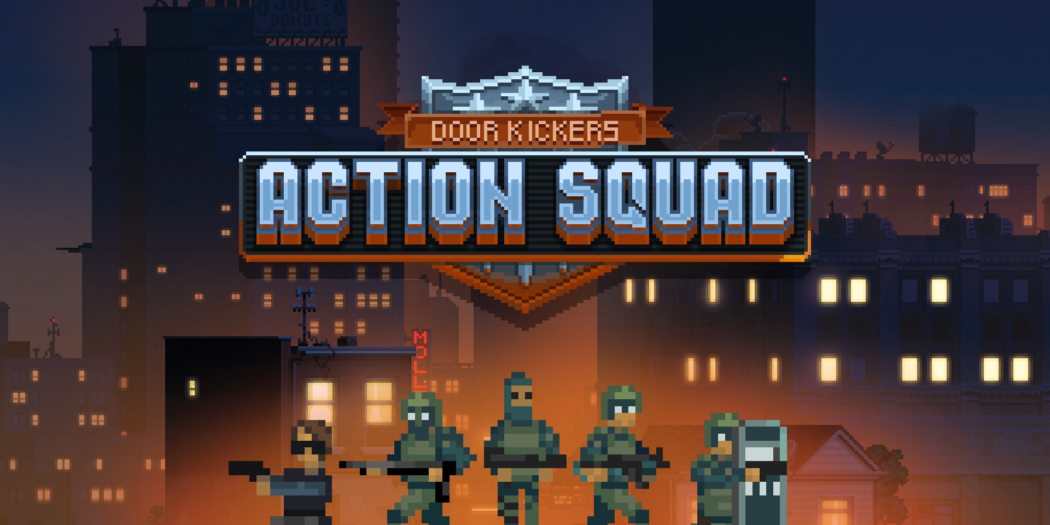 Bring On The A-Team

Twitch reflexes and a decent weapon can make up for a poor tactical move on the player’s part. Instead of being an indie take on the S.W.A.T series, Door Kickers: Action Squad shares more similarities with games like Hotline Miami and Broforce.

A tongue-in-cheek option to turn on antialiasing made their feelings on the matter apparent. The pixellated style remains spot-on – beautifully rendered backgrounds and well-animated 2D sprites mesh well with the fast gameplay.

There are several standout environments within the neat 60 level package here. From stopping a bomb on a moving train to freeing hostages from a nuclear silo, levels feel unique and varied. The gorgeous pixellated sunset belied the true chaotic nature of the gameplay, however.

But an amped-up, energetic soundtrack keeps players grounded in the fast-pace required by the game. It’s fantastic – reminiscent of 80’s action dramas and evoking a buddy-cop vibe. Therefore, it tied nicely into the cooperative mindset of the game. 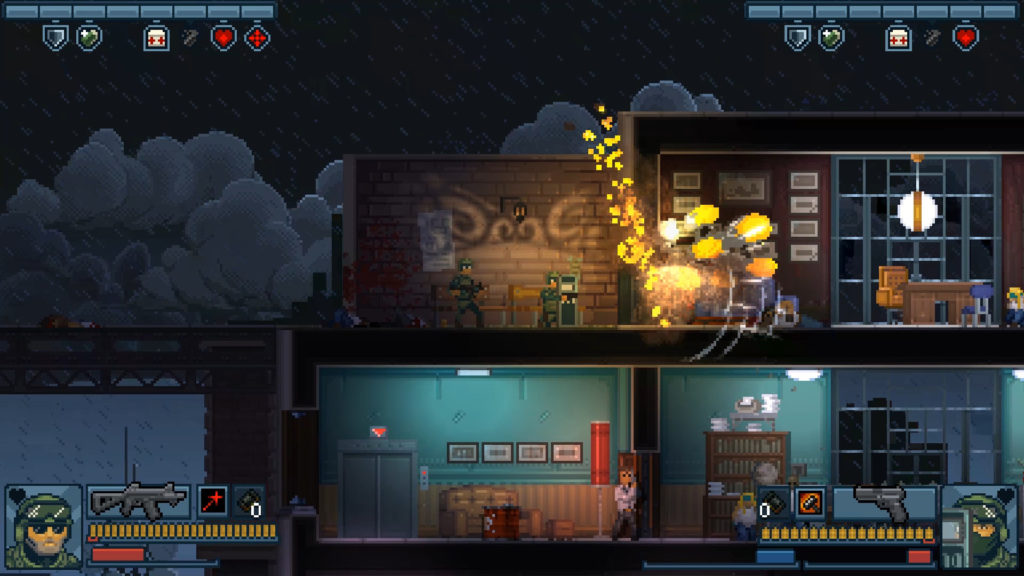 Though playing entirely solo remains an option, Door Kickers: Action Squad seems designed for co-op action. With bad apples in a room ready to take players down, there are several instances where approaching from multiple directions becomes a boon. Each of the five available characters fills a specific tactical role.

While the loose-cannon breacher may be able to take down a room full of enemies quickly, his shotgun may inadvertently kill the hostages they guard. With online and local co-op functionality baked in – and seemingly emphasized – your buddy can choose another character with more finesse or defense.

For example, choosing the shield character provides an excellent tank for taking enemy fire. Coupled with the stealth of either Agent Fergie or the Recon characters, effective co-op teams can make short work of the criminal’s traps. Gadgets and gear further add tactical mindsets to the chaotic sidescroller as well. Operators come with multiple gun options, tactical kits, and throwable devices available to them. Therefore, there’s a considerable amount of variety available as you level up respective operators.

But don’t get too comfortable with your operator. For different levels throughout Door Kickers: Action Squad require a particular set of skills to accomplish the task at hand.

To that end, the game encourages a trial-and-error mindset as you figure out which combination of operators will get the job done. The singular most glaring issue of the game came from the long loading time required to hop in after death.

Unfortunately, the time taken to go from failure screen back to the mission proper contains an unnecessary restart back at the main menu. This hurts the fast-paced nature of the game.  With dying a common occurrence in the title, the added time Action Squad takes to reload wears the player’s patience thin. 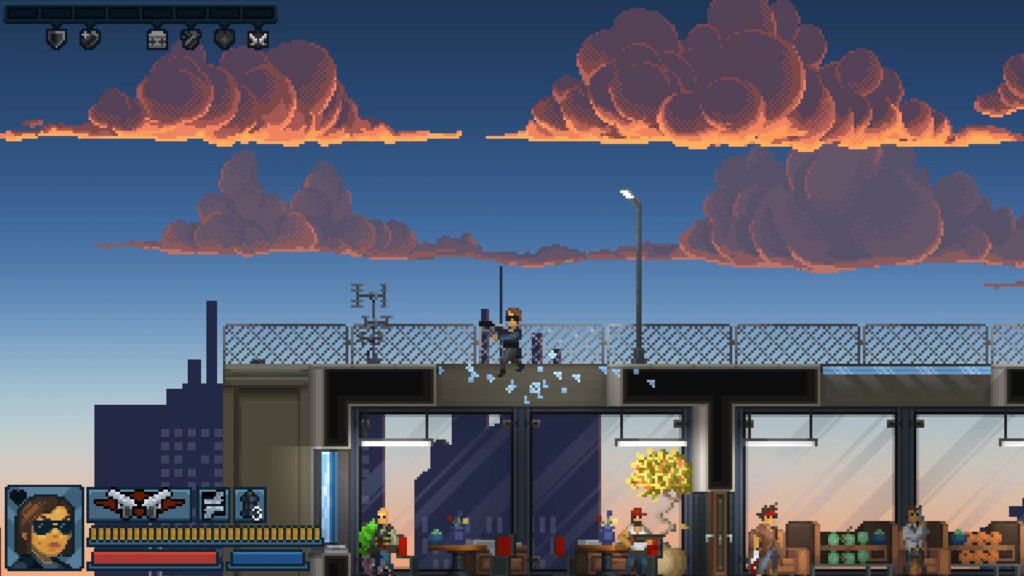 That major oversight turns Door Kickers: Action Squad from an enjoyable time into a frustrating exercise. A high of successful missions quickly turns into downbeat frustration as players become stuck on a new challenge.

With a unique pixellated style, fast-paced gameplay, and a bevy of playstyles available, there’s a lot to love about the game. But long times to load back into the game make longer play sessions completely out of the question.

With an update allowing players to get back in action quickly, Door Kickers: Action Squad could live up to its potential. As it stands, however, any more than a short burst of gameplay will leave you frustrated with the current challenge.

Mike Allio is a writer from the Greater San Francisco Bay Area in California. He's a passionate creative, and when he's not writing he loves playing video games. Some of his favorite series have darker tones to them - Dark Souls, Bloodborne, and Mass Effect are just a few of his favorites. Check him out on Twitch.tv/adaywalker, and follow his Twitter handle @TheMikeatNite to learn what he's up to.
@TheMikeatNite
Previous Playmobil Fishlegs and Meatlug (Toy) Review
Next 2K updates fans on WWE 2K19 with match-types, overhauls, and more