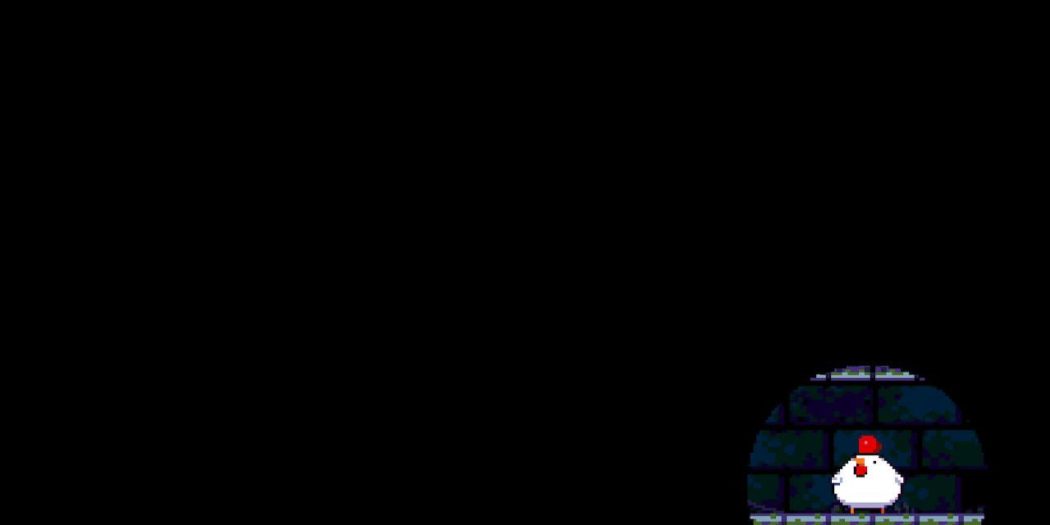 Bomb Chicken, originally revealed for the Switch during a Nintendo Direct, launched on July 12. It was missing from that week’s press releases, which meant it may have gone a bit too under the radar. How that happens to a game paraded by Nintendo on their own platform is a mystery.

But the real mystery is exactly how many bombs can fit in the bomb chicken at a single time. 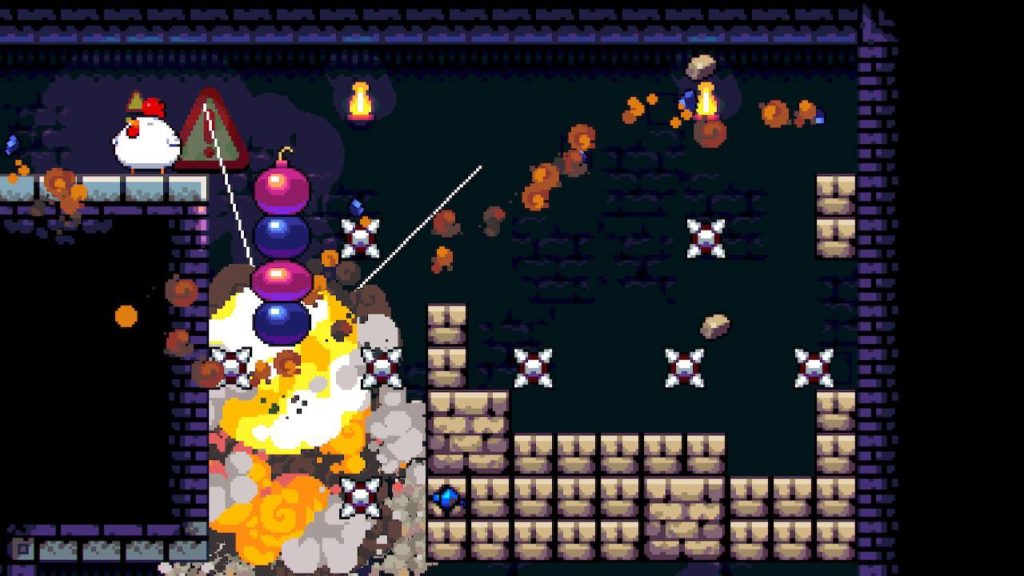 The game is back-to-back rooms of puzzle-action-platforming. 29 stages full of them. It’s a gauntlet that requires pixel-perfect chicken placement and a whole lot of gumption.  Your every single button press can kill you, after all.

It doesn’t matter if you hit A, B, L or ZR: your titular bomb chicken will lay an explosive that’s as capable of knocking out foes as it is BBQing fowl. You lack the ability to jump, meaning your only method of vertical ascension or descent is via popping out a live one.

No word yet on whether or not the bombs are fertilized.

Let’s say there’s a doorway at the top of the 2D, left to right (or top to bottom, or right to left, or bottom to top, sometimes) screen.  Instead of jumping, double-jumping, wall-jumping, or rocket jumping, your approach is to lay literally as many bombs as you can, until you’re sitting on a tower of explosives.  Dismount quickly, though, because once one of them goes off, it’s a matter of seconds until the explosions make it back to you. 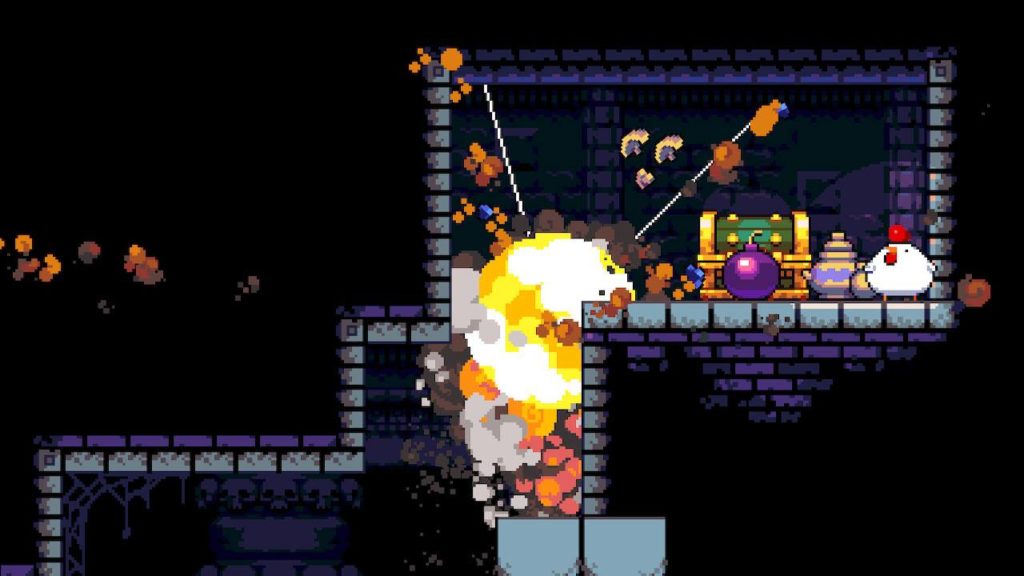 Obstacles range from cannons to lava to platforms that will disappear beneath you. While each area isn’t separated by a world map, there are different, as they say, worlds, wherein that obstacle is pushed as far as it can go, introduced in safety (or as safe as a chicken can get, when filled with explosives) before being combined with as many obstacles and enemies as you can wrap your head around. I bounced across bats while safe landings burned all around me, and I ran from invulnerable ghosts across platforms that dropped when I stood on them. Right into lava and fireballs.

Devilishly placed blue crystals are required for heart upgrades, which are the equivalent of lives. If you have five hearts, dying six times will show you a screen you’re going to become quite familiar with, because Bomb Chicken is a bit of a deviled egg. 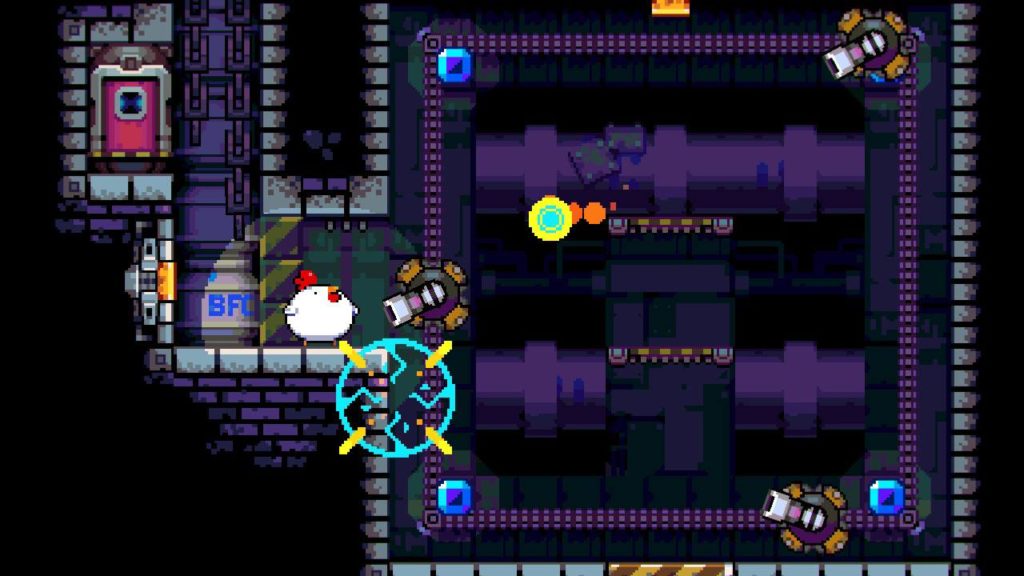 The good news is, any blue crystals you picked up will remain yours as long as you left the room you found them in, even if you do get game over. (This does not, however, carry over if you quit the game to fight for Team Squid, justice, and equality).

The bad news is, there’s still nothing more frustrating than getting a game over in the only room you have trouble with, and having to run all the way back there, every single time.  Bomb Chicken isn’t as generous as games like Celeste, which is too bad, because pressing A and waiting doesn’t kill you in games like Celeste. Due to its nature of all ups and no downs in action and danger, Bomb Chicken is a game I find difficult to play at length, which is why it’s now July 17th, despite its relatively short run-time.  Much longer, and I think I would have died from heart disease. 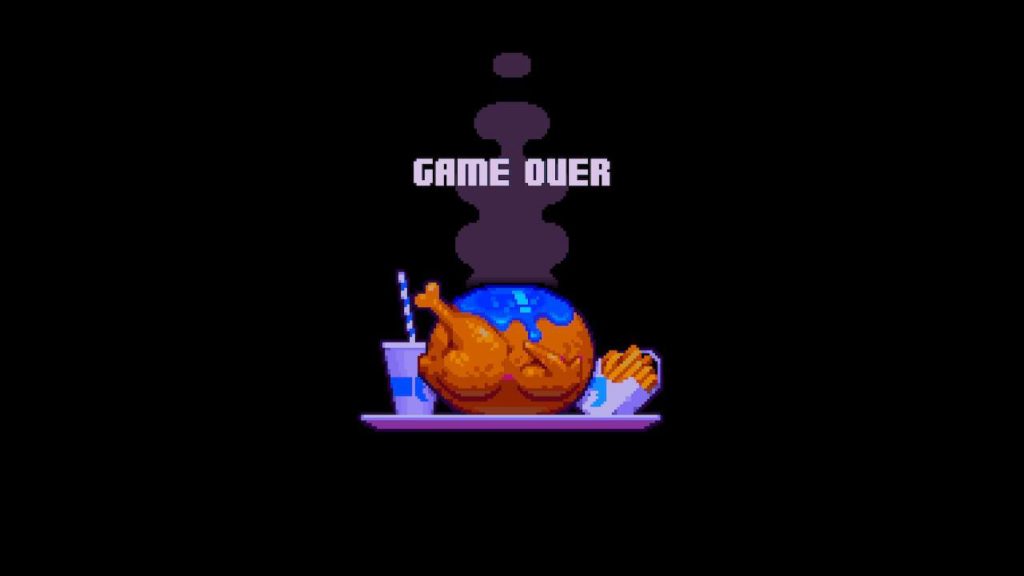 Unless that longer run-time was due to more bosses. There are precisely not enough bosses in Bomb Chicken. These three-phase, three-hit encounters are better (and healthier) than a bucket of fried chicken.

It should be mentioned that Bomb Chicken has absolutely beautiful pixel art and adorable animations. Case in point: when you respawn, your chicken will pull back on its feathered coat. And don’t let my choice of screens fool you- there is plenty of color in Bomb Chicken. Just as important, the chicken sounds exactly like a chicken. Source: me, an owner of chickens, who, several times while playing, thought I was hearing my actual chickens. It is for this reason that I also felt particularly invested in getting my chicken from once side of every lava hellscape to the other.

Bomb Chicken costs $14.99, and is available now exclusively for the Nintendo Switch. While we were busy beating the game, developer Nitrome announced that they are both working on more Nintendo Switch games and on maybe talking to some “special folks” about a possible physical release. 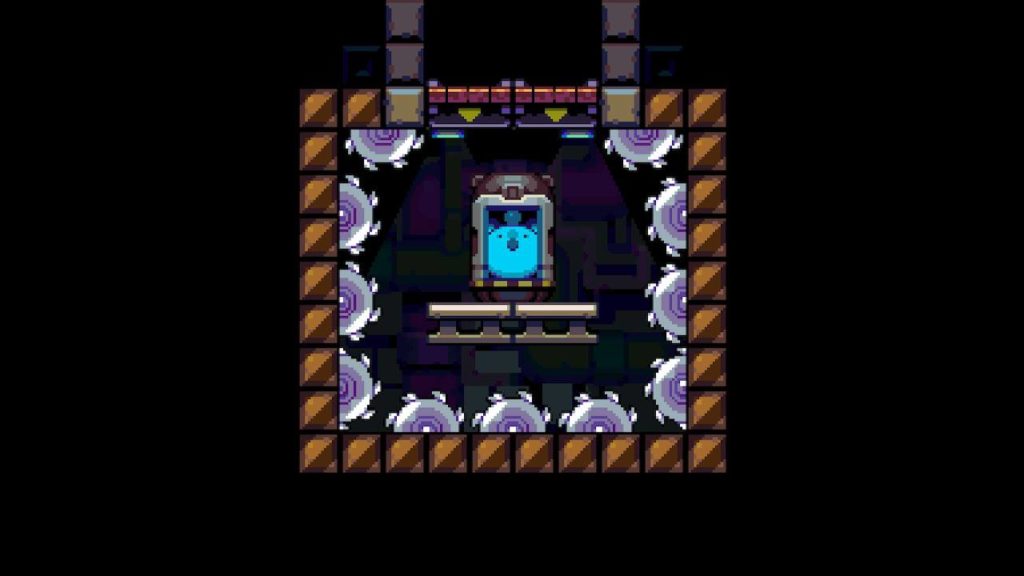 If a Hollywood blockbuster had heart, was drawn in pixels, and starred a chicken, it would be Bomb Chicken. Because there are explosions. While my metaphors are rarely good, Bomb Chicken certainly is, a helping of retro eggs just the way you like it.

Brutal Gamer's Nintendo Editor began his gaming life a little late- at five years old. But he's made up for it in the two decades since, gaming and writing about gaming with the same passion, fervor, and unrelenting love as his five-year old self.
Previous Sideshow Toys expands Star Wars Mythos line with art prints
Next SDCC 2018: Mars Attacks! once again returning to comics this October