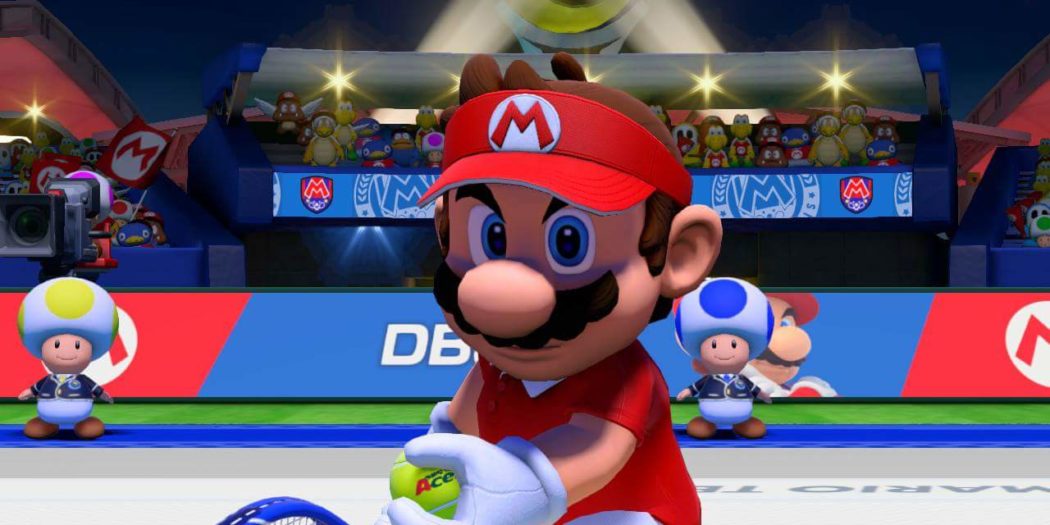 Mario Tennis Aces Online Pre-Launch Tournament is Live, and We Played It

This weekend, get your hands on the new Mario Tennis Aces (releasing on June 22) via the online tournament beta. We gave it a shot of our own.

The Mario Tennis Aces one weekend tournament beta has begun (and will run until Sunday, June 3, 11:59 PM).  Naturally, we downloaded it and gave it a proper shake, and you should too (especially if you want to unlock a Mario costume for the main game).

The beta serve-fest comes with a tutorial to show you the basics (explaining all of the new mechanics and controls), which will let you wrap your head around the new power options.

If you’re unfamiliar with the changes in Mario Tennis Aces, you should know there’s a new power meter that allows for several kinds of offensive and defensive measures. You can spend your meter to slow down time and chase down escaping balls, or fire the ball into a precise corner, or hit the ball so hard it can break your opponent’s racket (in the beta, each tournament player is supplied two).  The power meter fills by hitting the ball with charged hits, or by landing smooth acrobatic flips. These skills help you catch up to the ball laterally and down the court, but mistime it and you’ll find they cost meter instead of building it.

The meter adds an element reminiscent of Mario Power Tennis’s offensive and defensive skills, leading to longer rallies.  Paying attention to your opponent’s meter and spending yours accordingly is important to scoring points. Of course, it can be tough to swallow if you blow your entire bar on an offensive shot that doesn’t work (or backfires entirely).  It’s important to strategize your use of the meter, using it for points that really matter. Something I discovered quickly was there’s no point in recovering a ball by slowing down time and spending meter if your opponent can just as easily slap it across court and leave you in the same position you were before. 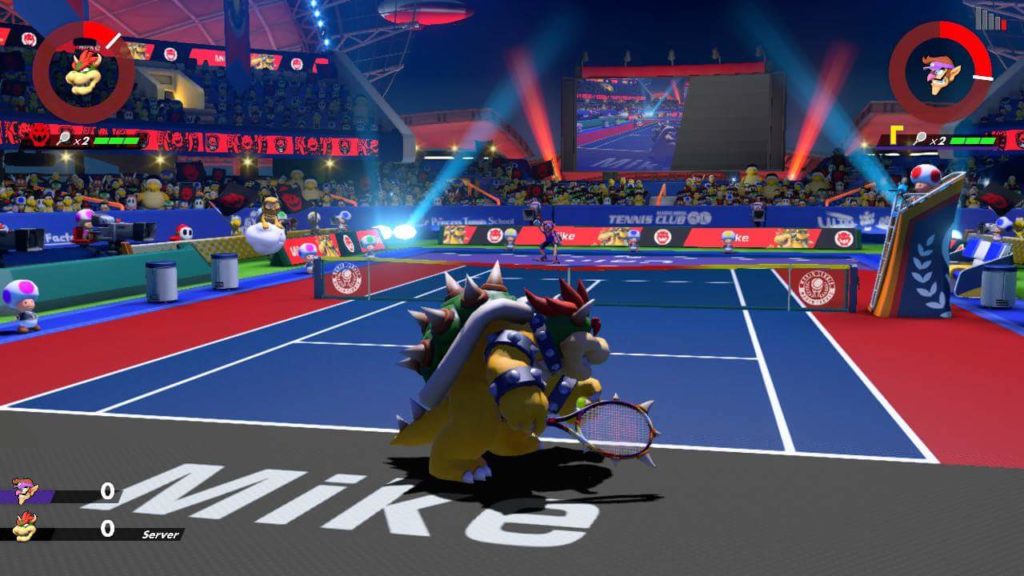 The tug and play of meter is a huge boon to Mario Tennis Aces, and even more so is the lack of the decisive circles from Open and Grand Slam.  Where you aim the ball, how you make your opponent run, and your positioning are all far more important, and it feels much more like your shot decision is yours, and not the game’s. This means no blue circles super powering slices.  There’s only the occasional star showing you where the ball will land and allowing you to fire off that pin-point corner shot.

The beta features the ability to play against bots in quick matches, and even this helps you stockpile points.  Get to a hundred, and you’ll unlock Waluigi. The highest scores will be recorded on the game’s site after the beta tournament’s resolution. The nine character spaces have me convinced you’ll be able to try more of Mario’s mainstays in the beta. 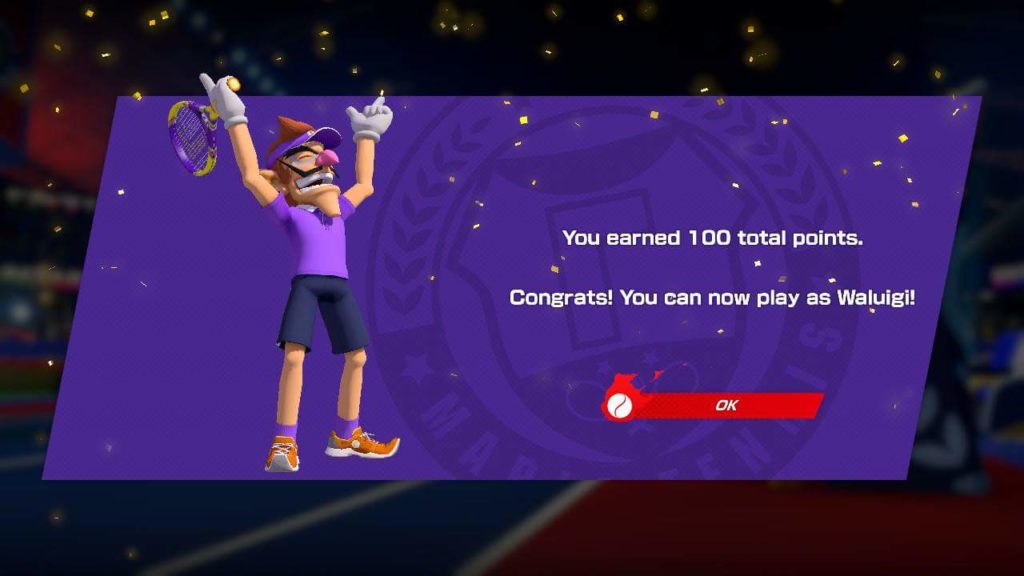 Unfortunately, one thing has kept me from finding out: the occasional crippling lag.  Matches can be entirely unplayable when you jump online, depending on your and your opponent’s connections.  Body shots are common when you can’t react, and it’s almost impossible to keep a rally when the lag gets going. I had several matches back to back that were besieged by this issue. I can’t speak for my connection, here in the relative countryside of Japan, with no ethernet adapter, in any sort of positive light, but the number of clean, smooth matches I’ve had has me worried it’s somebody else’s fault. 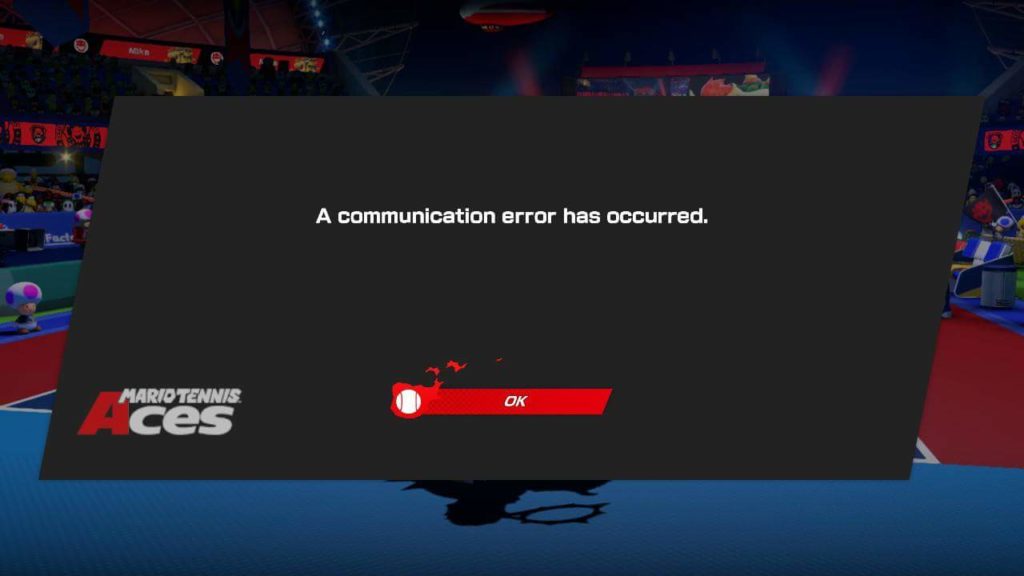 It’s two games to win a match in the tournament, so even fiercely even rallies won’t last very long.  Each tournament requires four wins for a victory. I haven’t gone that long without a loss (I’d like to blame them all on lag), so I can’t tell you what the payout is like for that coveted score.

Of course, I have another excuse, which is the frustrating button combination leading to your acrobatic side-hopping, shell-sliding last ditch effort for recovery.  Pressing X twice while tilting the left stick in a direction causes you to hop. Pressing X while holding your stick up or down gives you a lob or a drop shot. As someone who has grown accustomed to hitting my button a couple times to really make a statement, this has caused me to miss several easy returns by inadvertantly leaping away from the ball.  In my defense, the game did suggest that pressing the hit button twice makes you return faster. 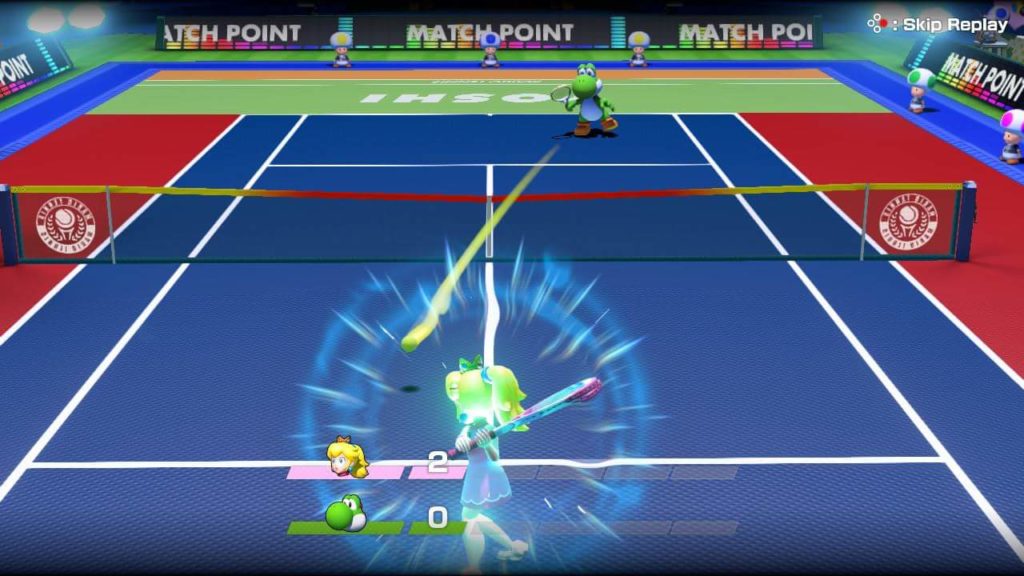 Outside of that minor complaint, and the lag, Mario Tennis Aces has the singles gameplay down.  The beta doesn’t have my preferred method of play (doubles with a friend), so I can’t make an assessment of how the new mechanics will change the ol’ two v two, but I’m excited for the full game release to find out.  I also can’t wait to save Luigi in Mario Tennis Aces’ return to a feature-complete game.

The Mario Tennis Aces beta is available for the rest of the weekend, and the final game will launch on June 22.

Brutal Gamer's Nintendo Editor began his gaming life a little late- at five years old. But he's made up for it in the two decades since, gaming and writing about gaming with the same passion, fervor, and unrelenting love as his five-year old self.
Previous DC Super-villains presents the darker side of LEGO in Traveller’s Tales’ latest
Next Solo: A Star Wars Story (Movie) Review