Solo might be the most controversial Star Wars movie of all time. Opening to disappointing numbers last weekend, the film was on the receiving end of a minor boycott and general fan dislike even before it opened. Does it deserve it? Is it really a brutally bad flick? Eh, not really.

It’s been a bumpy road to theaters for Solo: A Star Wars Story. The movie, which is the second film in the “Star Wars Story” line, was beset with directorial issues. The former directors, the team of Phil Lord and Chris Miller, was unceremoniously replaced halfway through filming by Ron Howard. Howard is of course, a legend in the game, and to have him helming a Star Wars movie is pretty cool. All the same, his hiring is not why the duo was removed.

I don’t actually think that there was an official reason given for it, but there were rumors. Apparently, and you have to take this with a grain of salt, Lord and Miller were crafting Solo to be a different film than the Lucasfilm (Disney) brass wanted. The ensuing conflict supposedly led to Howard’s arrival.

Then there was the pre-release hate-storm

A seemingly large chunk of the fandom was extremely critical of Solo before they even saw a frame of it in theaters. Some thought the rumored set-troubles were surely going to result in a broken film, some didn’t like actor Alden Ehrenreich’s casting in the title role, and some wondered why we were getting a Han Solo movie at all. The character played such a huge part in the OT after all. It strikes me that it wasn’t necessary to give him his own movie.

Finally, and this probably includes everyone inferred above too, there were a good deal of Star Wars fans who didn’t care for the way Disney was handling the franchise in general. I’m sort of in that boat too, since I don’t like the sequels at all. Though I’ll add that I did really enjoy Rogue One.

So what’d I think of Solo, now that I got all the pre-release stuff out of the way? Brace yourself, because this is a bold statement: it was okay.

The heroes (and villains)

First, let’s talk Ehrenreich. The actor was actually good enough as Han, though not without issues. I would have greatly preferred if he tried to act like Harrison Ford in the original films, but he didn’t go that route. Instead, what we get here is something of an original take on the character. Though I will add that there are some Han-isms sprinkled in. His performance just kind of… is. Much like Donald Glover’s Lando Calrissian.

Glover has been talked about pretty favorably in the role, but I also found him to be just “good”. Much like Ehrenreich, he does a solid job, but there’s nothing here that’ll knock you over. That’s not to say that he doesn’t have his moments, and I will add to that he does a much better job of trying to follow original Lando Billy Dee Williams than Ehrenreich does Ford.

Still, I doubt you’ll be leaving the theater being completely sold that Glover is Calrissian. Oh, and I have to add a bit about the “pansexual” commentary from writer Jon Kasdan. And that “bit” is that I just don’t see it. Like, at all, and I’m starting to wonder if Kasdan made the whole thing up just to get more attention.

Yes, there’s stuff where (his droid) L3-37 talks about Lando and her having a relationship, but I got the drift that that was pretty much tongue in cheek. I saw it as more like wishful thinking on the half of L3. Maybe it’s me, but that’s what I got from it. 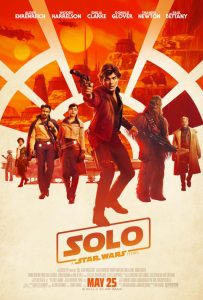 Speaking of, L3 is far and away the worst Star Wars droid ever

She’s painfully annoying, and almost all of her big moments (some of which could have been cool) come off as comical. I don’t know if that was the intent or not, but it’s the result.

There’s a (presumably) sad moment between her and Lando too, which is one of the highlights of the film – and I mean that in a comedic way. Try not to laugh when you see it (you’ll know it when you do).

On a side note – could we just drop the whole “sassy droid” thing in every single Star Wars movie? It’s getting old.

As for the rest of the characters, they’re all likewise okay

Emilia Clarke as Qi-Ra was decent but forgettable, as were Enfys Nest and Dryden Vos. Vos had a great look to him with his facial scars, but we get zero info on him, which is another missed opportunity. One the flip side, Woody Harrelson’s Beckett had almost too much background. And the real villain of the film, the one with only a cameo appearance (I won’t name him), outshone all of them.

As for Chewy, he is Chewy. He’s almost the same in every movie that he’s in, and I’ve found that you either love him or you don’t. One weird thing about him here though, is that I don’t think he’s as tall as he has been. You might be tempted to peg that on the actor in the suit, and I honestly can’t tell you how tall he is. So maybe that is it.

Though, with the ability to resize characters as commonplace as it is, it would be strange. Why not just keep him at the same height? He just doesn’t look as cool to me here.

A decent story, but one with missed opportunities

As to the actual story of Solo. I don’t want to spoil anything, because there are some actual cool things in here. But eve with moments like the Kessel Run and the planetoid battlefield, it’s nothing special. What could have been a really cool backstory (as unnecessary as it may be) for Star Wars’ favorite rogue is instead a somewhat dull and formulaic “hero” story.

Yes, there are double crosses, and Han shows clearly a few times that he’s not a knight in shining armor, but more often than not he simply finds himself as a semi-comedic goof of a hero. That is part of his charm as a character, I get that, but the goof-factor it’s a little more pronounced here.

Basically, the narrative shakes out like this: Han escapes Corellia and joins the Imperial Navy. Through a series of events, he finds himself as a part of a crew of thieves, attempting to nab a large amount of fuel for a criminal syndicate. It’s over the course of that adventure, that we meet Lando, re-meet Han’s old flame Qi-Ra, and get introduced to the Millennium Falcon.

But all of the big moments are kind of letdowns

As someone who saw the original films in their original state, Han becoming friends with Lando, winning the Falcon from him, and even meeting Chewy for the first time had been the stuff of legend. And in this movie it all just kind of happens.

Some of it even feels tacked on. It’s almost like the writers didn’t really care to make some of these moments a big part of the story, and just shoehorned them in at the last second. Really and honestly, if Disney was dead set on making a Solo movie, the story should have (and could have) been so much better.

And that’s kind of my thought on the whole movie. It’s not that I didn’t have fun, because I did, or that it has no redeeming qualities, because there are moments here and there than are enjoyable – but everything could have been better. And some of those big moments actually came off as more of a tease of what could have been.

Solo: A Star Wars Story isn’t the worst film in the franchise, but it’s not remotely the best either. I’d probably place it at the middle of the pack, and it’s middling box office performance perfectly displays that.

Could have been better, but not terrible

The characters are very iffy. And that includes Han and Lando - 56%

The story is decent, but not filled in enough - 73%

I can't say I didn't like Solo on a few levels. It's a fun action, sci-fi movie that's got some actual great scenes that I dug a lot. But it honestly should have been much more. This is Han Solo, and a movie built around him should have been wall-to-wall fun. And this isn't.

Jason's been knee deep in videogames since he was but a lad. Cutting his teeth on the pixely glory that was the Atari 2600, he's been hack'n'slashing and shoot'em'uping ever since. Mainly an FPS and action guy, Jason enjoys the occasional well crafted title from every genre.
@jason_tas
Previous Mario Tennis Aces Online Pre-Launch Tournament is Live, and We Played It
Next West of Loathing Review: A Really Wild West