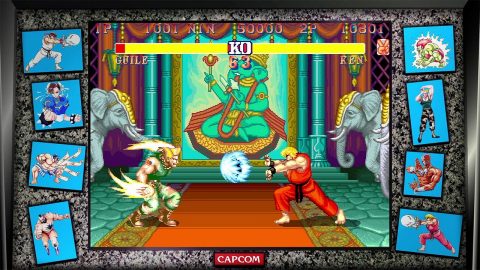 That’s Street Fighter Alpha in that trailer of course. It’s also one of the biggest reasons I am dying to play Street Fighter 30th Anniversary Collection. Mainly that’s because I haven’t had the pleasure of playing an SFA title in years, and I’m really looking forward to firing the sub-series up again.

Maybe you’re more of a Street Fighter III fan though. Well you’re in luck there too, since every iteration of that title is included here too. More likely than either of those things though, is that you’re a classic SFII devotee. And if that’s you, then you’ll probably be plenty happy with the Street Fighter 30th Anniversary Collection too.

I’m pretty confident with all of the above, since the set includes:

Even better? Every game on that list with an * is playable online. That basically means that the “final” game in each Street Fighter era is playable with your buddies over the net. How cool is that?

You will notice however, that the aforementioned Street Fighter IV isn’t on that list. That’s because it’s not technically a part of the collection. I don’t really get why it’s not to be honest, but the game was instead a bit of bait to get people to pre-order the game for any platform but the Switch. For some reason, Capcom didn’t think that it was necessary to port the game, which is still pretty popular, to the Nintendo platform. Oh well, at least we’re getting what we’re getting.

And we’re getting it today.

Jason's been knee deep in videogames since he was but a lad. Cutting his teeth on the pixely glory that was the Atari 2600, he's been hack'n'slashing and shoot'em'uping ever since. Mainly an FPS and action guy, Jason enjoys the occasional well crafted title from every genre.
@jason_tas
Previous Remaster versus Remake and the Dark Souls Remastered Fiasco
Next SEGA celebrates the launch of its Classics with Electric Method music video