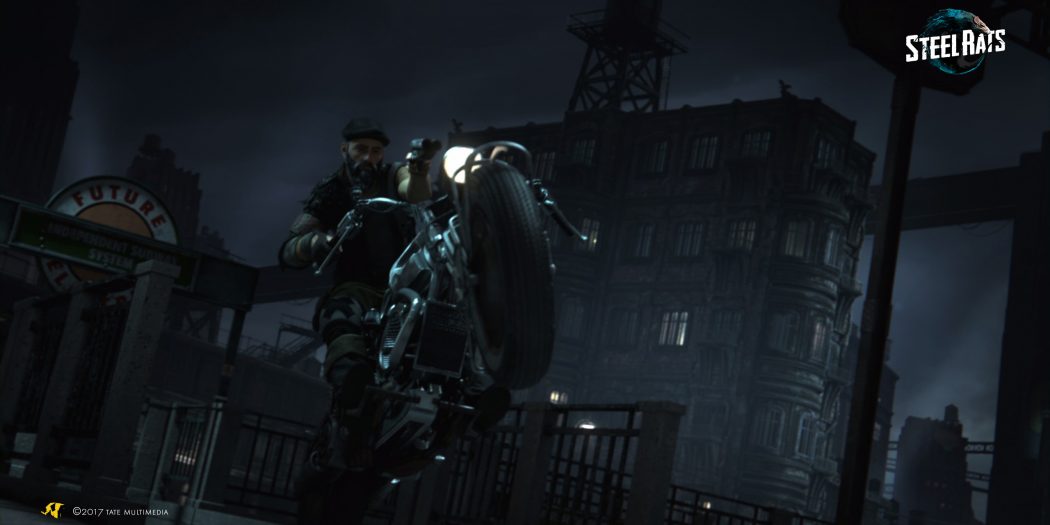 Steel Rats. Sounds quite terrifying if you try to picture it. Fortunately for us, developer Tate Multimedia had a different vision for it. Steel Rats is a 2.5D destructive, high octane motorbike-combat, action game.

You control of one of four bikers each with their own bike and weapons. Take to the streets to defend your home town against the evil junkbots.

Available to players at Rezzed are 3 separate levels of the game, described to me as “pretty easy, difficult and really hard”. With a hint of shame I accepted the easy level.

Steel Rats is highly psychics based. If you pull back you’ll lift the front of the bike up. Botch a landing and you’ll fall off and die. You can switch between two lanes while tearing through the levels. However, thanks to your trusty wheel-saw, you can cut through most obstacles in the way. It slows you down, but it looks awesome.

Bike Combat is a lot of Fun

Combat via motorbike has been executed beautifully. You can hack through with your wheel-saw, use you character specific weapon or simply swing the end of your bike around to smash them to pieces. You can also dash to jump across gaps or if you really wanna squish those junkbots good.

definitely took a few minutes to get used to the feel of the controls. Being 2.5D, on a motorbike and being able to move up and down was quite unfamiliar to what I’m used to.

Steel Rats really is quite a pleasure to look at just to add icing on top. From wrecked vehicle littered streets to jumping past a moving train with a blue lit night sky.

There is currently no solid release date for Steel Rats but it will be sometime this year. It will be available on PC, PS4 and Xbox One. If you want to find out more head to their website or Facebook page.

Massive game and movie enthusiast. In any free time I'm always playing something or watching something. I didn't choose the hermit life.
Previous EGX Rezzed 2018 Hands-On: Stay
Next The Walking Dead 816 “Wrath” Recap