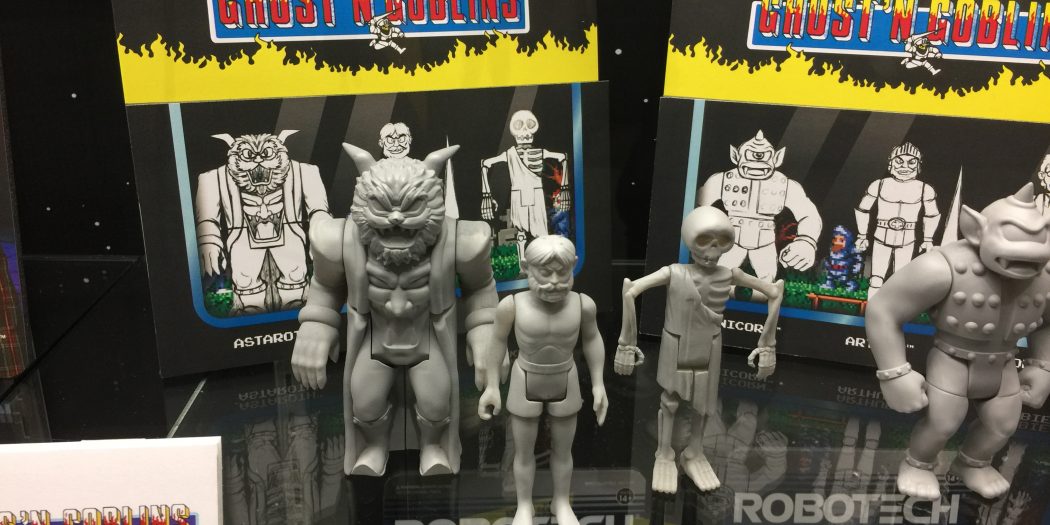 Super 7’s current headlining series of toys might be Masters of the Universe, but the toy and collectible maker actually has a whole mess of cool stuff. That includes the new MUSCLE successors and a lineup of… Halloween buckets?

Just so you know, we’ll be presenting two different articles covering what Super 7 had on display at Toy Fair. Honestly, there’s just too much cool stuff for one post. It’d end up being way too long. So be sure to watch for our Super 7 Masters of the Universe coverage, coming in a separate article (probably tomorrow).

But even without the Masters, Super 7 is a collector-toy company to be reckoned with.

For a while now, Super 7 has been running with the MUSCLE banner. Little rubber figures that became popular in the 80s, MUSCLE (Millions of Unusual Small Creatures Lurking Everywhere) figures were as varied as any other toy line out there. When Super 7 picked up the license, they eschewed the former Kinnikuman (a Japanese character) focus. Long story short, they got way more pop-culture-centric.

There were Aliens, Mega Man, and Masters of the Universe MUSCLE. Heck, they even made a t-shirt for the darn things (which I have and is awesome). Well, forget all that, cause MUSCLE is seemingly gone. In its place? Keshi.

Essentially the same things, Keshi figures are kind of like the MUSCLE of the Far East. Honestly, that’s kind of weird since the characters in the MUSCLE line were all of Japanese designs anyway. In any event, the more things change the more they stay the same.

But while the figures are staying more or less the same as legacy MUSCLE figs, the line is exploding. Not only are Macross Keshi on the way, but so is the likes of Pee Wee’s Playhouse. How cool is that?

Oh, and just for the record, the popular “garbage can” sets will indeed be sticking around.

If you know what Funko’s Pop! figures are, then you probably also know what ReAction figures are. But just in case you don’t, they’re basically 4″ scale figures that look like stuff most toy lines were churning out in the 1980s. They’re super-cool and really hit the spot, in a nostalgic way.

Masters of the Universe has been the biggest ReAction line for Super 7, but they’re growing the series in a big way this year. Pee Wee’s Playhouse, Alien, Planet of the Apes, Ghosts ‘n Goblins, Hellboy, and Universal Monsters are all on the way.

That subheading probably looks a little off. I get that. But these are just too cool to not tell you about. Not only is Super 7 producing a line of Halloween buckets that would look right at home in any collector’s setup, but they’re actually usable.

Yep, these awesome items are built to be used, so kids can actually take ’em out trick or treating. Seriously, how cool is that?

But wait, there’s more! While the above was kind of neatly fit into a few categories, the stuff here kind of… isn’t.. There’s glassware, there are Transformers and Universal Monsters figures, and more. Have a look at even more neat stuff on the way from Super 7.

Jason's been knee deep in videogames since he was but a lad. Cutting his teeth on the pixely glory that was the Atari 2600, he's been hack'n'slashing and shoot'em'uping ever since. Mainly an FPS and action guy, Jason enjoys the occasional well crafted title from every genre.
@jason_tas
Previous March 7th Valiant Previews: Bloodshot Salvation goes dark in issue #7
Next Ghost of a Tale Release Date Announced