Toy Fair might not be till the middle of next month, but that’s not stopping Mezco from revealing some of their wares. Here comes the (Homecoming, homemade-costume) Spider-Man.

Before we get started here, know that Mezco has a “proper costumed” Spider-Man out there or on the way. Actually they have two if you count the Miles Morales version. So unlike with Thor and Hulk, which got Ragnarok versions, this Spidey is actually quite welcome.

Hardcore fans especially should dig it since it’s not just another look at the Wed-head, but also from the Homecoming movie. That’s a pretty big film since it was the character’s first in the Marvel Cinematic Universe.

Now, honestly, I’m not a fan of the Spidey “tech” suit as seen in the film. But I did dig the homemade suit that he wore before he got the Stark-made edition. It’s actually pretty neat, and I’m a (very) longtime Spider-Man fan.

But let’s get back to the action figure, since it’s kind of the point here. If history holds true, then this one will not be shipping this year. I assume you’ll be able to pre-order him sometime soon though, so watch for that.

Here’s the skinny on Homecoming Spidey: 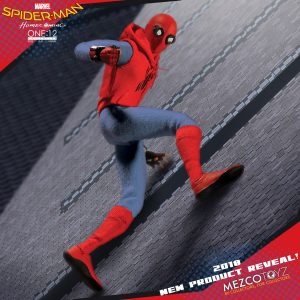 Skillfully executed in design, Homemade Suit Spider-Man’s cloth outfit replicates that of the movie version. From the strings on his hoodie to his knee-high socks, no detail was overlooked. Using a newly sculpted body to accurately reflect the build of teenage Spider-Man, this figure features over 30 points of articulation and is approximately 16cm tall.

Jason's been knee deep in videogames since he was but a lad. Cutting his teeth on the pixely glory that was the Atari 2600, he's been hack'n'slashing and shoot'em'uping ever since. Mainly an FPS and action guy, Jason enjoys the occasional well crafted title from every genre.
@jason_tas
Previous 182 US Toys R Us Stores are Closing
Next Rise of the Tomb Kings rises for Total War: Warhammer II