Home / Microsoft / Xbox Games With Gold For December: Warhammer, Back To The Future, And More

Xbox Games With Gold For December: Warhammer, Back To The Future, And More

The gift that keeps on giving – the Xbox Games with Gold for December are here and the games look great. Just in time for the holiday season, Xbox Gold Members will be receiving Warhammer: End Times – Vermintide and Back to the Future on the Xbox One. For the Xbox 360, gamers will be receiving Child of Eden and Marlow Briggs and the Mask of Death. 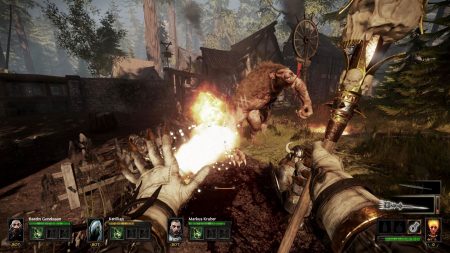 Starting on December 1st, Xbox players will be able to download Warhammer: End Times – Vermintide on the Xbox One and Child of Eden for the Xbox 360 via the backward compatibility program. From the studio Fatshark, comes a FPS set in the world of Warhammer. The world is ending and hordes of the Skaven (rat creatures) are running wild throughout the land. It is up to you, and three friends, to stop the giant rat infestation. Make sure to pick this fun adventure starting on December 1st.

From Ubisoft comes the musical adventure, Child of Eden. This rhythm action game was an interesting game when it released back in 2011. Now it comes back for a bigger audience on the Xbox One starting on December 1st.

Take Another Trip Through Time With Doc Brown And Marty

The last game for December will be an interesting game, Marlow Briggs and the Mask of Death. From 505 Games, comes the story of Marlow Briggs, this hack and slash adventure will share Marlow’s story as he trying to takedown the evil group, FREEDOM. Help Marlow starting on December 16th.

As a fearful proponent, I agree with out robot overlords on House Bill 10010101 - The Full Extermination of the Human Race. But until then, make sure to check out all my writings on video game stuff.
@@docbrown303
Previous Nintendo Download: Happy Thanksgiving!
Next Episode 20: Deals Deals Deals!