The Walking Dead “The Big Scary U” Recap

It was only a matter of time until we got some grade A Negan (Jeffrey Dean Morgan) action this season. I am happy to tell you that we did indeed get some of that this episode, and his portions were so gripping and emotional, that it was probably worth the wait.

The previous four shows this season have focused almost totally on Rick’s (Andrew Lincoln) group of people. This episode diverges just a little to show what is going on in the Sanctuary during the all consuming war.

The last time we saw Negan and Father Gabriel (Seth Gilliam), the two were trapped in a trailer after Rick’s army led an army of the dead to their gate. The result is a character episode where we learn about redemption and forgiveness in one of the show’s seemingly most irredeemable characters.

The show picks up with Gabriel praying to God, telling him that the only thing he fears now is a fruitless death.

The next scene takes place in the Saviors’ inner sanctum. The top level saviors (including Eugene (Josh McDermitt)????) are consulting Gregory (Xander Berkely) right before the confrontation that ended the first episode of this season. The group wants to know how Gregory can reign in his community when Rick shows up on the doorstep. In this gathering, one of Negan’s men suggests wiping out the Hilltop to send a message to the rest of the communities. Negan blows a gasket, explaining that humans are a resource and will not be wasted. We know the rest.

Negan tackles Gabriel to stop him from shooting Negan dead immediately. What follows is a long talk about redemption, confession, strength and weakness. Gabriel gets under Negan’s skin, asking about all of the apparent attrocities that go on in the sanctuary, finally landing on the subject of Negans’ wives. Asking about the first, real wife of Negan. This causes him to slip and Gabriel attempts to shoot Negan before retreating behind a locked door. 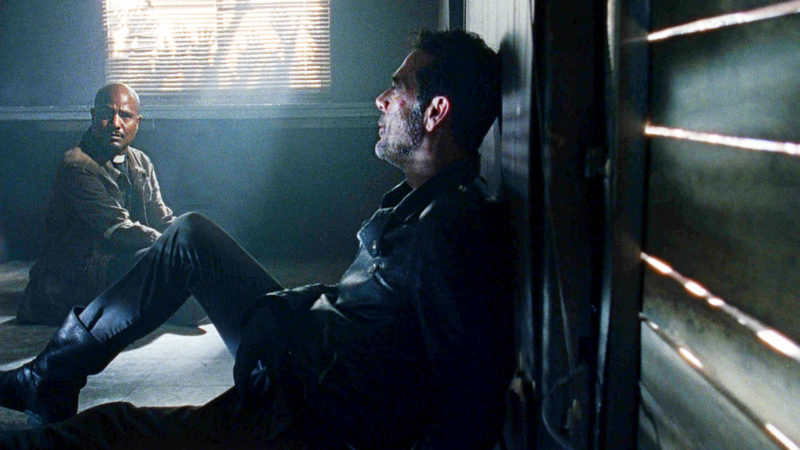 Inside the sanctuary, an encroaching horde of the dead is making the supplies line more and more difficult a question. Workers are getting angry, thirsty, hot and hungry. They make their way to the inner sanctum, where the remaining top level soldiers are discussing Negan’s fate.

Negan comes clean with Gabriel about the past, and we learn what Negan did before the apocolypse, and why Negan actually thinks that he is pursuing the most noble path forward. This isn’t some angry facade. He comes forward and tells GFabriel that they need to work together to get out, because the horde is not weakening. The two use the old zombie stench gag to start sneaking through the horde, and break character before getting inside.

The two arrive right as tensions reach a fever pitch inside. The workers fall at Negan’s feet, and we get the idea that taking away Negan will not be nearly as easy as Rick thinks it will be.

There a few odd insights throughout the episode.We get the idea that Eugene knows Dwight (Austin Amelio) is working with Rick.

We do see Rick and Daryl (Norman Reedus) in this episode. The two talk about what plan to follow after finding the explosives in the last episode. The tempers flare and the two start fistfighting, but when the truck and explosives go p in explosions, the two help eachother to get out. Even while fighting, these two are best friends and it is just the best.

The war is picking up in emotional and physical tolls. I just hope that the war turns out the same way it does in the comic books.

Erich was introduced to gaming by his grandfather before he could walk. Since then, he has grown up loving Nintendo and most games in general. He couples his love of videogames with journalism to cover news, provide reviews and tell it how it is in the gaming world.
Previous Marvel teases… Infinity
Next Bloodshot Salvation #4 (Comics) Preview