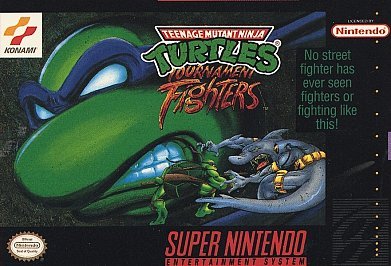 The Teenage Mutant Ninja Turtles got their first (and only) fighting game with TMNT Tournament Fighters. It’s still puzzling why they never got another.

The year was 1993, and Teenage Mutant Ninja Turtles mania was running wild. A stellar (for its time) cartoon led the way in an avalanche of just about everything you could imagine. And I mean everything. Seriously, there were TMNT-branded garbage pails and wall-clocks. I should know, I had a pile of it.

Then there were the toys. Playmates Toys is actually still producing TMNT action figures today, and they were the company making them decades ago. I always loved Playmates line because I was almost as big a reader of the comics (from Archie) as I was a viewer of the cartoon. Actually, I might have been a bigger fan of the books. The character list was always way bigger, and the adventures and stories just seemed much better thought out.

And that note brings me to the last piece in the Ninja Turtle puzzle – video games. Turtles games weren’t as ubiquitous as Turtles toys (etc…), but there were a good deal of them. Almost all of them stuck to the same formula though.

The NES’ TMNT through the SNES’ TMNT IV all were side-scrolling beat ’em ups. There’s absolutely nothing wrong with that, but they were all of the same mould. Actually, so were the handheld entries in the series. There was only one Turtles game that broke that mould – Tournament Fighters.

Though quite a few fans recognize Tournament Fighters as the fifth and final game in the original series, it’s actually kind of its own thing. Or, things, as I should say. Kind of a weird note – TMNT Tournament Fighters is actually 3 games. The NES, Genesis, and SNES versions are all very different titles, complete with original stories.

But that’s best saved for another time, since we’re here to take a look at the classic SNES edition.

The first thing that you’ll probably notice when you fire this one up, are the graphics. Cast in the same vein as Turtles in Time, Tournament Fighters on the SNES is colorful and quite well animated. I think it’s pretty easily the best-looking of the three versions. The Genesis puts up a fight, but the SNES edition comes out on top. The characters are a decent size too, and both standard and special moves look suitably cool.

Of course, you’ll find the Turtles pulling off a lot of moves in the game that you wouldn’t see then do anywhere else. Hey, this is a fighting game, so if Leo wants to toss a few hadoken-esque fireballs off his swords, he totally can. Just go with it.

Aside from the bizarro attacks, you’ll also find many of the more popular trappings of the 16bit/arcade “fighting game” explosion evident here. Stages all have unique personalities, and there are plenty of background characters standing around, cheering the fight. You’ll spot more than a few TMNT staples looking on, like the Neutrinos from Dimension-X.

All of this is framed by some pretty nice sound effects, and even voice. True, voice work wasn’t all that rare on the SNES, but most of what’s in Tournament Fighters is very solid. The tunes are decent too, though pretty forgettable.

The story is actually quite interesting in TF. It definitely seems to play into the theory that the game is a continuation, instead of a one-off. It’s still a weird thought to me though, that a side-scrolling series ended with a fighting game. But whatever.

As I mentioned, all three Tournament Fighters games have a different narrative. Each has one thing in common though, the main villain ain’t Shredder.

Karai has taken over the Foot Clan in the SNES version, and Splinter and April have been kidnapped. Of course, it’s up the Turtles to rescue them. Zipping around in the Turtle Blimp (don’t ask), the mean teens hop across NYC battling the Foot Clan.

It’s worth noting that, since this is a pretty restricting story mode, you can only play as the TMNT here. But that’s obviously not so for the arcade mode, which has a story too and centers on a fighting tourney. 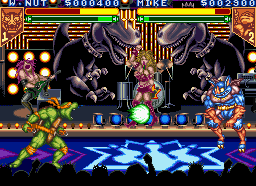 There you can play as almost anyone from the roster, including Wingnut and Armaggon. If you’re a casual fan, you’re probably scratching your head right now, but the inclusion of both of those fighters and the likes of ChromeDome made me giddy at the time. Remember that comic I mentioned? Both Wingnut and Armaggon are directly from that Archie book. And I was a huge fan, so you do the math.

Still, if you’re a TV show watcher only, then you might be wondering why they left so many viable characters off the roster. It’s kind of hard to argue that point, even for me. I mean, where’s Krang (he’s in the Genesis version)?

While you won’t find the level of fighting game depth that you would in something like Street Fighter, TMNT Tournament Fighters doesn’t really disappoint.

The characters here all move around and pull off moves without much difficulty. I noticed a slight issue in getting special moves to work in my recent play through, but I have to admit that might just be me.

Also worth noting is that there are only strong and weak attacks. Unlike in Capcom’s (and pretty much every other) fighting game series, there’s no middle-ground. So you’re either going all out, or just holding your opponent at bay to set up something stronger.

There’s a super move in the arcade mode only as well, controlled by a gage. Not present in the story mode, the gage fills up when you pummel your foe. Once filled, you can unleash a crushing blow. It’s not all that incredible, but it’s neat to have and probably would have made the story mode more fun too. Why it’s not included there is a mystery.

Still, the game has more than enough to keep fans interested. Everything comes together well enough, and Tournament Fighters can shine in spots. If you’re looking for a fighting game, and love the TMNT, there’s little reason to think you won’t enjoy a go-arouind with this one.

Heroes on the half-shell

A decent enough story for a fighting game - 85%

Presentation is mixed, with solid graphics but iffy sound - 77%

Good controls, though special moves can be a little tough - 80%

With some cool (and niche) characters included, adequate controls and a solid presentation, there isn't a lot to dislike. Teenage Mutant Ninja Turtles: Tournament Fighters might not be the greatest one on one battler ever, but it's not bad either and should hit the spot if you're a TMNT fan.

Jason's been knee deep in videogames since he was but a lad. Cutting his teeth on the pixely glory that was the Atari 2600, he's been hack'n'slashing and shoot'em'uping ever since. Mainly an FPS and action guy, Jason enjoys the occasional well crafted title from every genre.
@jason_tas
Previous Diablo 3: A Guide to GR70 and Beyond
Next Ragnarok Thor joins the One:12 Collective