On the heels of an all new Mario adventure, I thought it would be fitting to visit the best two dimensional Mario game of all time. 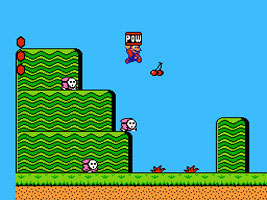 Originally released in 1988 for the NES, this Mario was not even intended to be a Mario game at first. A quick co-opting of character models is responsible for the most different two dimensional Mario game for many years.

Super Mario Bros. 2 introduced different playable characters, a number of different enemies and an all star list of boss characters who never saw the light of day after this specific installment.

As you might know, this game was originally, in Japan, Doki Doki Panic 2. Nintendo thought that the game would suit American audiences better than the “real” Super Mario Bros. 2, and a legend was born.

The premise here isn’t too different from every single other Mario game ever released. Diverging a little from other two dimensions Mario plot, the princess is a playable character. I never actually owned this game on the NES, so I don’t have the instruction book explaining the plot.

What I do know, is that the four playable characters (Mario, Luigi, Toad and Princess) are traveling through a number of worlds fighting dragons and bomb-hurling mice. As it would turn out, the plot isn’t overly important (shock! -ed), given the final development of the narrative.

The ability to play as four characters was a first for this series. This doesn’t really add to the narrative prowess of the game, but really gives the gameplay a boost. Super Mario Bros. 2 is a great break from later Mario games where Bowser becomes the defacto big bad.

People tend to tear this game apart for being a tad different, but that is really where I believe it shines. We get enough of Mario fighting Bowser alone. I like to see Mario & friends team up to fight shyguys, birdos and other monstrocities.

Even if this is a Mario game from the late 1980’s, the gameplay is as tight as platformers that release in 2017.

The basic gameplay premise remains the same as the gameplay in every other two dimensional Mario game. Mario and pals need to move from one end of the level to the other. This ussually means from left to right, but there are occasions where players go to the left and use verticality to traverse the levels. This verticality adds a new dimension to the gameplay (ha!). 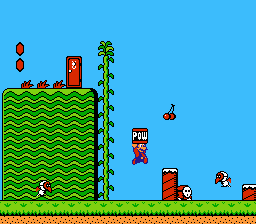 New gameplay mechanics, such as picking up enemies and stacking blocks to jump higher is also a welcome addition. Although these won’t return in future Mario games, they offer a welcome break from the usual.

Every world has its own distinct flavor and challenge too. In the desert world, players must dig through the ground, juggling falling enemies and other hazards. Then in the ice world, all of the surfaces are slippery. In every world, locked doors can only be opened after a player finds and brings a key to the door. This sounds tedious, but it happens rarely enough that I do not mind the challenge.

Back to the varying characters: every character has different attributes and plays very differently. This is where Luigi’s slippery running and high jumping came into existence. Peach’s floating jump also originates here. Different levels are suited to different characters, making it fun to experiment with different characters in different situiations. Players can win lives after levels using coins collected via a roulette system.

I am a huge fan of being able to use different characters depending on how you are feeling as a player. This feature won’t really return until the Wii era, which is just another reason why this classic platformer stands out for me.

This shouldn’t be a surprise, but the presentation in Mario is top notch. Music is memorable, animations are fluid and characters pop. There isn’t a ton to say about the presentation, except that this is an NES game and it looks and sounds great. 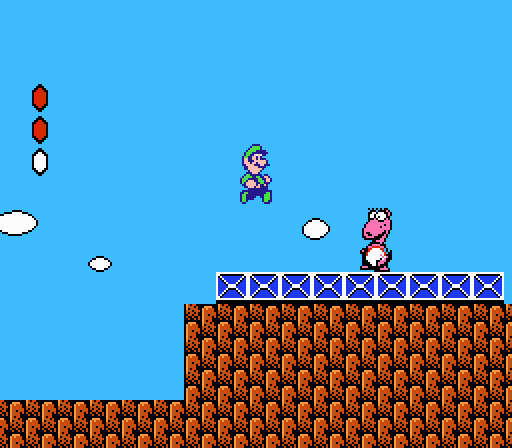 Erich was introduced to gaming by his grandfather before he could walk. Since then, he has grown up loving Nintendo and most games in general. He couples his love of videogames with journalism to cover news, provide reviews and tell it how it is in the gaming world.
Previous Descent Underground will be coming to PS4 and Xbox One
Next Robotech Visual Archive on the way from Udon