It’s kind of rare when you can say that an action figure fills in some gaps in a mythos like Star Wars’. Yet that’s exactly what Sideshow touts with their newest offering.

Now that’s a name I have not heard…

Every Star Wars fan knows Obi-Wan Kenobi. Actually, most non-Star Wars fans probably know him as well. He’s an iconic character whose time in the Clone Wars and whose Original Trilogy life is well documented.

But what about this time in-between? Aside from some talk about a film, there’s been little printed or filmed about Obi-Wan on Tatooine. Then comes this new piece from Sideshow, a part of their Star Wars Mythos line of 12″ figures. 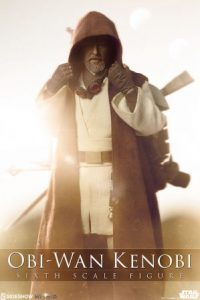 Depicting Ben Kenobi as a solitary nomad wandering the desert wastes of Tatooine, this incredibly detailed and fully poseable sixth scale figure envisions the Jedi master at a point in his life prior to the events in Star Wars: A New Hope, following Revenge of the Sith.
The Mythos Obi-Wan Kenobi figure features a wealth of accessories and subtle details hinting at his action-packed life as a Jedi Knight, from lightsabers to relics of war. Simply overflowing with nods to iconic moments from across Star Wars lore, this is a figure made by fans, for fans.
This week, starwars.com revealed an up-close look at Obi-Wan Kenobi Mythos with an exclusive first look at five new images of the figure.  Now, we’re happy to unveil the full photo gallery – showing all of the details that make him so unique!
See the full photo gallery here.

“We had this unique opportunity, working with Lucasfilm to create a whole new moment in Obi-Wan’s life. There’s a huge responsibility there for us as artists, but also as fellow fans” – Kevin Ellis, Sideshow Project Manager

Looks pretty awesome. And while this new Star Wars collectible isn’t quite out yet, you can RSVP for more info right now. Click this link for the details on that. And if you’re interested in seeing Old Ben in person before you commit to anything, you’ll have that chance as well.

He’ll be present at Sideshow’s booth (#1912) on the show floor at next month’s New York Comic Con.

Jason's been knee deep in videogames since he was but a lad. Cutting his teeth on the pixely glory that was the Atari 2600, he's been hack'n'slashing and shoot'em'uping ever since. Mainly an FPS and action guy, Jason enjoys the occasional well crafted title from every genre.
@jason_tas
Previous The latest Wolfenstein II trailer goes all out with more action than you can shake a grenade at
Next Meet your allies in pair of new Call of Duty: WWII trailers