New Amiibo from the World of Shovel Knight are Coming

Yacht Club and Nintendo dropped a bombshell on Wednesday when they announced that King Knight’s campaign was on the way. 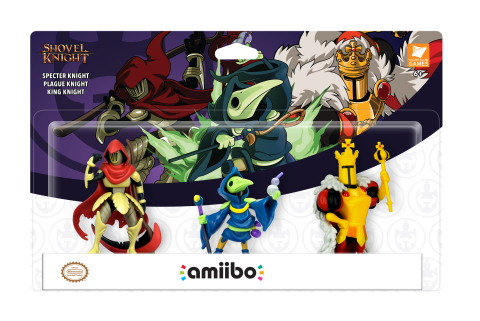 Plague Knight, Spectre Knight and King Knight are all represented, bringing the total count to four from the series.

Shovel Knight was one of those games that really caught me off guard when it first launched. I immediately fell in love with the aesthetic, characters, world and gameplay. The continued support for this game shows how dedicated Yacht Club is to their craft. Now that there is some more official Nintendo merchandise to go with these campaigns, it is going to be hard to resist.

The release date on the amiibo has not yet been announced, but it is probably safe to say that they will be launching with the King Knight campaign in early 2018. The price of the triple pack has not been announced, but if it is following pricing models similar to other amiibo, it will launch at around $35.

As an added bonus, if you want to feel a little uncomfortable, you can see the trailer Nintendo used to announce the amiibo below:

Erich was introduced to gaming by his grandfather before he could walk. Since then, he has grown up loving Nintendo and most games in general. He couples his love of videogames with journalism to cover news, provide reviews and tell it how it is in the gaming world.
Previous It’s Force Friday Star Wars fans, here’s some of what’s out there
Next Dead Rising 4 comes to PS4 with Frank’s Big Package