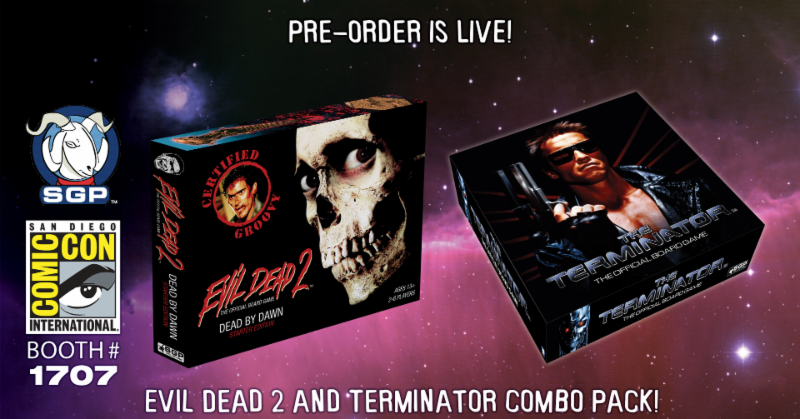 SDCC 2017: Evil Dead and The Howling take over Space Goat. Oh, and Nerd Boss too

Nerd Boss? Nerd Boss. And that other stuff, as mentioned in the headline. Space Goat has a nice selection of stuff set for their booth at SDCC this week.

Space Goat might not be the biggest company out there in comic book land, but they’re making waves. They’ve got massive properties like Evil Dead II and Terminator under their belt, and they’re making good use of them.

A line of Evil Dead II comics are already out there, and a board game for both it and Terminator are on the way. Also just signed last year, horror classic The Howling will be getting a comic as well. So there’s lots to be excited about with the company.

At Comic Con this week, they’ll have representative of all of the above avail be at their booth (#1707), including pre-orders for both board games. Oh, and make sure you check out the Evil Dead coloring book. That’s bound to be all kinds of interesting- and comes with a digital download for a graphic novel. So a little extra value there too.

Then there’s the Nerd Boss stuff, which I find fascinating for some reason. Check out that and everything else in the gallery below.

Jason's been knee deep in videogames since he was but a lad. Cutting his teeth on the pixely glory that was the Atari 2600, he's been hack'n'slashing and shoot'em'uping ever since. Mainly an FPS and action guy, Jason enjoys the occasional well crafted title from every genre.
@jason_tas
Previous SDCC 2017: Image loads up for Comic Con with exclusives and booth happenings
Next Turtle Beach Launches New Recon 150 and XO Three Headsets