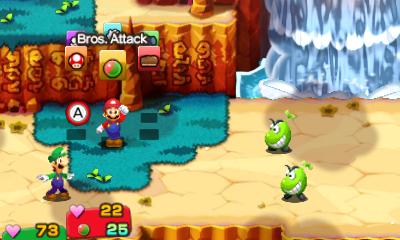 The original handheld Mario and Luigi adventure is getting an overhaul. Nintendo will be porting the game to the 3DS with some new features.

I was one of the few Mario fanboys who skipped out on the original GBA Mario & Luigi: Superstar Sage. Why, I have no idea, but I did. And ever since I’ve been meaning to go back and find a copy. But you know what? Now I don’t have to.

Nintendo sneakily announced, at E3 yesterday, that the game was indeed on the way. It’ll give a while new generation of gamers the chance to play the classic adventure, and then some.

Mario & Luigi: Superstar Saga + Bowser’s Minions contains all the fun gameplay and dialogue of the Game Boy Advance original, as well as an optional Easy mode for younger or more inexperienced players.

Yeah! EASY MODE. No, no, don’t click away yet, there’s more.

The game will also include a new mode that plays up the new portion of its name- Bowser’s Minions. In Minion Quest: The Search for Bowser, players will take on the role of Captain Goomba, and see the story from the eyes of Bowser’s troops.

And to go along with that, Nintendo has also announced that there’ll be a new set of Mario Amiibo. The pair of new figures will include a Goomba and a Koopa Troopa. Additionally, the already existing Boo Amiibo will also be compatible with the game.

Watch for both new Amiibo and Mario & Luigi: Superstar Saga + Bowser’s Minions (for the 3DS) to arrive at retail on October 6th.

Jason's been knee deep in videogames since he was but a lad. Cutting his teeth on the pixely glory that was the Atari 2600, he's been hack'n'slashing and shoot'em'uping ever since. Mainly an FPS and action guy, Jason enjoys the occasional well crafted title from every genre.
@jason_tas
Previous Conan Exiles lays siege to Xbox One this August
Next Top 5 Skyrim E3 appearances