If you missed our coverage of Vol. 1, you can find that here.

Where Is Hal Jordan 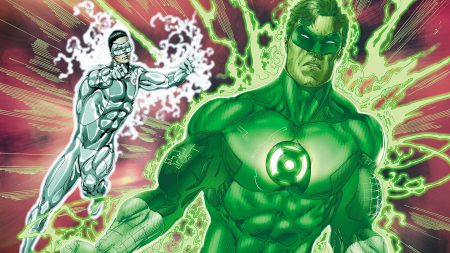 What do you do, when the opening words of your superhero comic book include “Error” and “Deceased”? That was my first thought when I opened up Hal Jordan And The Green Lantern Corps Vol 2. Vol 1 left nothing to the imagination as to what sort of condition our hero was in.

Hal and Sinestro had given everything in their battle. So much that Hal had become the living embodiment of Will, and the planet WarWorld exploded. So now we have the remaining Green Lanterns and the Sinestro Corps both in action, though with their flagbearer personas missing in action. The leaders of the Sinestro Corps can believe that Sinestro is gone. While the rest of the Green Lanterns, knowing just what flavor is personality Hal Jordan has, finds the idea of Hal being dead unthinkable.

More Than One Corps

I had to re-trace these few pages myself to be sure I was reading things correctly. The Green Lanterns and the Sinestro Corps hanging out together on Mogo, the living planet. Sinestro’s rule really opened the Corps’ eyes of what is going on. It took the cooperative action of rescuing the inhabitants of WarWorld to bring the two Corps together. Some Lanterns are quicker to accept the change than others. It takes Guy Gardner to convince John Stewart that Soranik and the Yellow Lanterns are here to cooperate with them.

From there we see the Green Lanterns rush to the aid of Xudar, Tomar-Tu’s homeworld. Xudar is being attacked by a  giant starfish creature, dropping mind-altering stars on the population. Soranik defies John’s orders to stay put, and the Yellow come in as reinforcements for the Green Lanterns.

Unfortunately the Corps learn too late, that the attack by Starro was merely bait. The teams were lured in and trapped by none other than Brainiac version 2.0. This puts a significant spin on what is going on, as Brainiac is typically a more intelligent and grander scheming villain. He comments about the species being for for the ‘grand collectors’ aquisitions.

Ganthet and Sayd have placed themselves in exile on a small rock in the middle of nowhere named Nok. (While there is no mention of such things here, Nok is the home planet of yet another Lantern branch: the Indigo Tribe.)

Hal’s ring, or rather, what remains of Hal has found his way to the last of the original Guardians of the Universe. While they are indeed mighty, they will require the help of another to revive Hal from his latest predicament: Kyle Rayner, the White Lantern. Hal’s in a bit of a Green Lantern limbo at the moment, and it will take incredible power if he is to regain his original form.

The three muster their abilities, and together bring Hal back from where he disappeared. Hal was able to speak with Green Lanterns that have come before, so he was able to gain some insight into feelings people had, that never had a chance to explain.

Not A Bright Moment 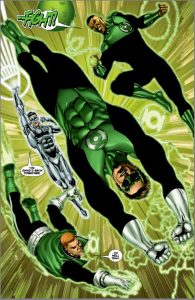 We see Brainiac in a room amassed with dozens of collector’s jars, just like the ones he imprisoned Starro and the Lanterns in. The grand collector mentioned by Brainiac is Larfleeze. The Orange Lantern. Insanely and obsessively driven to possess everything.
Larfleeze found a damaged Brainiac model among his hoard intakings, and was able to possess the android with his light of avarice, allowing the collector to work for the Lantern. Now, together with the Lantern’s minions, Brainiac and his technology are proving incredibly satisfying to Larfleeze’s obsessions.

Thankfully however, John Stewart knows how Larfleeze thinks, and comes up with a way to break out of their glass cage. John, Guy, Kilowog and the rest of the Green Lanterns pick a fight with their new allies. What at first must seem like a double-cross, ends up being an explosion that even Larfleeze cannot contain. The glass cage shatters, and the room is flooded with Lanterns. Larfleeze and Brainiac are immediately outnumbered.

Hal returns to Mogo, only to find the place deserted. It takes some time to learn that they have all gone into the Vega system. Reuniting the missing Lanterns with their Corps is the final nail in the coffin for the Orange Lantern’s collections. His inventory is depleted, leaving him with only his avatars. Lucky for him, he is able to gain a soul or two during all this calamity.

The shrunken civilization of Xudar is able to be returned safely, while the Green and Yellow Lanterns reach an agreement to work together in the future.

Jumping decades into the future, we see that some more Xudarians were selected to defend the universe as Green Lanterns.

Seeing the power of the combined Lanterns, as well as the strength of a few key individuals make Hal Jordan and the Green Lantern Corps Vol 2 an incredible read. Something for everyone, without a doubt. Even seeing Rayner’s White Lantern getting on the action was an enjoyable nod to his Green Lantern history.

Regardless of which is your favorite Lantern, you're treated to a bevy of them here. When I picked up my copy, I had no idea the colors or adventures I would see. Pick up a copy. There's a page with 5 heavy-hitters reuniting like a Hall of Fame induction. It's worth a look, i swear!

A fan of media on multiple platforms, I am always watching or playing something! Who knows what I will be on to next?
@mackeyp42
Previous SDCC 2017: Batman 89 Mez-itz coming from Mezco Toyz
Next CD Projekt Red releases statement on ransomed design documents situation