Shazam has had something of an odd history in comics. Originally called Captain Marvel, the hero was brought into DC decades ago from Fawcett Comics. Then, more recently, he underwent the name change and became ‘Shazam’. That used to be the name of a wizard in the series, and now it’s his. Interesting what copyright issues will do. 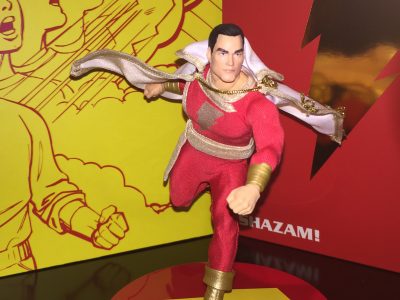 Not that Marvel Comics (and their version of Captain Marvel) was an issue anymore, since the publisher and DC came to an agreement over the name. The good Captain’s book was called Shazam, while he himself retained the original title. Still though, DC apparently thought it was a better move to have the hero’s name match the book. And so here we are.

If somehow you’re not familiar with Capta… Shazam, he’s basically a magic-powered version of Superman. Though I should add that he doesn’t have quite the impressive array of abilities that the Man of Steel possesses.

Shazam can fly, has super-strength, and near-invulnerability. He can also call on magic lightning bolts. Those can be used defensively, but also serve to transform him into his civilian guise of Billy Batson. Oh, and Billy is a little kid… which means Shazam is actually a little kid. It’s complicated.

Now that we have the history out of the way, let’s talk toy.

Shazam is the latest in the One:12 line from Mezco, and he’s more or less in keeping with the incredible quality that the series showcases. I think it’s more that fair to say that you’d be hard-pressed to find a better made and realized series of 6″ figures out there right now. Or ones that have the detailing and scope that the One:12 has for that matter.

But while there is a lot of good with Shazam, there’s actually a little iffy-ness to this one too. That’s something that I’ve yet to encounter with a One:12 too. So while it’s not a figure-killer of a downside, it’s maybe a little more pronounced for me than it might normally be. 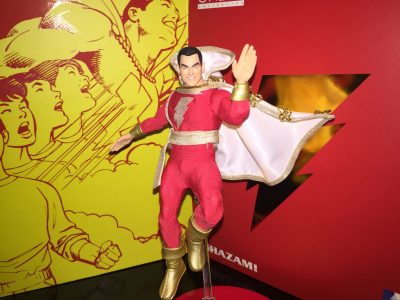 But let’s start with the good news: This figure basically still kicks butt.

Popping open the collector-friendly packaging will treat you to maybe the best figure of Shazam ever. He has all the One:12 poseability that you’d expect, which means that you can use those 32 points of articulation to make some epic displays.

Billy here also comes packed with the usual assortment of extra hands and “portraits” (extra heads). In the box are outstretched hands for flying (or karate-chopping I guess), a pair of fists for smashing stuff, and a pair of grasping hands.

He’s also got three possible heads, with standard, smiling (fits for the character), and shouting ones. The shouting one in particular is awesome, since it works with another accessory to recreate the moment Shazam shouts… Shazam. 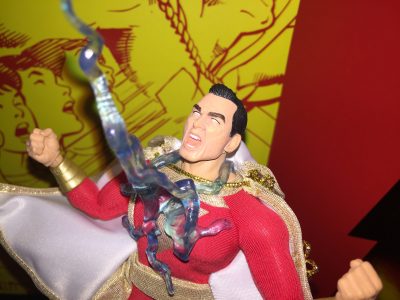 And speaking of those accessories, there are some very cool ones

Mezco doesn’t skimp on the accessories when it comes to the One:12 Collective, and that’s doubly true with Shazam. I mentioned above that you can make the ‘Shazam’ pose, and that’s possible through the use of the extra head and a cool lightning bolt that attaches to Shazam’s chest. Needless to say, since you can see it in the pics, it looks awesome.

Also included is a poseable cape. There’s a wire going around its edge, so you can make some really neat flying or movement poses. I’ve seen this plenty of times before with other toys, but Shazam’s looks particularly great. Might be the shortness of it, since it’s not supposed to be the longest of capes. Whatever it is, it works.

Past that, you’ll find not one, but two villains packed-in. Well… one. And a piece of another. Shazam comes with Mr. Mind, who is unposeable, but looks great with a terrific sculpt. He’s a classic villain of the character who’s basically a super-intelligent, alien caterpillar. As you can imagine, he’s kinda niche.

And the second one is the robotic head of Mister (yes, another mister) Atom. A big bot, Mister Atom hasn’t been seen in comics in ages, but is particularly neat here. His head has a big fist indent in the side, from where Cap smashed him a good one, and wires dangling from his neck. You an actually make Shazam hold him by those, which makes for a really nice pose. 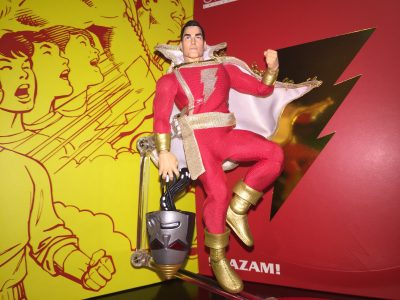 So, what’s not great then?

I know I sort of gushed about this one, and yet you had to be thinking that there was a shoe set to drop somewhere. Well, here it is. This isn’t the biggest of issues, but part of his outfit just doesn’t look right. And I’m not used to seeing this from a One:12 entry. What’s wrong with it? The costume is a little off, for lack of a better word. Well, mine is anyway.

And it’s not completely off either, but the belt sash and the pants are somewhat ill-fitting. The sash, though you can’t honestly tell from most of the pics, is too high up on the waist. It’s stitched on too, so it’s not like you can just loosen it and lower it down. As a result, it looks odd and you have to work at it a bit to get poses to look right. Not the end of the world, but a little annoying. 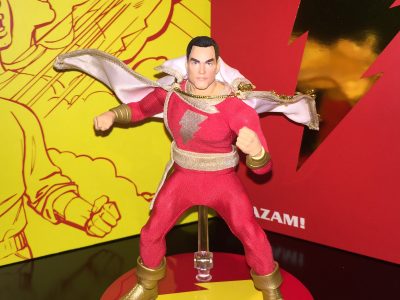 As for the pants, they’re too saggy. Instead of the fitted look that One:12 figures seem to usually enjoy, Shazam’s pants look really saggy, like he’s wearing baggy, uh, tights. Or something. Fortunately, this too isn’t a deal breaker, but much like with the sash, it can take a little work to get poses to look right because of it.

While it does have it's issues with the fit of the pants, and the odd sash placement, Shazam manages to still be awesome. The accessories are excellent, and I love the addition of secondary characters (or parts of)! As you can see too, the poses you can achieve are dynamite. If you're a Captain Marvel fan (ahem) this one's kind of a can't miss.

Jason's been knee deep in videogames since he was but a lad. Cutting his teeth on the pixely glory that was the Atari 2600, he's been hack'n'slashing and shoot'em'uping ever since. Mainly an FPS and action guy, Jason enjoys the occasional well crafted title from every genre.
@jason_tas
Previous Xbox Game Pass launches June 1st with over 100 games for $10 a month
Next Arms Hands-on: High-marks for the Global Testpunch