Home / industry / El Shaddai To Get Sequel in The Lost Child

El Shaddai To Get Sequel in The Lost Child

El Shaddai: Ascension of the Metatron, by Ignition Tokyo, to recieve a sequel of sorts, in The Lost Child. 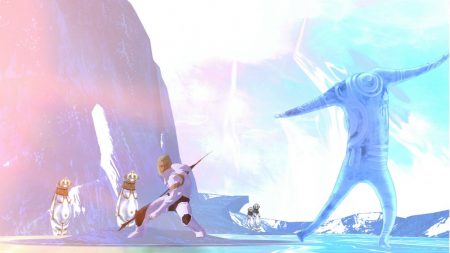 The Lost Child takes place in the same world as El Shaddai, and will feature the return of the archangel Lucifel. Lucifel was voiced by Harry Potter actor Jason Isaacs in the English version of El Shaddai. Development on the spiritual sequel is reportedly 90 percent complete.

“Magazine writer Hayato Ibuki was chasing the story of the suicide [of] a person who jumped in front of a train in Shinjuku Station. In the  pursuit, he falls onto the platform as if he was pushed by a mysterious black shadow. A mysterious, beautiful woman named Barcia saves him by the skin of his teeth. Barcia then hands him a suitcase. It was a Pandora’s Box that should not have been be opened. Inside was the “Demon Gun Gangour,” a tool that can capture and enslave demons and fallen angels. Using this ability, Hayato successfully took on his own demon subordinates. Together with a woman named Rua, who calls herself an angel, Hayato will pursue the mysteries that occur in various places and find the beautiful woman who gave him the suitcase.”

A fan of media on multiple platforms, I am always watching or playing something! Who knows what I will be on to next?
@mackeyp42
Previous Injustice 2 (Xbox One) Snapshot Review
Next McFarlane Toys picks up Star Trek license, Discovery and classic series’ first up