Summer is almost upon us, and Udon has another round of swimsuit-clad fighting game women in store for fans. The Street Fighter & Friends Swimsuit Special is on the way.

The World Warriors and so much more, wearing so much less

Ah pinups. A classic art form that doesn’t seem to lose appeal… well pretty much ever. On top of that is publisher Udon, the masters of all things Capcom when it comes to comic books. Once again, the famed fighting game characters of the Capcom universe will be appearing in their bathing attire, though this time they’ll be joined by some friends.

Udon says that the Street Fighters will be teamed with “their fighting game friends from Darkstalkers, Rival Schools, and Final Fight!” And that means that not only will you see Chun-Li and Cammy in these pages, but also also the likes of “Morrigan, Tiffany, Poison and many more fan-favorite fighters!” 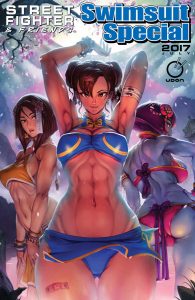 As usual too with Udon, there’ll be a nice slate of variant covers available. Artists Ecchi-Star, Aki Li, and Ryan Kinnaird will all have covers for themselves, and there’ll also be a blank edition, as well as retailer exclusive cover from Joe Vriens. That one sounds particularly neat as it’ll be starring Darkstalkers’ Morrigan, and will be patterned after “a classic horror image from the 1960s.”

And the interior talent? There’s plenty on tap.

Jason's been knee deep in videogames since he was but a lad. Cutting his teeth on the pixely glory that was the Atari 2600, he's been hack'n'slashing and shoot'em'uping ever since. Mainly an FPS and action guy, Jason enjoys the occasional well crafted title from every genre.
@jason_tas
Previous Tokyo 42 Release Date Announced
Next Knightmare Batman is now up for pre-order, exclusively from Mezco Toyz