Home / Action Figures and Toys / Knightmare Batman is now up for pre-order, exclusively from Mezco Toyz

Knightmare Batman is now up for pre-order, exclusively from Mezco Toyz

You might remember seeing Knightmare Batman here several times before. We’ve covered him both at cons, and in press releases from Mezco, and he’s looked pretty darn cool all along. Yes, BvS had its issues  as a film, and throngs of a little t0o vocal detractors, but it also had some amazingly cool elements. And the nightmare that Bruce Wayne had (if it actually was a nightmare) was definitely one of them.

In it, Wayne saw a future Earth (Gotham City in particular) that was conquered. Darkseid’s parademons soared across the skies and human commandos served an evil Superman’s justice to all those on the ground. It immediately reminded me of the Injustice seres of fighting games. Though the scene was pretty different than what played out there, the main theme was the same – a corrupted Superman.

This figure of Batman is crafted to meet his on-screen persona in those scenes perfectly. Decked out in a heavy coat, and armed with a assault rifle, he’s not playing around. Neither is Mezco, who’s added the usual One:12 Collection assortment of accessories and alt-heads.

Scroll down for the full list of what’s in the box, and then get to clicking. Knightmare Batman is available as a Mezco exclusive, and can only be ordered from the company’s online store, here. 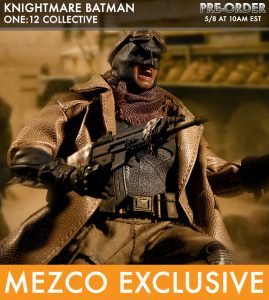 Each One:12 Collective Knightmare Batman figure is packaged in a deluxe, collector friendly box, designed with collectors in mind there are no twist ties for easy in and out of package display.

Jason's been knee deep in videogames since he was but a lad. Cutting his teeth on the pixely glory that was the Atari 2600, he's been hack'n'slashing and shoot'em'uping ever since. Mainly an FPS and action guy, Jason enjoys the occasional well crafted title from every genre.
@jason_tas
Previous Street Fighter & Friends swimsuit special heating up racks this Summer
Next Series 5 of DST’s animated Marvel Minimates made official