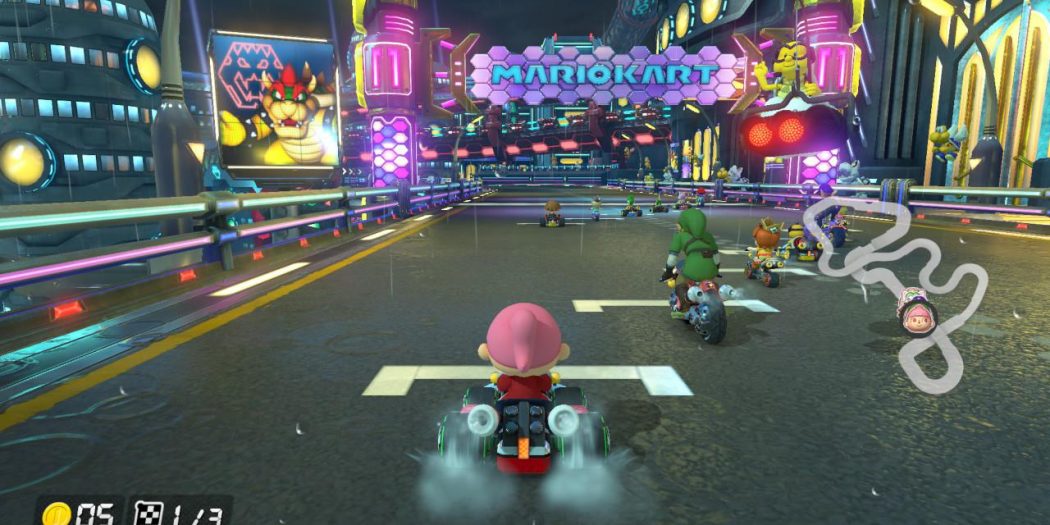 Mario Kart 8: Deluxe doesn’t just bring back the solid Wii U entry: it brings back the once great Battle Mode to new heights.  Local and Online multiplayer receive a kick-start, turbo boost, and first-place finishing trophy all in one.

But it’s not the only reason to hit the tracks one more time- especially if you skipped on Mario Kart 8 and the Wii U altogether. 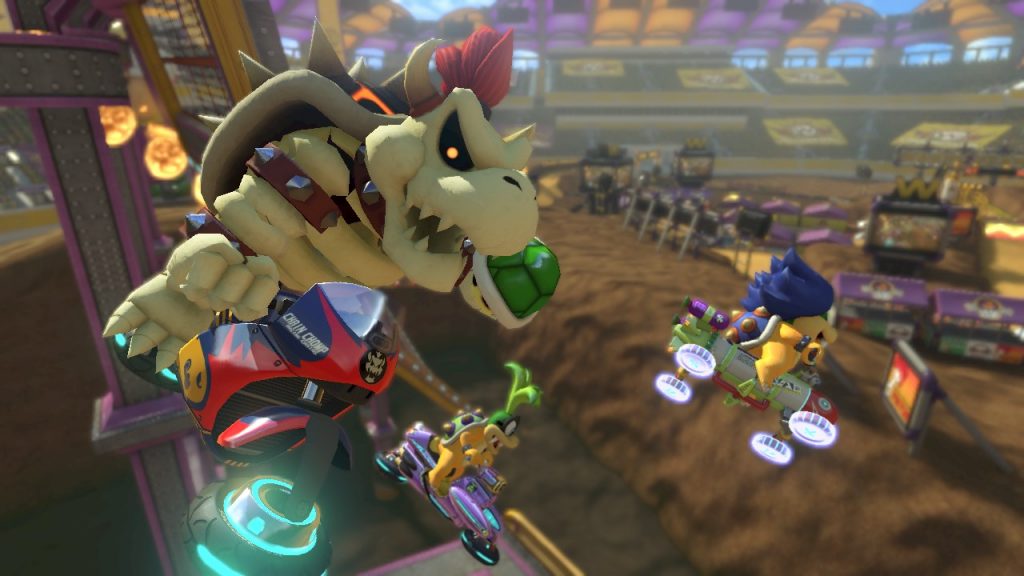 Mario Kart 8: Deluxe delivers the same crisp, colorful graphics, the same rocking, jazzed out soundtrack, and the same tight, joyful mechanics as its original- but now four players can enjoy 1080p on the TV. Or they can go head-to-head in Tabletop mode for a portable party.  Or every player can bring their own Switch and play in Wireless- or up to 12-player LAN.  The portability of the Switch (and the Switch itself) is given new life, while giving Mario Kart 8: Deluxe that same boost.  It’s never been easier to get a game of Mario Kart going where there wasn’t Mario Kart before.

Mario Kart 8’s eight cups return, and are joined by the four excellent DLC additions, for a total of 48 courses (none of which will be new to players who were there on Wii U, and shelled out for the extras).  Each one looks just a little better than you remember it, but don’t offer sufficient reason to come back on their own.  Each track is bursting with color and personality, but its color and personality many of us have already been enjoying for the last couple of years. 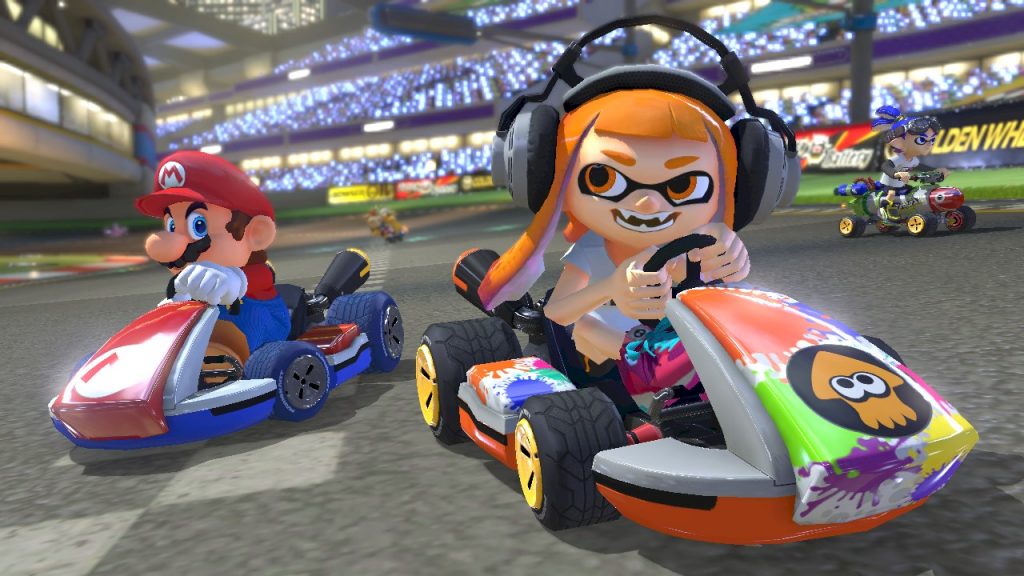 But it’s the brand new bullet points that’ll bring you back.  The minor additions are comprehensive.  Five new characters, including King Boo, Dry Bones, and Bowser Jr. (the last an especially bewildering no-show from Mario Kart 8 original) and cameos Inkling Girl and Inkling Boy (both with three color variations) join the race, and with the included DLC characters bring the roster to a healthy 42. Three new karts, including two inspired by Splatoon, join the line-up. Two new items (both familiar: the item-stealing Boo and the foe-hopping Feather) also make welcome additions to the previous arsenal.  Smart Steering will keep the youth on the road, or you, if 200 cc is too much of a struggle. Tournament options will even disallow it, if you want to see your friends fly.

Gameplay adjustments make changes to fire-hopping (a technique wherein players keep speed after turbo-boosting out of a drift) and add another level of turbo boost for longer drifts.  If your tires spit pink fire, you’ll be rewarded with practically another entire second of boost.  Keeping a drift for that long already feels great, but the extra visual punch and the significant payoff make it only more satisfying.

Players can also hold onto two items at once now, keeping that Super Horn in reserve for the eventual (and inevitable) Blue Shell.  But then again, unlike Double Dash which inspired it, players can’t switch items, so it’s more likely that Coin will be in reserve while you’re holding your Super Horn.

The King is Back, Baby 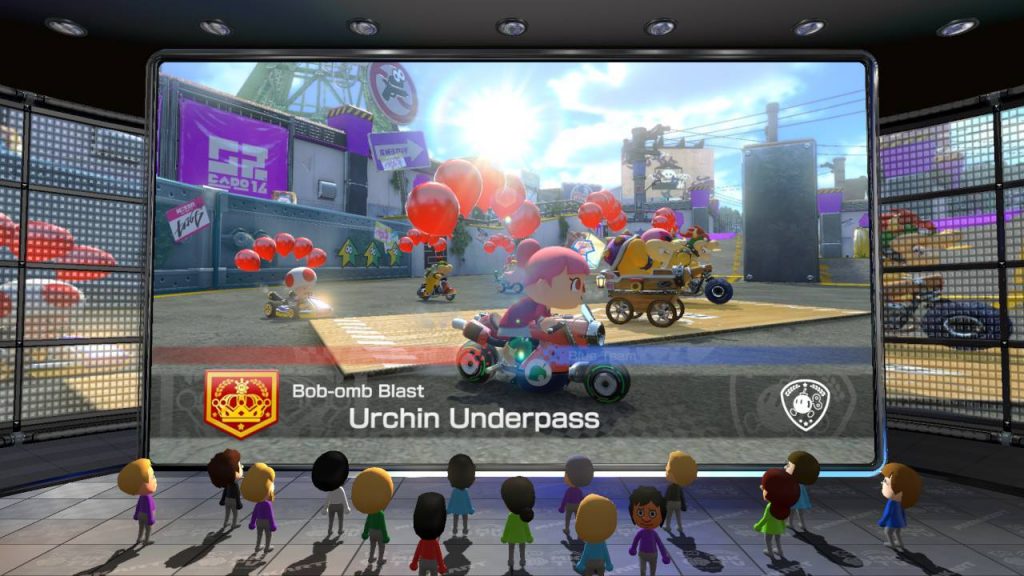 More important than all of those additions, however, is the return of the king.  Mario Kart 8: Deluxe brings back Battle Mode in a big way.  The dull loops taken from race courses in Mario Kart 8 are replaced by proper courses.  All eight of them are enjoyable in their own was, whether the returning GCN Luigi’s Mansion or 3DS’s Wuhu Town, or the new additions in Lunar Colony or cameo Urchin Underpass (an accurate recreation of the Splatoon stage, re-imagined for karts instead of squids).

It’s the five modes that really let those stages flourish.  Most of them are familiar: Balloon Battle is its modern incarnation, where players earn points for popping balloons, and lose them if knocked-out (despite returning for a second chance immediately after).  Shine Thief requires players to hold onto the Shine Sprite for 20 seconds, and Coin Runners tasks players with picking up (and holding onto) as many coins as they can.

Blast and Chased to New Heights 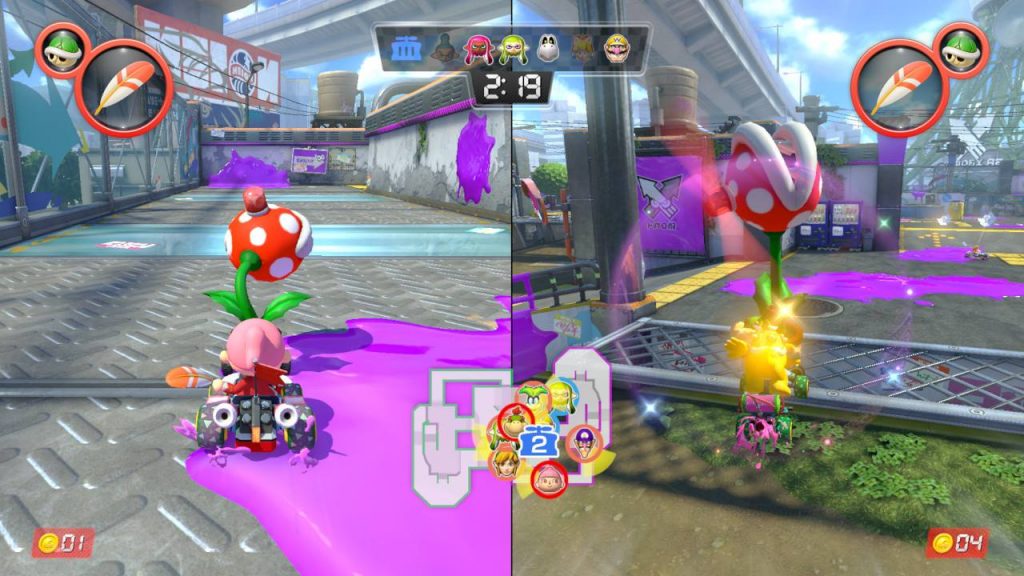 The last two are the standouts, though: Bob-omb Blast returns for the first time since Double Dash, giving players up to ten Bob-ombs at a time for an explosive battle (though not to the death- like Balloon Battle, this one’s for points).  It’s changed somewhat from how it was originally- ten bombs instead of eight is hardly noticeable, but bomb arcs are negligible if you don’t load them, making long-shots a more demanding state of affairs (and you can make some very long shots).  Leaving bombs behind you isn’t as reliable (or at least as immediately explosive) as before either, but it gets the job done.

Lastly, the brand new Renegade Roundup is a fantastic adaptation of cops vs. robbers, which tasks one team of players with catching the other- a duty made more difficult by the ability for the robbers to break out all of their allies in one clutch moment.  The three minute rounds are teeth-bitingly intense (especially when it does come down to the nail, and you’re the last free renegade trying to stay alive for a last thirty seconds, or risk everything to bust out your crew), even if some stages make things a little too difficult for the fuzz. Nonetheless, both sides are fun, and even the bots (which can be turned on or off in Tournament Mode, where you’ll have to go if you don’t want to switch off between battle types) can come out of nowhere to save the day.

It’s unfortunate that when joining a match, you may have to spectate the back-end of a game in progress.  The ability to replace bots and get the game night going would have been greatly appreciated.  We faced several drops as well during online play, an annoyance that will hopefully stabilize in the future (especially because a disconnect results in a loss, and hurts your ranking or tournament contribution).

Mario Kart 8: Deluxe is the ultimate Mario Kart experience.  Whether or not you caught the original on Wii U, there’s plenty of new features to change up the versus experience, and even more new content if you missed the DLC.  The new and improved Battle Modes hearken back to the greats while introducing a head-lining new way to play.  And of course everything that was there before- beautiful color, race-ready mechanics, and the best soundtrack the series has ever had- is back and better than ever. All of this is only complimented by the Switch’s social element.  It’s time to take the road on the road.

Mario Kart has never been so jazzy- or so brilliantly orchestrated. - 100%

Feature-complete Mario Kart 8: Deluxe is bolstered by new additions and minor changes, and elevates Mario Kart 8, and the franchise, to new heights on Nintendo Switch.

Brutal Gamer's Nintendo Editor began his gaming life a little late- at five years old. But he's made up for it in the two decades since, gaming and writing about gaming with the same passion, fervor, and unrelenting love as his five-year old self.
Previous Mayhem Clash Comes to Destiny’s Iron Banner Next Week
Next The Visitor: How And Why He Stayed #3 (comic) Review