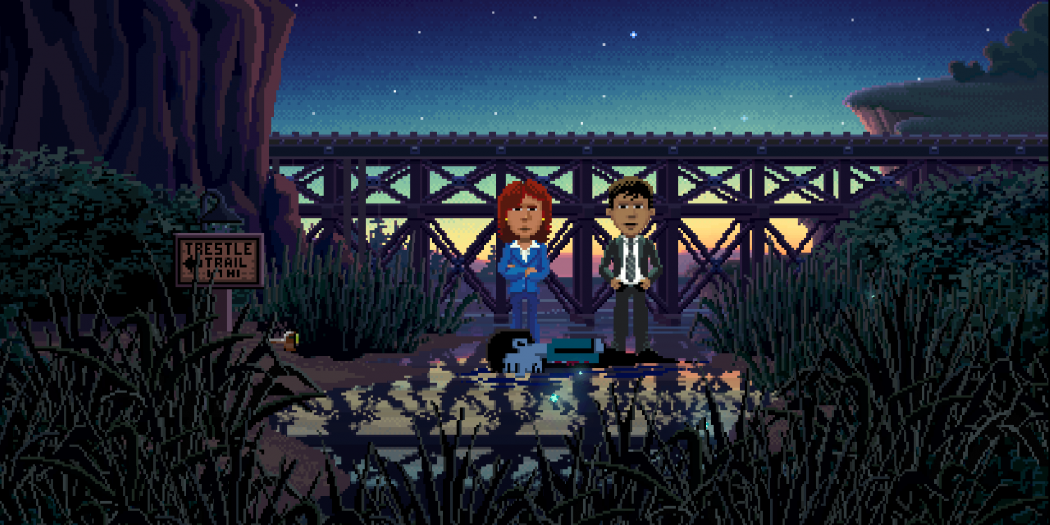 After spending about 11 hours in Thimbleweed Park I can say that genre-vets Ron Gilbert and Gary Winnick have hit the nail that is the point-and-click adventure genre right on the head once again. Full of witty humor, strange characters, and clever puzzles, Thimbleweed Park is going to thrill any fan of 80’s/90’s LucasArts games.

Thimbleweed Park begins with a body in a river, a devious murder to be sure, but who in town could be capable of such a gruesome act? Well, as agents Angela Ray and Antonio Reyes, that’s your job to find out. Other playable characters in the game include a crass, angry-at-the-world clown, an aspiring game developer (who wants to make games for “MucasFlem Games”), and the ghost of the murder victim. 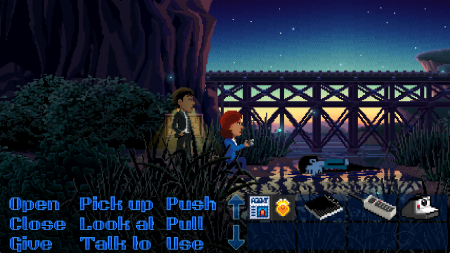 Thimbleweed park is reminiscent of an X-Files episode, with one of the main characters, Angela Ray, resembling almost a direct visual reference to Dana Scully, as well as the strange, Twin Peaks style setting (which I will get to here in a minute). Everything that is old truly feels new again.

Next I want to talk about the music, because oh man, the music. I’m unashamed at the fact that I’m listening to the OST right now, as I write this review. Most of the songs are very bassy, that is, not “Skrillex” type of bass, more like a swing dancing type of bass; combine this of course with somewhat ominous 80’s synth-pop, and you have a soundtrack that is likely to stay in memory for a very long time. One especially memorable tune is called No Quarter, but if you look it up, make sure to look for it without lyrics….trust me, it’s better that way. 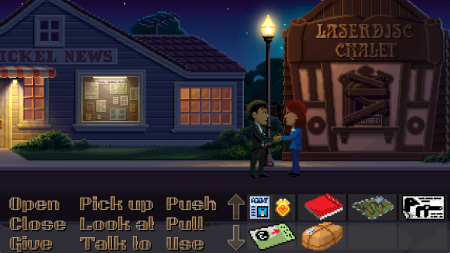 Everything looks suitably “retro”. Heavily pixelated characters populate Thimbleweed Park, but never does it feel lifeless…well, besides the areas that are designed to feel that way. Every location feels interesting or creepy in some way, making it a joy to click around just to see what you can find. However, while the things the characters say in reference to certain objects or actions are often humorous, most background items are static and can’t be interacted with.

Thimbleweed Park has a colorful cast of around 23 characters, all of whom have some important connection to the story. Personal favorites include Sandy and Dave (yes, the two main characters from Maniac Mansion) who own the town diner, and Willie T. Wino, the crazy drunken hobo, and resident beggar. Every single inhabitant of Thimbleweed Park has some strange quirk and at least a somewhat plausible motive, which makes it much harder to pinpoint the killer than you might think.

As much as I love this game, I have to admit it isn’t all sunshine and roses

There are definitely issues with Thimbleweed Park. First off, the big one, the interaction menu is clunky, not necessarily difficult to use, but I did find it obnoxious after a while. Available interactions include: Open, Pick up, Push, Close, Look at, Pull, Give, Talk to, and Use. I understand that they wanted things to feel like Monkey Island and, to a greater extent, Day of the Tentacle, but I don’t think the clunkiness of the menu system was needed, it doesn’t really enhance the game any, but if using an outdated system of control is nostalgic to you, then godspeed. 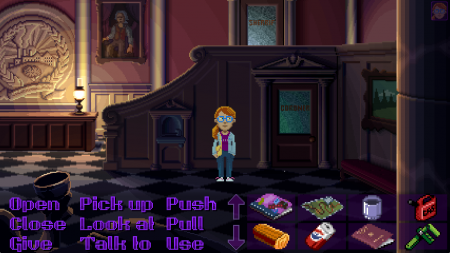 I think a way things could have been simplified is including “Open and Close” in one option, doing the same with “Push” and “Pull” could have decluttered the menu bar a little bit, and then combining “Look at”, “Talk to”, “Pick up”, and “Give” into one “Use” option, would have things much more bearable. However, to invalidate my own argument, there is in fact the ability to right-click- on most things, and it will do the most obvious interaction, but it doesn’t always work; for instance, when using an item from your inventory on something, or giving an object to someone.

My other issue is fairly minor, mostly because it is rectified, in a way, but I’ll get to that bit in a minute.

Point-and-click game logic abounds in Thimbleweed Park (if you can believe it, or not), which makes me giggle like a schoolgirl, because that’s just the kind of thing I like, and I’m used to. For instance, during on section of the game, agent Ray gets trapped in a sewer, however there is a payphone in one of the maintenance rooms, which you have access to; the issue is that she doesn’t have a quarter with which to make a call.

Maybe this is one of the more obvious puzzles,but they do get more difficult. With Ray in the sewer, as Antonio, you have to find a quarter and drop it down the drain, allowing Ray to make a call to the “Sheriff-a-reno” and escape. To some players, who aren’t used to finding solutions to problems in strange mid-nineties adventure games, some of these puzzles may strike a nerve of aberrance. However, like I said, there is a solution. 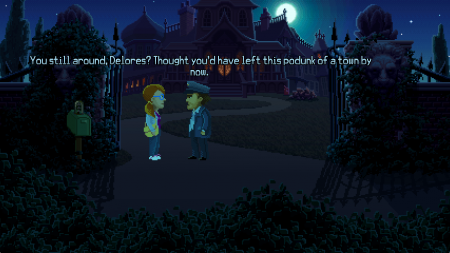 There are two modes of gameplay: Casual, and Hard. Unlike most of the unforgiving adventure games of the 90’s, Thimbleweed Park dances around the issue of deaths and Game Over screens without you ever having to actually encounter one; even in Hard mode. Casual mode seems to be a more stripped away version, with many sections altered, and a few removed altogether. Hard mode includes the full versions of all puzzles, and it makes the game about another hour longer.

The truth is out there

In the end, I think the game is an excellent callback to one of my favorite genres, and if you enjoy this type of adventure, you will undoubtedly find a modern classic hiding Thimbleweed Park.