I don’t believe what I’m about to say but let’s just get it over with: I’m not excited for more Neon Genesis Evangelion parody mangas.

The Problem With Parodies

Neon Genesis Evangelion: Legend of the Piko Piko Middle School Students is as stupid as it sounds – but that’s not necessarily a bad thing. I’ve been saying this a lot, but Eva is such a huge franchise that you can literally produce dickbutt (that’s a meme) animations of them and it will still earn a moderate amount of money in the market. That’s saying something, as getting a show greenlit is already hard as it is.

Here’s how I imagine pitching sessions for Neon Genesis Evangelion to be:

Author: Hello Mr. Anno, I would like to make a spin-off parody of Eva. It has –
Hideaki Anno: (Interrupting) Does it have Gendou being a dick to Shinji?
Author: Well, ye –
Hideaki Anno: APPROVED.
Author: What?
Shinji: What?
Unit-01: What?

Of course, this may more or less be inaccurate, but we’ve been getting so many parodies that it’s almost as if we’re in a parody ourselves.

Piko-Piko is (I can’t get over how funny the title is) basically still Neon Genesis Evangelion. But instead of fighting robots, we’re going to be focusing on the Children (remember, they’re called ‘children’ in the original series) training to be pilots using video games.

Is it as stupid as it sounds? Yes. Is it good? Good enough to be a ‘guilty pleasure’ of sorts. 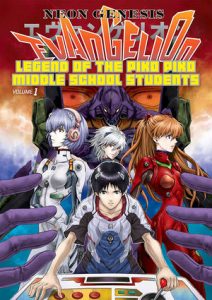 See, I’ve been reviewing the Shinji Ikari Raising Project and I think that series is great. The price of that however, is that I don’t find Piko-Piko to be surprising anymore. Of course, the premise is somewhat interesting but I just don’t find it as funny as the other parodies. Of course, it may be unfair to compare it to another Eva parody especially if they focus on different things. Though that’s kind of the problem: they don’t.

Gendou is still a dick to Shinji, Rei and Asuka are still fighting over Shinji, and Kaworu is still… Kaworu. Of course, I laughed out loud when I saw that everyone was still wearing their usual Plugsuits. Well, with the exception of Shinji who was wearing what is essentially a Plugsuit T-Shirt.

Plugsuits are made out of a specialized material and is a highly high-tech piece of equipment. Each Plugsuit is custom made for its owner and each one has life monitoring devices as well as failsafe to keep the pilot safe.  Of course, each Plugsuit is also built to help the pilots synchronize with their respective Eva units, and Shinji Sue over here has a T-Shirt. That made me laugh out loud, but unfortunately that was the only refreshingly funny thing Piko Piko had to offer me.

While everything that I have said about Piko Piko may sound bad, it’s really not. It’s a great book with great ideas, but those ideas aren’t really unique. I could give Piko Piko a higher score, but I have to deduct some points for lack of originality.

My favorite aspect about it however, is the art. That I won’t disparage. Everything looks great and Piko Piko series artist Yukito is flat out amazing. Truly, I have never seen Evangelion so beautiful with regards to original character designs. I guess you can say that Piko Piko is more ‘millennial’ compared to the original work and even the Rebuild movies.

One of my only gripes about the series is how everything is sometimes too chaotic for the readers comfort. It’s nothing new with Japanese manga however.

I think Piko Piko is good but it could be better. This might be the only parody series that I have yet to read for Eva so the next volumes provide a form of excitement in me that I have not felt in a long time. Despite everything that I said about Piko Piko, I'm still an Eva fan by heart I can't wait to read more. So should you get Piko Piko? Yes, especially if you're a fan of the series. You can't get enough Eva - is what I'm always saying and that's true even for Piko.

Benj likes video games, neckties and scotch. His favorite games include Resident Evil 2 and Final Fantasy VIII. You may contact him at [email protected]
@ggburroughs
Previous The Nintendo Switch Is the Second Best Selling console since 1995
Next IDW to publish classic Star Wars newspaper strips