Lil Tanks is loaded with charm, but it’s not quite enough to hold your attention.

Lil Tanks is a top-down style shooter that one can embrace when needing a small but clean blast-fest of a challenge. However, it has its limitations and doesn’t stand out too much from the crowd.

Lil Tanks is about humanity’s last weapon against aliens looking for a world to conquer. Its story plays out in adorable little cutscenes reminiscent of games gone-by with various commanders pushing the story along with intel that leads you to alien outposts and bases.

One thing that I thought was quite funny is how they used font as a comedic element. All your tanks can say is “BEEP” and so BEEP was considered shouting and beep is being quiet. Needless to say this isn’t some plot-twisting, deep story here – it’s a very simple story for a very simple game. 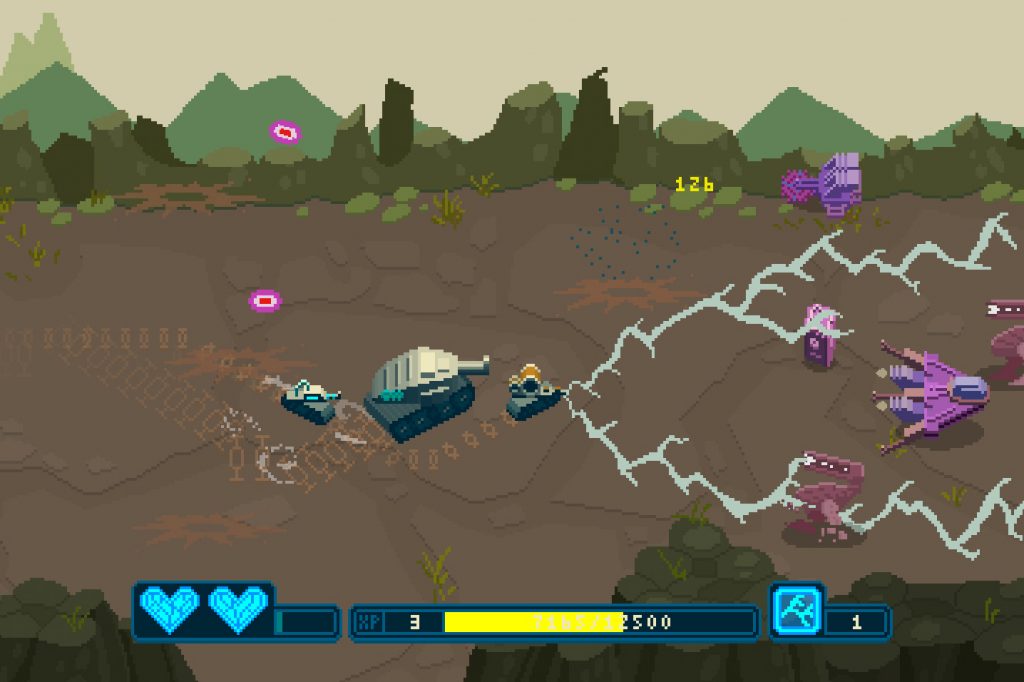 Lil Tanks has a 2 player co-op mode (which unfortunately I couldn’t check cause I’m a loner 🙁 but can assume it’d be fun nonetheless for a quick playthrough or so) and a single player campaign. You unlock hardcore modes when you finish levels for additional difficulty and can play endless mode and boss fight mode.

It runs levels like most games, but there’s no checkpoints in them. You die, you start from the beginning of the level. At the end of every level, there’s a boss with different attack patterns and unique features. They range from something looking like an epileptic fit on wheels, to a magma drilling ship. 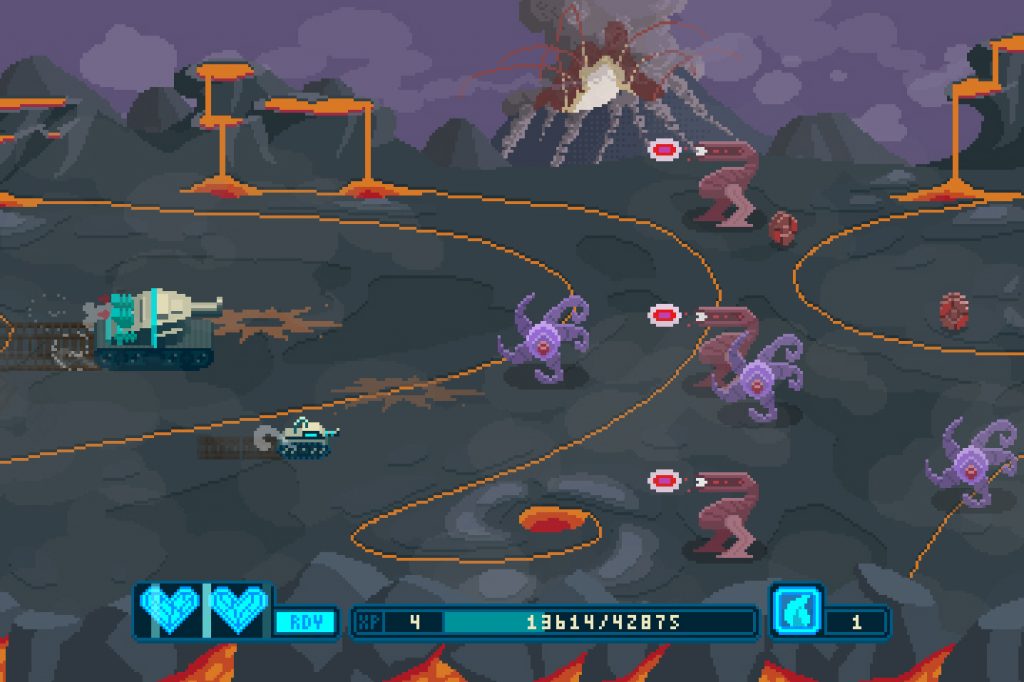 You control a main tank that can shoot and as it moves, but an invulnerable lil tank follows its daddy’s footsteps and shoots with you. The large tank has a small shield of health that when breached damages your hearts and, if you’re not careful, you can be killed in as few as 2 shots. As you kill enemies you gain exp which allows you to level up and earn upgrades. The tank upgrades are reflected in your tanks’ looks. And yes, you and mini-me become a matching set. Awwwwww!

As for weapons, you have a basic gun along with a random ability that gets charged up as you fight your way through enemies. I ended up saving the missile ability as it was by far the best – it even looked the best.

While you play, you can pick up powerups. Your lil tank will even get a tiny version. So far, there’s a rather lackluster array of turret powerups though – which switch out when picked up like in Contra. Of the powerups, you always get one that is simply better than the rest, which was the 5 shooter array weapon. Some others were cool, like the bouncing shot, but it was weaksauce compared to the 5 shooter.

This leads the gameplay to be kinda repetitive but challenging to some extent since the enemies can be quite the handful at times. The enemies themselves are quite alien with an assumption the creators gave a nod to the classic E.T. model from the terrible game of the same name.

Enemies build up with every level introducing new types of enemy too. The difficulty is ramped up nicely as well, and I never felt any level was too difficult in particular. 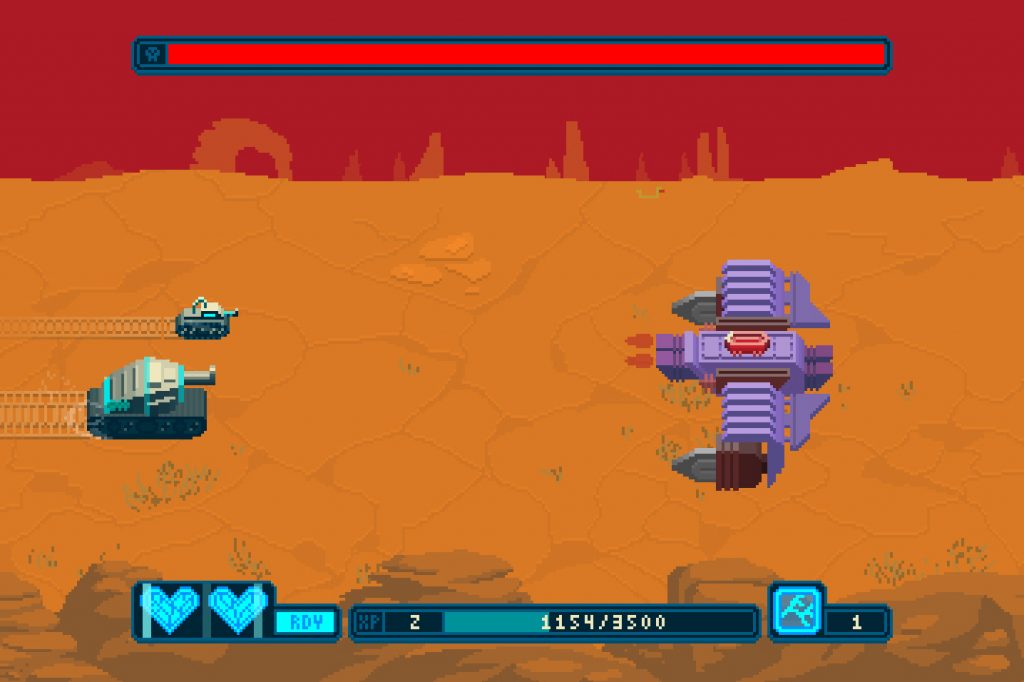 All in all, the gameplay is pretty mellow. Nothing leaps and bounds ahead of its time here. I wish there was a greater array of weapons and abilities, perhaps ones only the lil tank can do independently of the main tank or combined to create cool combos.

The music is pretty good at times! It’s thematically appropriate, and each boss gets a theme. In terms of how good or bad it is, it’s somewhat average for me. 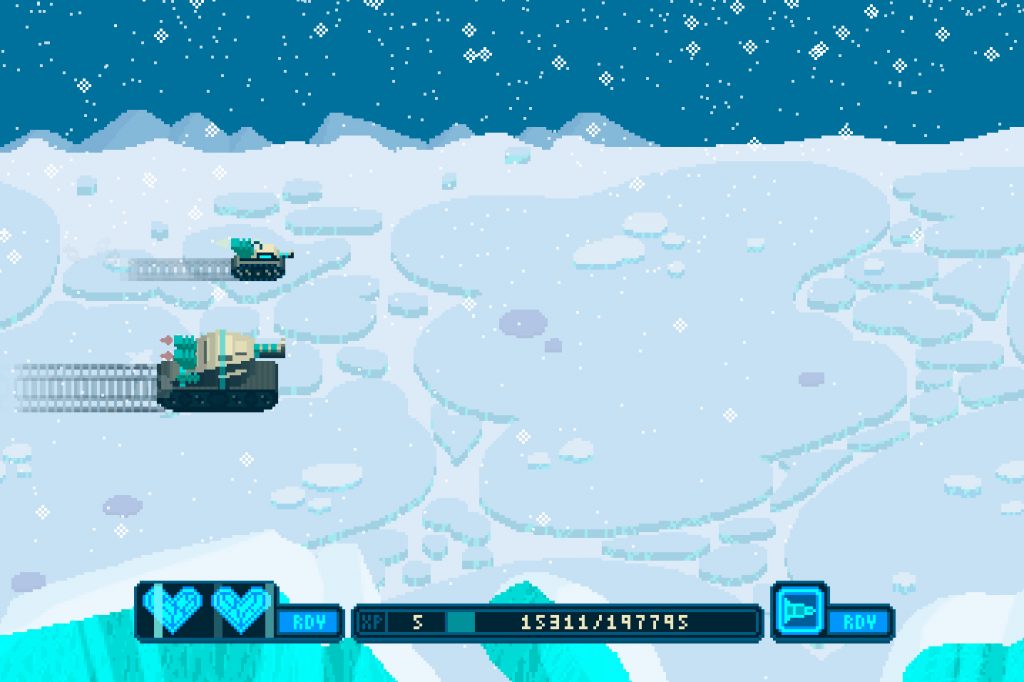 The bit graphics are good. Enemies and projectiles are quite clearly demarcated and little touches here and there pull the overall looks together with a little bow.

– Gameplay is a bit meh

– Nothing really stood out

A game with a lil charm but not tall enough to leave much of a lasting impression. The game plays well, looks well, and sounds well. Unfortunately, it’s only OK for me. I wouldn’t say its stellar or bad, just aiming a little too… small. To be a bit of a bastard just to get this line out the door - it really suits its name: Lil Tanks. "beep...."

Megan here! I am pretty well versed in all things weaboo and geek. I've loved videogames since I was born and even made my own for my 3rd year of Multimedia at the University of Pretoria in sunny South Africa. I have enjoyed anime from the days when Pokemon was considered satanic and Aniplex used to exist on DSTV. In the past couple years I have really gotten into manga, particularly Berserk to see where the story headed after the original anime. If there's one thing I will always love 110% it is cats. Don't doubt my faith in my love for felines.
Previous IDW to publish classic Star Wars newspaper strips
Next Neon Genesis Evangelion: The Shinji Ikari Raising Project Book 3 Omnibus (Graphic Novel) Review