Hitting just in time for Alien Day (4/26), Dark Horse’s newest Aliens miniseries is off to a good start. 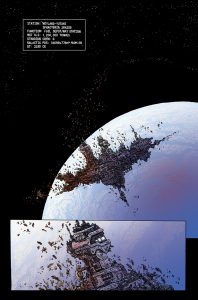 When Aliens: Dead Orbit kicks off, we’re introduced to a Company space station and her crew. Orbiting a gas giant of a planet, I pretty much immediately got the feeling that this space station wasn’t one that got a whole lot of visitors.

We also meet Wascylewski, the ship’s engineer and apparent main character of this story. Wascylewskiclearly isn’t overly thrilled to be stationed on the heap that is the Sphacteria. He’s a chain smoker who comes off as more than a little world-weary. Or maybe, galaxy-weary would be a better turn of phrase.

In any event, his boredom is broken fast enough when a seeming derelict ship makes its way too close to the station. The rest of the crew is woken up, and Dead Orbit kicks off as they attempt to contact the newcomers, to no response.

That’s about all I’ll blow of the story for you, though there’s not all that much to talk about honestly. This first issue starts off slowly, albeit well detailed. We learn plenty about the station and the ship that comes across it, but in terms of action, well there isn’t too much. 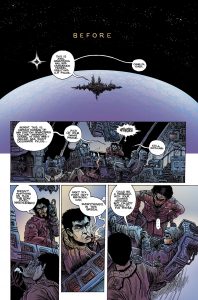 James Stokoe serves not just as the artist for Dead Orbit, but as the writer and letterer as well. That’s a lot of hats. But doing so much also gives Stokoe the ability to completely craft this story as he sees fit. Not that teams of writers and artists can’t work well together, we see it all the time. If everything is your own though, I have to imagine that it could only be a boon to the overall feel of a narrative.

There’s a ton of detail in here too, as I mentioned. We get a look at the crew, the station, and the derelict with pretty deep detail. I think it comes off as ‘slow’ for the simple reason that I’m used to seeing something else from Dark Horse’s Alien books.

So much of what they’ve published as to the IP has been pretty action-oriented. That goes especially for the latest stuff, which has fallen mostly under the shared-universe (Alien, Predator, Prometheus) that they’ve built.

Despite the “Aliens” name though (with an ‘s’), Dead Orbit seems to be cut more from the original Alien film’s cloth. Less all-out action and more creeping horror and suspense. The way that this first issue ends anyway, it’s definitely feeling like that’s going to be the tone.

That’s a good thing, but one that might take some getting used to for you if you were expecting marines filling xenos full of lead. 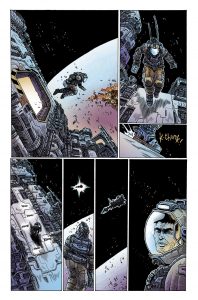 There isn’t anything about Dead Orbit that’s pretty – and I mean that in the nicest way possible. Stokoe’s artwork is grimy, gritty, and otherwise perfectly fitting with the franchise’s ‘old-new’ tech aesthetic.

That’s not to say that there aren’t some awesome images floating around in this issue though. The planetkcapes are terrifically realized – with the station casting its dark shadow against the brilliant color of the gas giant that it orbits. Cool stuff indeed.

Actually, I have to mention the color work here too, which is amazingly cool. Most of the issue is colored in in only a few shades, but it works incredibly for this tale. Likewise the planet that I mentioned wouldn’t be half as cool looking if it was flatly shaded.

Dead Orbit is a good start to this new miniseries from Dark Horse, but keep in mind that it's not the kind of issue that's going to bowl you over. Even so though, it sets up the story and characters very well, and manages to impress with some of the visuals. Plus, it's kind of important if you're going to be getting into the rest of the series, which seems like it should be a worthy endeavor.

Jason's been knee deep in videogames since he was but a lad. Cutting his teeth on the pixely glory that was the Atari 2600, he's been hack'n'slashing and shoot'em'uping ever since. Mainly an FPS and action guy, Jason enjoys the occasional well crafted title from every genre.
@jason_tas
Previous The X-O Manowar #2 Preview is Here
Next Jeff Lemire’s Black Hammer gets the graphic novel treatment