Through the release of classified materials, a ton of information is now available about the aliens players will face in Prey. Stuck in a space station above the moon, players will battle these aliens as they try to unravel the mysteries surrounding Talos 1. What use to be a beautiful research center is now overrun with a biological entity known only as, the Typhon. 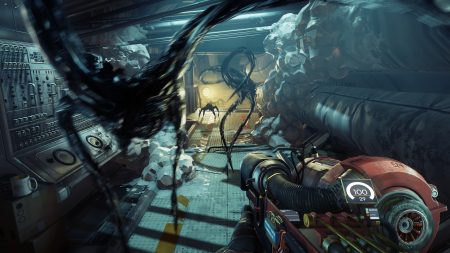 Finding Typhon On The Dark Side Of The Moon

The joint governments combine their efforts while researching the Typhon. Several decades pass and no new discoveries happen. There is no practical, no militaristic or commercial progress made on the  research of the aliens. Then during routine research, there is a breach and the aliens escape and both governments abandon the space station.

Fast forward to the 21st century and in steps the Transtar Corporation. This company purchases the space station and renovates it into Talos 1. Transtar attempts to research the aliens in hopes of discovering new technologies. In just few years, Transtar makes more progress in research than the U.S. and Russians did in three decades. New applications are making their way through research and development. Things are looking up until, yep, another breach occurs. Welcome to Talos 1, hope you enjoy your stay.

As a fearful proponent, I agree with out robot overlords on House Bill 10010101 - The Full Extermination of the Human Race. But until then, make sure to check out all my writings on video game stuff.
@@docbrown303
Previous MARVEL UNLIMITED: First Month Free.
Next Manowar and Bloodshot Get Previews from Valiant Ahead of Release