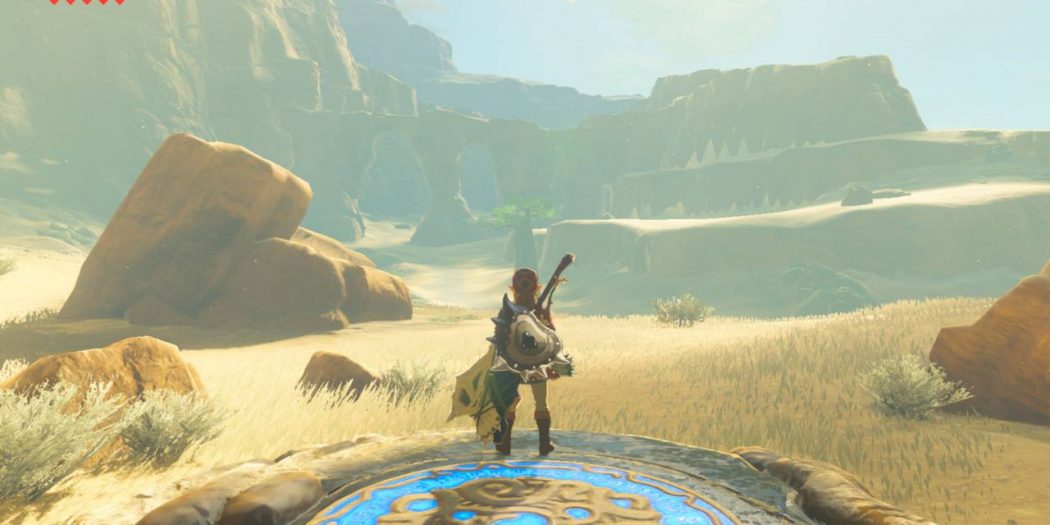 Home / News / The Legend of Zelda: Breath of the Wild Delivers

The Legend of Zelda: Breath of the Wild Delivers

More than 20 hours of hands on with The Legend of Zelda: Breath of the Wild is enough to create an addiction.

The Legend of Zelda: Breath of the Wild expands around every corner.  Any time I think I have a handle on the game’s scope, it takes it apart.  I learn shrines are the new dungeons, and then board an enormous camel that provides the traditional dungeon experience.  I think I understand all of my tools, and then a new way to consider the bow, the magnet, or stasis is introduced.  I think I’ve got the world figured out, and then I see an enormous dragon flying across the sky, bigger and longer than the bridge I’ve been riding across.

When I’ve got a grasp on food, and how to use it to cook, I see a tip that I can use it to distract enemies.  When I understand combat, I acquire an ability that changes my approach.  When I think I’ve seen the ends of the world, I find out just how wrong I am. 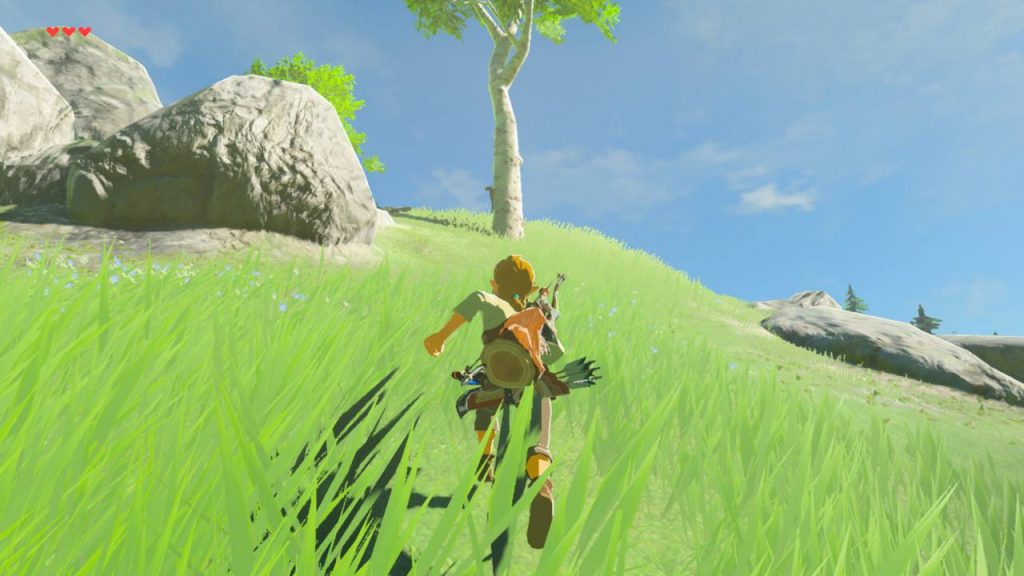 The Legend of Zelda: Breath of the Wild is the most cohesive open world game I’ve played.  Certainly, there are gathering side quests, and people who want monsters slain, and quest givers who go to sleep at night, where you can find them snoring in their beds, and watch them wake up in the morning (what, doesn’t every game do that?).

Breath of the Wild is built of its systems.  Physics drive puzzles, which means every puzzle has multiple solutions.  Build a bridge, or build a catapult.  Roll a ball through a maze, or toss the ball above the maze and catch it at the finish.  Put a barrel onto a pressure switch, or stop the pressure switch’s time when you’re standing on it for the same effect (though you’ll have to be quick).  Giant boulders will fly through the world with a bit of effort, and bombs will roll (and keep rolling), with wind or incline or a bit of a push.

You have all the tools at your disposal that you’ll need to work with those physics, and keep combat unpredictable.  You can stop time for all manner of objects, letting you build up force on rocks you can’t move on your own so that they’ll sail.  You can control metal rocks, weapons and boxes with your magnets, setting them into motion.  You can use a deku leaf to mimic the wind, or use the wind itself to guide your actions. 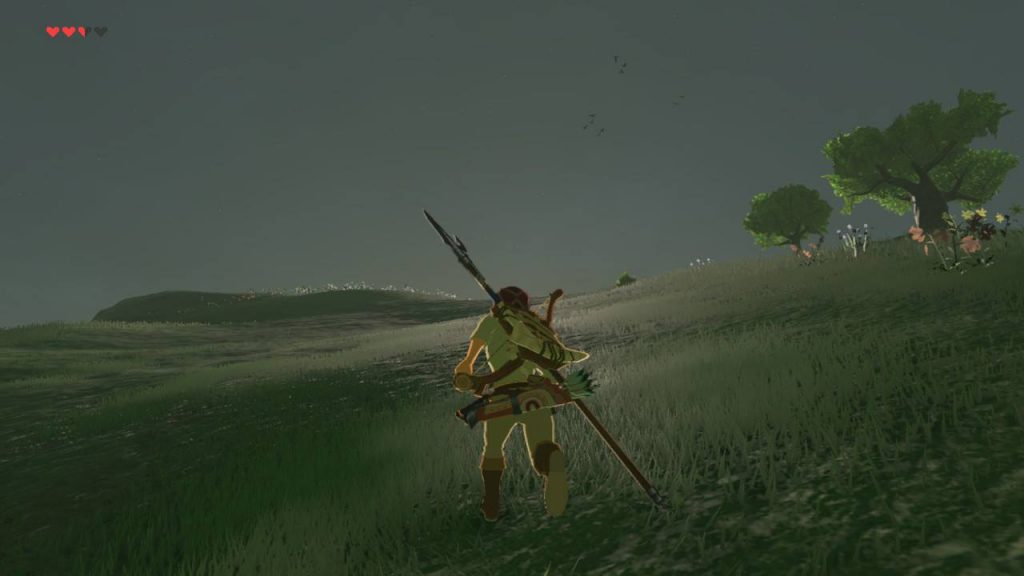 Using all of those together, your options are almost unlimited.  Even as I write, I think of more ideas to interact with the world- can I stop an arrow mid-flight?  Can I send a tree rolling down a hill to strike a camp of enemies? Or can I use that tree as some sort of rotating door, in conjunction with a barrel as its pivot, and another to twist it around, in order to keep enemies in an eternal trap, perhaps while they’re somehow assailed by the elements?  In a patch of burning grass, perhaps, but of course then the tree would catch fire too, and-

It’s addictive, pushing the world and the way it works more and more every time I play.  Its why I’ve only finished two of the four Divine Beasts (the game’s more traditional dungeons, the two I’ve done already twistingly ingenious), only beaten about thirty of the shrines, and only found about three of Link’s memories of- well, I can’t spoil everything.

If you’ve ever be concerned that a transition to an open-world foundation would take away from The Legend of Zelda’s story-telling strengths, don’t be: they’re here in full force.  Link’s expressive faces.  Fantastic allies who combine disparate attributes to create believable characters.  The bizarre, the brilliant, and the moving narrative pillars that set Zelda games apart.  And all of that too with nods to the familiar, the nostalgic Zelda lore, including those we haven’t seen in a while: Koroks, Gerudo, Zora, Gorons, Lizalfos, Bokoblins, Chuchus, all re-imagined in new, often exciting ways.

The loot of the game, including armor, weapons, and shields, are vitally balanced so that you’re not rifling through pieces of trash in the hopes you’ve found a treasure.  Armor gets better as you go, but much of that comes from abilities that are suited to specific moments: warm doublet’s for cold mountains, light garb for stealth, or traditional vais’ clothing for hot deserts (that’s Gerudo for woman, for those who don’t know).  Every armor piece can be upgraded, and their colors can be dyed, and, at the end of the day, you can wear anything for its aesthetic.

Weapons scale a little harder- later weapons outclass their predecessors in every way, but the coolest you’ll want to preserve, the best save for the hardest battles.  Usually, I find myself using the weapons of the enemies I’ve most recently killed no matter where I am in the world, just to ensure combat isn’t over too swiftly. 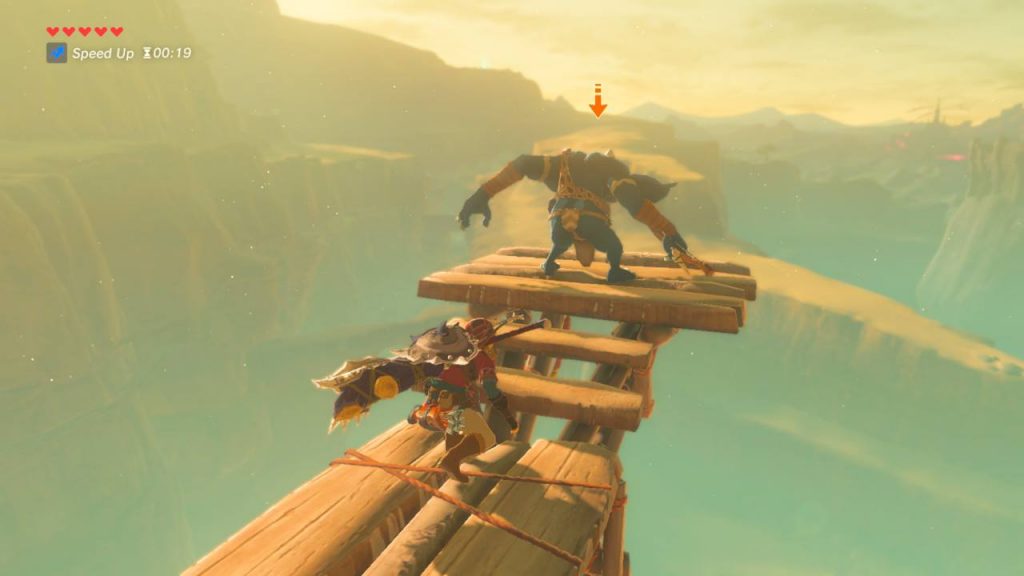 Breath of the Wild delivers plentiful game overs.  Whether a dangerous puzzle punishes your overly ambitious, but largely unnecessary, idea, or a very large Moblin smacks six of your hearts out of you in a single strike, death’s door will be open and swinging (can’t time-stop that, unfortunately!). Fortunately, auto-saves are often plentiful, and I rarely find myself frustrated by the results of stupidity or slow reflexes.  And if you do find yourself outmatched in one way or another, you can always throw yourself into cooking to make elixirs that improve your survivability in the face of heat, cold, or enemy attacks, or into other parts of the world where you might build yourself into a true stud, with spiked lizalfos weapons or golden shields and heavy armor, or bows that fire three arrows at once.

But be careful not to get distracted- it’s easy to find yourself on the other side of the game world, after following a string of shrine to tower to new animal (whose picture you have to take) to shrine, and then a new stable, a new town, a horse who reminds you too much of Sea-biscuit to leave behind, a camp of monsters whose treasure you surely need, and then- is that a centaur?

At least, two hours later, you can fast travel back the way you came (even if you’re falling to your death- a fact that’s saved me on more than one occasion!), and shortly be back on the road to the world’s salvation.

Then it’s back to mining for sapphires, hunting for elixir, or scouring the map for missing memories.

A proper review requires that I finish the game, but I can solidly deliver the verdict: The Legend of Zelda: Breath of the Wild is a necessary piece of the Wii U and the Switch’s library, and a showcase of a game whose every facet comes together in a perfectly cohesive whole.

Tags Nintendo Nintendo Switch The Legend of Zelda: Breath of the Wild zelda

Brutal Gamer's Nintendo Editor began his gaming life a little late- at five years old. But he's made up for it in the two decades since, gaming and writing about gaming with the same passion, fervor, and unrelenting love as his five-year old self.
Previous The Flash Into The Speed Force S3E16 (TV) Review
Next First Look: Telltale’s Guardians Of The Galaxy