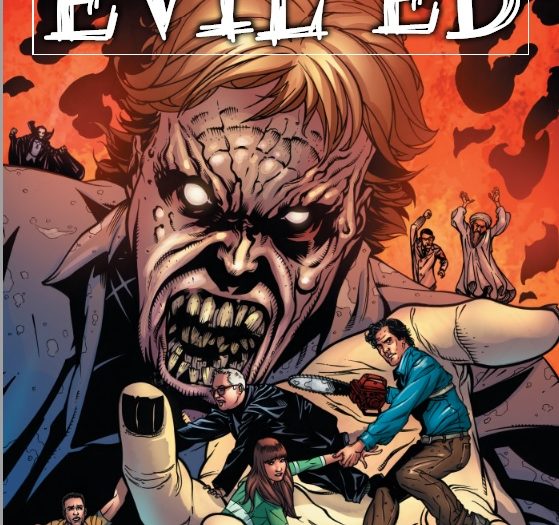 Evil Ed has taken over Hell, and has his sights on Ash Williams. Check out how his plan unfolds in Evil Dead 2: Revenge of Evil Ed.

Evil Ed, as he is known, was once a research assistant to the man who uncovered the Necronomicon Ex Mortis. We all know what happens to those who read from the cursed book. 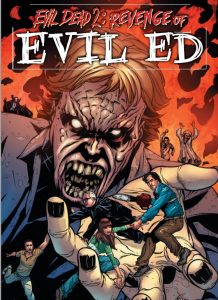 Ed seems to have aquired a bit of power, and quickly decides to put it to good use: to go after Ash Williams. Recruiting some of his best (or worst) archangels of evil: Hitler, Dracula, Rasputin, Bin Laden and The Mummy, Ed is pulling out all the stops.

Playing to Ash’s ego, they work up an Employee of the Month award with a vacation to Las Vegas. Las Vegas, the city of sin, a trip by bus. Hey, who is going to turn down a free trip to Vegas? Going through a tunnel quickly leads the bus off the schedules path. Luckily Ash packed his shotgun and chainsaw in his carry-on luggage, as he is met with a significant number of deadites as soon as the bus passes the tunnel.

This wouldn’t be an Evil Dead book if we didn’t have some gratuitous and excellent violence. Some decapitations and parts exploding.

Now, typically a bus full of deadites would mean the end of an average person. Ash, is certainly no average guy. He comes to the party armed with weapons as well as experience. Even Ed’s Generals are not immune to his abilities.

One is shot. Another decapitated. And then Ash gets his hands on one sweet ride. Now, trap or not, you know he’s going to have a good time working through these deadite fools.

It is always fun to see how the deadites think they will take over the world. Sometimes with a little deception, other times by brute force. You would think that with the powers Ed has recruited, that the odds would be more in his favor. That is just not the case. These generals seem to stand up as well as limp linguine, just doing as they are told, regardless of their own histories.

Evil Ed has taken over Hell, and hatches quite the plan to get his revenge. However, as dim as Ash can be at times, it is a difficult thing to get past his chainsaw. Check out the massacre.

A fan of media on multiple platforms, I am always watching or playing something! Who knows what I will be on to next?
@mackeyp42
Previous Styx: Shards Of Darkness – Co-op Assassination Trailer
Next X-Men Prime #1 (Comics) Preview