PS Plus: Free Games Line up for February 2017

PlayStation Plus games have been officially announced for February releasing on Tuesday the 7th. LittleBigPlanet 3 and Not a Hero is Plus’s main games coming to the PS4. This should be a surprise to fans that are missing their AAA games, not in the loop but maybe this is a change.

LBP3 takes us make in the wonderful world of the Sackboy featuring new and improved puzzle platforming machines, new worlds and side quest, Plus the thousands of community made leaves (definitely better than anything I could make). Also introducing Swoop; the bird, Oddsock; the loveable dog, and Toggle; the size changing creature.

Not a Hero, in the best terms possible, is a retro style, 2D actions-platformer, set in the future where your character is absolutely Not a Hero from any stretch of the imagination. You (aka Steve) must clean up the crime in the city demanded by “anthropomorphic rabbit and mayoral candidate from the future named BunnyLord.”

Coming to PS3 is Starwhat the only local multi-player space Narwal fighting game you ever heard of. As they say “Upgrade your existence”! The second game coming is Anna is a supernatural first-person puzzle game that is sure to keep your mind and heart racing as Anna is always watching.

Lastly the PSvita, Ninja Senki DX is and old school platformer where you play as a Ninja on a quest for revenge. TorqueL is a different take on the puzzle action-platformer genre where to solve the puzzles you must roll and extend yourself.

February is short so remember to play some Starwhal with your loved ones and don’t forget to download last January’s PSPlus games before there gone.

Dylan is a writer, gamer, avid movie lover, and PlayStation extraordinaire. Currently, he attends Radford University in pursuit of a BS in Media Studies with a concentration in Journalism. When he’s not writing the next epic post (but you know he is), he plays games like Destiny, Uncharted, Wolfenstein/DOOM/Dishonored; long story short: If I played the game, I liked it; if I haven't played it, just remember that I'm in college.
@Dylanslegos
Previous Sunless Skies on Kickstarter and is Already Funded
Next Ghost in the Shell Big Game spot is now online 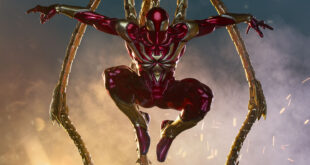 Civil War’s Iron Spider armor is undeniably one of Spidey’s most striking costumes. And now …