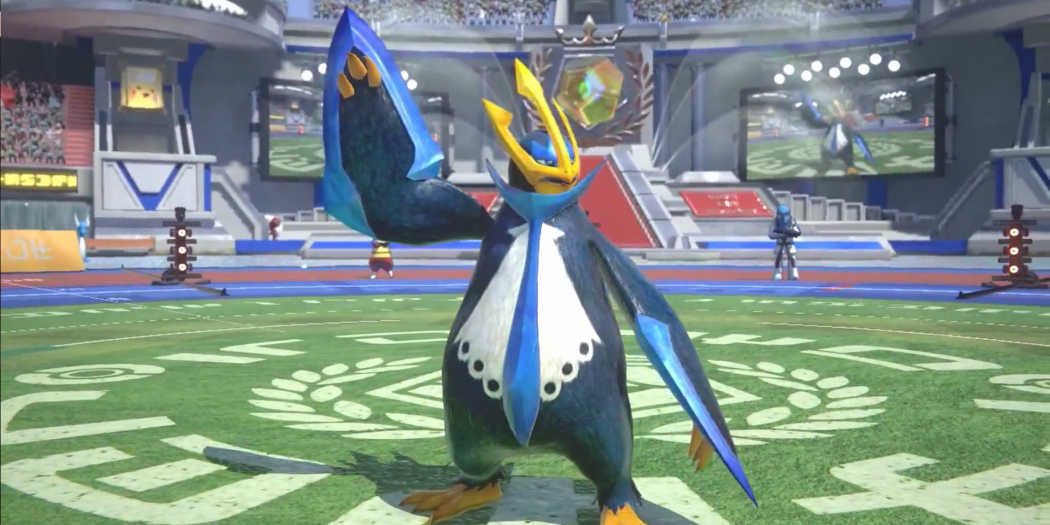 Pokken Tournament’s line-up of Pokemon fighters is about to expand again (in arcades) with the introduction of the regal emperor penguin Pokemon, 4th generation Water Starter Empoleon.
The Water-Steel type looks to pack a respectable punch, using his flipper/claw hybrids, beak, and water prowess in combination.  He also continues the Pokken tradition of sounding more like a man than a Pokemon.  His ultimate move combines a giant Whirlpool with a flurry of quick charges, but no doubt the greatest addition to his arsenal is his Surf move, which he uses to crash against his opponents, after looking down on them from the crest of a wave.

There’s still no word on whether or not the recent additions to the game, including Scizor, Croagunk, and now Empoleon, will ever make their way to consoles, whether as DLC for the Wii U or as part of a Nintendo Switch port.

Empoleon will be hitting Japanese arcades on December 15, 2016.
Check out the trailer to see Empoleon in action, and then let us know how much of a crime it is that the much cooler insert-Pokemon-name-here (Ursaring) hasn’t been invited.

Brutal Gamer's Nintendo Editor began his gaming life a little late- at five years old. But he's made up for it in the two decades since, gaming and writing about gaming with the same passion, fervor, and unrelenting love as his five-year old self.
Previous GameStop reveals deals and most-wanteds for the Holidays
Next Evil Dead 2: A Merry Deadite X-mas (comic) Review