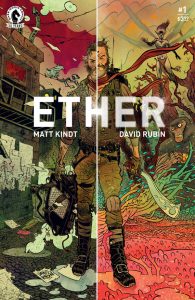 A science-minded adventurer gets mixed up in the mysteries of a fantasy world in this charming new adventure from an award-winning creative team. Boone Dias is an interdimensional explorer, a scientist from Earth who has stumbled into great responsibility. He’s got an explanation for everything, so of course the Ether’s magical residents turn to him to solve their toughest crimes. But maybe keeping the real and the abstract separate is too big a job for just one man.

Boone Dias is a weathered and logic-minded guy. He seems rather relatable. And then he approaches Glum, the gatekeeper of the crossroads. Glum is a giant purple beast that requires a bit of a loose imagination to accept. Within the first two characters and first two locations, you know right off the bat, that this is not your grandfather’s story.

Now this is one guardian who enjoys his job. He is basically a doorman for the magical worlds. Stop the chaff at the door. But what can be better than drop-kicking those you welcome into the universe. By the third page, we know that Ether is anything but average. 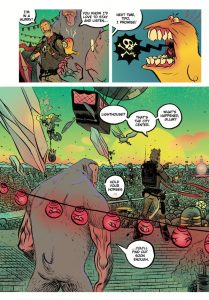 Boone is on his way to Agartha, the capital city of the Ether. He’s been there before, and he’s on another trip to research what makes the Ether so special. Though as soon as he lands, Glum informs him that this trip will not be like those before. Glum has been asked to escort Boone to the Mayor’s office. This is never a good start to the story.

Kindt’s idea of a portal between worlds, with a very particular way to cross is a great spin on themes that have come before. You will have to read the books to learn the specifics, but it’s wild. Add to that, if/when you get through the portal, then you are met with Glum. This 1-2 punch is enough to scare any travelers that had a possibility of making it this far. I’ve only been able to read the first two books so far, and I have to tell you, I’m loving it. The story and the characters are beyond what I expected. The range of who and what you will find in the Ether is wonderful. Who expected that a little bird’s song could do so much damage?

Do yourself a favor and pick a copy of Ether. David Rubin’s artistic style is just outlandish enough to be a perfect fit for Kindt’s unique story. Ether is a limited run, so make sure you don’t miss out. You will not be disappointed.

Mystery Can Be Magic

Kindt and Rubin's Ether is one of the more unusually amazing stories right out of the gate. Anyone who enjoys comics, and wants a fresh story, should grab a copy of Ether today.

A fan of media on multiple platforms, I am always watching or playing something! Who knows what I will be on to next?
@mackeyp42
Previous Supernatural S12E03: The Foundry – Analysis and Review
Next PSVR (Hardware) Review