Mignola Returns With More Hellboy in 2017 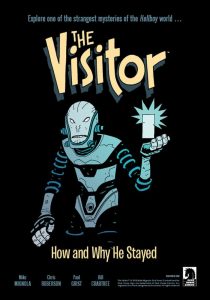 While Hellboy is indeed dead, that does not mean all his stories have been told. In 2017, Mike Mignola returns with Chris Roberson, artist Paul Grist and colorist Bill Crabtree to give us more of what we love.

“The Visitor: How and Why He Stayed,” will be a 5-issue story from the time of Hellboy’s first appearance. This promises to be one of the stranger stories we’ve seen. In ‘Hellboy: Seed of Destruction’ we are given a glance of aliens. Apparently they were interested in Hellboy then, and they changed their plans only at the last moment.

“The Visitor: How and Why He Stayed,” by Mike Mignola, Chris Roberson, Paul Grist and Bill Crabtree, arrives February 22, 2017.

A fan of media on multiple platforms, I am always watching or playing something! Who knows what I will be on to next?
@mackeyp42
Previous An Astro-Affair: Interview With Dan Fisher of Astro-Miners
Next Campaign trailer launched for Titanfall 2