Chimichanga: The Sorrow of the World’s Worst Face #1 (Comics) Review

Chimichanga: The Sorrow of the World’s Worst Face. With a title like that, you have to be interested.

I bid you an almost fond hello internet, and welcome you to another comic review. This week, we endeavour to run through Chimichanga: The Sorrow of the World’s Worst Face.  This Chimichanga is the first in the new series, which will go on for whoever knows how long, but I am going to treat it as a solo piece. I thought this would be a good place to quickly explain why I, and presumably other reviewers, do this. You see, with the site’s reviewing structure being the way it is, there is no guarantee that I will get the second issue of Chimichanga. So one must treat every issue that he or she gets as the only issue. Alright, now that you have all been educated, let me explain why I wasted another week of my life doing this. 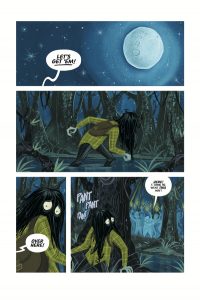 The story here is a well told one indeed. By that, I mean that it is by no means breaks new ground. Chimichanga is a story of a circus, filled with “freaks”, kind of like the one in the Darren Shan books. The circus appears to be well, but is visited by a disfigured fugitive that stirs up trouble and plot motivation. But this is just the setting, and while the story may not be  original in its message or motivations, there is originality here. With stories like this, ones that revolve around previously used ideas, the real creativity comes in the characters. It is just sad that they are boring too. So; the setting, characters and the message are either boring or overdone, meaning this is a sinking ship of mistakes, right? Wrong!

What saves the comic from the valley of mediocrity is, as always, the writing. The characters come across as relatable and compelling. They also appear to be already established, which can be good and bad in a story. A comic can truly fumble with this, but Chimichanga makes the characters so relatable that one simply slides into the everyday life of this circus. It makes you feel true emotion for the characters and their troubles, being ugly in a world that values beauty. While I was underwhelmed by the setting and predictability of the plot, I am compelled to read the next issue to see how this all pans out. 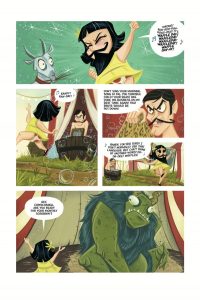 The art is amongst the only original things in Chimichanga, and portrays the comic beautifully. It reminds of the art in those old-fashioned circus posters. Saying that it suits the setting perfectly would be an understatement, and it helps the immersion of the reader immensely. Each character looks unique and interesting enough to hold my attention, and the art is most likely the driving reason for me reading this comic so quickly. It simply amazes me how the artist managed to put so much depth into this art, while retaining that instrumental simplicity a comic requires.

It is impossible to hate such fitting art, but it is just a shame that it has to fit to such boring scenery. I severely hope that anyone reading this enjoys dark forests and circus grounds, because that is all you will be looking at for the duration of the comic. With the exception of the inside of the titular Chimichanga’s stomach, there is never a moment where the scenery changes. However, let it speak for the art that I barely noticed it.

Give it a try, but don't expect much

My biggest problem with Chimichanga is easy to see; I was bored. The plot was one that I am not only used to, but so used to that I am tired of it. The art and writing save it somewhat, but this does not denote from how exasperated I was throughout. This is clearly not the first Chimichanga comic out there, but it has not inspired me to seek out the rest. Still, it is important to note that even though I was incredibly bored, I was compelled to finish it and managed to get immersed anyway. That might just mean that I am easy to immerse, but remember that while making any purchasing decisions. Take it or leave it, but just don’t leave it with me.