Here on its 50th anniversary, Star Trek is once again pretty darn popular. That’s not anything different to hardcore fans, since the franchise has been a mainstay since the ’60s. For those who aren’t devout devotees though, Trek might seem like something that comes and goes with the tides.

The original series got popular mostly after it completed its original airing. But when The Next Generation rolled in, it brought a golden age with it that lasted all the way through the 90s (and then some). Spin-offs, comics, movies, toys, and video games were commonplace for a good long time. And then… that was it. After Enterprise attempted to reinvigorate Star Trek with its prequel leanings, there was nothing till the JJ Abrams film.

That movie of course, fractured the Trek timeline, creating an offshoot universe. Everything was different. Some things in a minor way, some things in a major way. The series recently saw the release of the third film in the series, Star Trek Beyond, and it’s been more or less popular with fans and newcomers. One thing it hasn’t resulted in though, is merchandise. Well, expect comics. 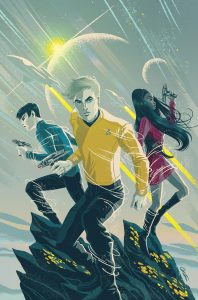 Though new Trek toys and video games haven’t made any kind of impact with the public, IDW’s comics most definitely have. The franchise has spawned a few series’ of books from the publisher and all of them have been quality.

This Fall will see the launch of a new anthology series, but also a newly announced ongoing called Star Trek: Boldly Go. It’ll be taking the place of the currently running book, and will focus on the post-Beyond Abrams-verse. There’s no word on whether or not any of the tales that’ll be told will be canon or not, but chances seem pretty good that they might be.

Seeing that this’ll be all taking place after Star Trek Beyond, I’d imagine that the new Enterprise A will be the ship that Kirk and crew will be doing their trekking from. Not only that, but IDW says that there will be all new uniforms for the crew, so we might be looking at a riff on the original motion picture uni’s or the familiar red and black outfits. Then again, it might be something all together new. We’ll see.

Jason's been knee deep in videogames since he was but a lad. Cutting his teeth on the pixely glory that was the Atari 2600, he's been hack'n'slashing and shoot'em'uping ever since. Mainly an FPS and action guy, Jason enjoys the occasional well crafted title from every genre.
@jason_tas
Previous Prison Architect Updated for the Final Time
Next X-O Manowar #49 (Comic) Review