What’s better than your usual assortment of Marvel Comics? Apparently, having cosplayers on the cover.

Return of the cosplayers

So Marvel Comics’ cosplay covers proved pretty popular with fans when they first made their presence known, and Marvel is responding with evermore of ’em. As with the first wave too, these aren’t hastily slapped-together outfits either. No, these cosplayers are so good, you’ll have to look twice. 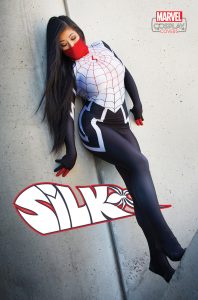 As for Marvel, they’re pleased as punch to give this group of super-fans a little time in the sun, and on the covers of some big time books.

“The response to our first set of Cosplay Variants was so incredible, we simply had to do a second wave,” says Axel Alonso, Marvel Editor-in-Chief. “And, of course, we were able to find a great crop of cosplayers with some truly fantastic costumes. We’re thrilled to shine a spotlight on an ever-growing community that continues to show love for us and our characters.”

There are no firm street dates just yet on when you can expect to see these special editions on the racks, but they’ll start landing in September. Here’s what to expect:

Jason's been knee deep in videogames since he was but a lad. Cutting his teeth on the pixely glory that was the Atari 2600, he's been hack'n'slashing and shoot'em'uping ever since. Mainly an FPS and action guy, Jason enjoys the occasional well crafted title from every genre.
@jason_tas
Previous Gamescom 2016: No retreat for this Space Hulk: Deathwing trailer
Next Heart&Slash (PC & Mac) Review