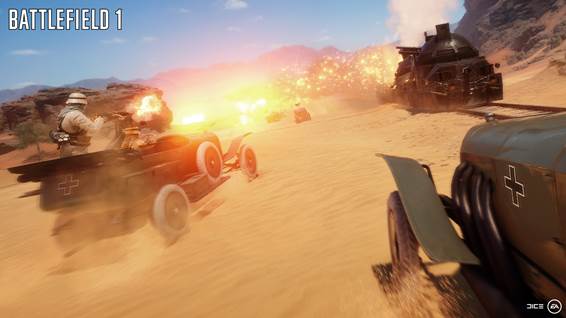 Gamescom 2016: The Battlefield 1 beta is coming

Who’d have thought WWI could provide an experience that looks more visceral and insane than any other upcoming shooter?

Good lord, there’s a lot going on in that trailer. Planes, warships, horses, tanks, freaking war-trains… Pure action looks to be the theme of the day in Battlefield 1, and I don’t think you can make it look much better than this blastathon does in the above trailer.

And if you’re in with the throngs of gamers who can’t wait to get their hands on it, then you’ll be happy to know that the beta for Battlefield 1 is coming up. Officially announced at the Gamescom show, the beta will commence on August the 31st, and will be open to all… with a catch. You’ll have to sign up as a Battlefield insider and choose your platform before the date of August 21st if you want in. Not too difficult.

Remember too that since it’s a beta, this’ll be but a tease of the full game. Still though, you’ll get a good dose of it with both Conquest and Rush modes available. As for where you’ll be playing, that’d be the Sinai Desert that you see in the trailer. Player count for the map? You better believe it’s 64.

The train will be playable in the beta too, as will horses, and a trio of new Elite Classes, including the Sentry, Flame Trooper, and Tank Hunter. So even though there’s only one map, there should be a fair bit that you can try out.

As for the full game, that’s due for consoles and the PC on October 21st. Early Enlisters with Deluxe Editions will be able to get it a little before that, on the 18th, while Origin Access members will get it before anyone else. The Play First Trial for Battlefield 1 starts on that subscription service as of October 13, exclusively on the Xbox One and PC.

Jason's been knee deep in videogames since he was but a lad. Cutting his teeth on the pixely glory that was the Atari 2600, he's been hack'n'slashing and shoot'em'uping ever since. Mainly an FPS and action guy, Jason enjoys the occasional well crafted title from every genre.
@jason_tas
Previous Gamescom 2016: Call of Duty Zombies totally goes to the 80s
Next August 24th Valiant Previews: Gen Zero, Faith, Rai, Valiant Handbook