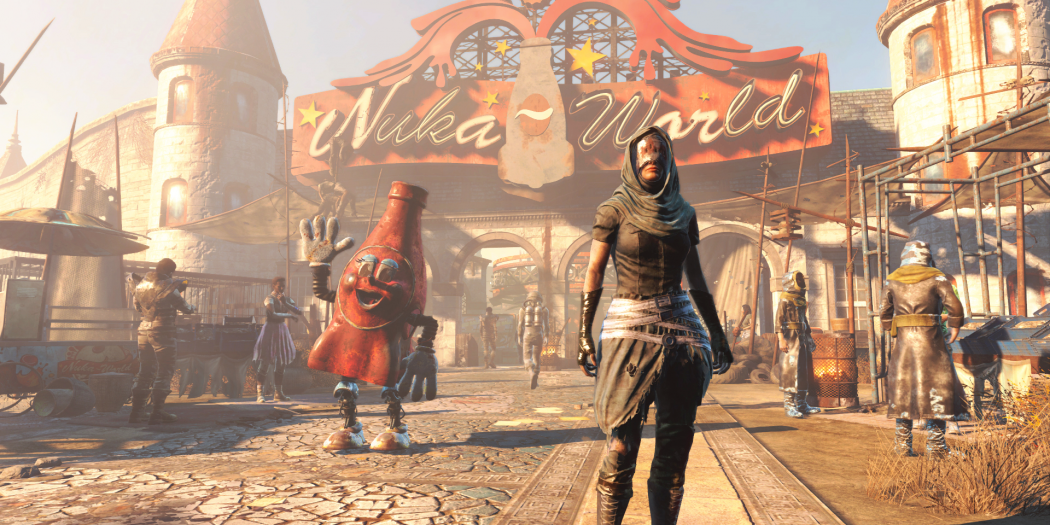 It’s the fizziest place on Earth… and maybe the most dangerous. Post-apocalyptic theme park Nuka World also looks like it might be one of the coolest Fallout experiences ever.

Wow is there a lot going on there, and unsurprisingly it all looks great. Bethesda just knowns what they’re doing with Fallout and every expansion has a fresh feel to it. Nuka World is actually the sixth add-on for Bethesda’s hit Fallout 4 believe it or not. And it looks like one of the most expansive too, with tons of content and plenty of the trademark dark humor that the series is known for.

You can expect to explore a “vast” amusement park in this new expansion pack, and while it used to be a happy place for families, well… it’s not now. Nuka World has become a haven for Raiders in the time of the Fallout series, and apparently ghouls and various mutant beasties too. You can expect to explore both wasteland and in-park zones. So look for Safari Adventure, Dry Rock Gulch, Kiddie Kingdom, and the Galactic Zone to all be included. Well, in some form.

Bethesda says that you should expect “new quests” as well, of course. So get ready to dive back into Fallout 4 yet again, and burn away countless more hours in the wastes of New England.

Jason's been knee deep in videogames since he was but a lad. Cutting his teeth on the pixely glory that was the Atari 2600, he's been hack'n'slashing and shoot'em'uping ever since. Mainly an FPS and action guy, Jason enjoys the occasional well crafted title from every genre.
@jason_tas
Previous SDCC 2016: Be the Batman in Arkham VR
Next Brutal Podcast 5: is Live