A consistently solid book since its debut, Darth Vader ends with a double-sized issue #25.

You don’t know the power of the dark side…

This is going to be one not to miss if you’re a Star Wars fan. Or really, if you’re just a fan of good comic books. Simply put, Marvel Comics has done a great job with the Star Wars universe since taking over publishing rights. They’ve had a bunch of quality mini-series’ come and go, along with the flagship Star Wars book, and Darth Vader.

And now Vader is indeed closing up its tale with issue #25, and it should be an issue for the ages. Don’t forget that Marvel’s comics are in canon as far as the Star Wars story goes, and the publisher is promising big things with this issue. 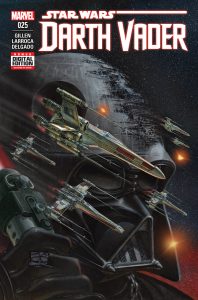 Covered by the best

Framing the action will be a series of cover illustrations by some of the best in the biz, across a set of variants. Yes, there’ll be an ‘action figure’ variant, but in all, you can expect separate covers from:

Yes, that’s a lot of artists. Then again though, this is an important issue to close out one of the most important series’ in the Star Wars stable. So you know, mark your calendar is what I’m saying. Darth Vader #25 marches onto retail shelves and digital formats later this year, from the team of writer Kieron Gillen and artist Salvador Larroca.

Jason's been knee deep in videogames since he was but a lad. Cutting his teeth on the pixely glory that was the Atari 2600, he's been hack'n'slashing and shoot'em'uping ever since. Mainly an FPS and action guy, Jason enjoys the occasional well crafted title from every genre.
@jason_tas
Previous Pokemon Go Bug Problems and Reactions
Next No Man’s Sky Delayed for Three Days On PC