An interesting idea with a botched execution

Early Access is an idea that has faced a large amount of opposition ever since it was introduced. Quite a few great games have been made with it, but many are distrustful towards it. One of the main reasons why is that many Early Access games just aren’t up to scratch Concealed Intent is a turn based, tactical space combat game currently in Early Access. It has quite a few interesting concepts, but overall fails to do enough with them. It turned out to be one of the games that gave Early Access its less than stellar reputation.

The main concept around which Concealed Intent was built is locating your enemy. One of the main game mechanics is how noticed ships are, which affects how accurate weapons fired at it are. Actions of any kind make you visible, movement, firing your weapons, and scanning, causing all of them to come with an element or risk. Scanning in particular is a bit of a gamble. You need to make yourself more visible in order to see enemy ships. You can use items to make yourself harder to be targeted, but you have a limited supply. 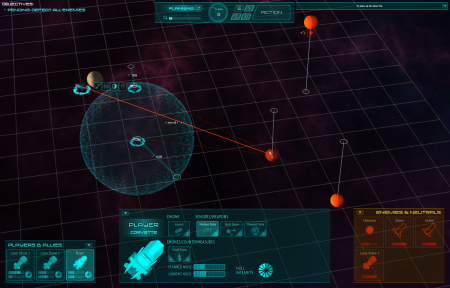 This is combined with the game being turned based and three dimensional to fully work. Before each turn you tell your ships where to move, what to target, or simply to do nothing. When the turn begins, all ships act simultaneously. The result is that a fair bit intuition is required, as you must predict your opponents moves and act accordingly. With the game being in three dimensions, another layer is added as ships can move up, down and hide behind planets.

There is a story, but only just barely. There are a handful of messages in each mission giving you context as to what you’re doing. The game itself seems disinterested in telling a story, as while there are characters, none of them have names. They’re simply referred to as “codebreaker” or “cousin.” It’s most likely a good thing that the game isn’t trying hard to tell a story, because the plot is absurd. For some reason, a band of mercenaries taking over two entire galactic powers is supposed to be a plausible threat.

What does it do right?

For what it’s worth, the game does manage to create interesting scenarios with these mechanics. Finding an enemy ship hiding behind a planet and figuring out how to corner it. Having to be careful due to a hidden minefield around an enemy base.  Later in the game, a large amount of customization unlocks, allowing for different approaches in missions with equipment.  This allows you to freely go all offense, all defense, or somewhere in-between. Sadly, this is all that this game does correctly, and even then only a couple of missions feel engaging and the customization feels a little shallow. In all other fields, it’s rather disappointing. 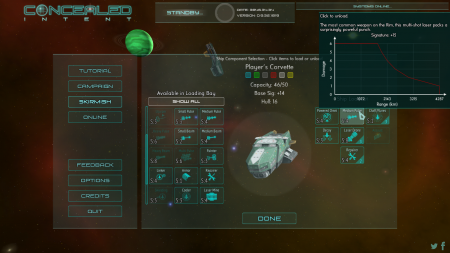 What does it do wrong?

There are minor problems with the game here and there. The interface can be a little clunky to work with at time. You have to rotate the map around to see where ships are in relationship to everywhere else, and it’s a bit of a hassle to cancel movement orders. What’s more, when the turn takes place, everything happens at once, so it’s hard to tell who did what when all the ships move and fire at the same time. This is slightly offset by a replay button, but it still takes more deductive reasoning than there should be. Finally, the game has a multiplayer mode no one seems to be playing. These wouldn’t be a problem in a well put together game, but in Concealed Intent they’re just the start of the problems the game has.

The game’s difficulty curve is all over the place. A handful of missions are so easy that it barely takes any effort to beat. The other half of the extreme here are the missions that are too hard, which are even more insufferable. There are simply too many ships in some levels, with your ships quickly being overwhelmed. Combined with how hard it can be to take down enemy ships with your limited fire power, the difficulty is downright unreasonable in the later half of the game. Sometimes the only practical way to win is to lose once or twice and memorize enemy ship positions. 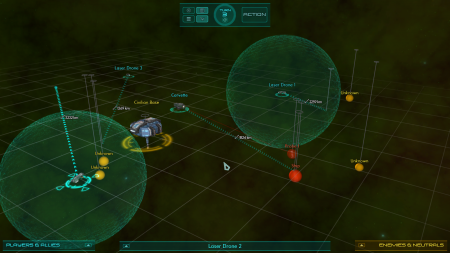 The game also, when you get right down to it, isn’t very satisfying. It’s hard to put a finger on exactly why, part of it is the low production value and part of it is how the weapons and explosions lack impact, but overall the combat just lacks a certain spark. You just don’t feel anything when you win, even if you used fairly clever tactics to do so.  There’s simply very little entertainment to be found here.

The final nail in the coffin of Concealed Intent is that it has technical issues. Issues that go beyond simply being annoying and render certain levels of the game unplayable. On these missions, I was unable to move my ships at all, making it impossible to accomplish my goals. The game is technically still in early access, but that is no excuse. It is slated to exit early access on August 2nd. Problems this glaring should not be present so close to a game’s release date. I played this game on a mac, so it’s possible that this problem isn’t present on the windows version, but I still consider it inexcusable.

Concealed Intent is simply a game that fails to grab the players attention and fails to entertain. If the levels work, they usually aren’t very fun to play, are difficult to work with, and can be frustratingly hard. The game is lifted up by its unique idea but a good idea can’t make a good game without a proper support. Concealed Intent has very little to offer in the way of entertainment or engaging challenge.

Concealed Intent simply offers little of substance and nothing of satisfaction.