Predators and Aliens and Dredds – oh my!

Good morning all, at time of writing, and welcome to another Brutal Review. I embark on an adventure in new and dangerous territory this week (well, for you 😉 -ed), comics!

But I am here to tell you that I have never read the comics these guys come from. Therefore, this will be less a review of the comics in general and more a review of this specific crossover. 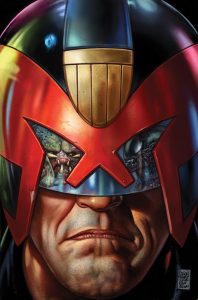 We our begin adventure with the obvious hero, Predator, being chased. His pursuers, hillbilly animals for some reasons, then trap him. They plan to introduce him to their doctor, and root through his ship too.

They manage to find a Xenomorph skull and decide that it would be brilliant if their doctor brought it back to life. Oh yeah, he can do that by the way. Already at a blistering pace, the comic drops the title like the glorious mouthful that it is, then introduces the titular Judge Dredd.

This is as far as my summary goes, because otherwise I would likely be spoiling the comic. This first comic in a, no doubt, short series sets up quite a few questions already. The most prominent, being; what were the predators doing on earth, what does this mystery scientist want with a xenomorph, and why is Judge Dredd such a gloomy-guts? 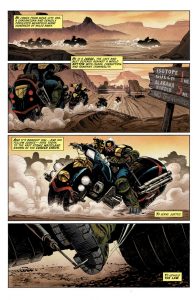 One of my previous questions is actually answered within the story, vaguely, but sharing such an answer is spoiler territory. So let’s move on. The first thing I noticed about the comic was its artwork, naturally.

Chris Mooneyham, the project artist, went to real effort to give the world a rough feeling. Most edges will have lines coming off them, and the colour scheme has a tendency for slightly darker colours. This gives me a feel for the world, that this is not a kind or forgiving place.

Characters are also drawn with a very distinct mixture of simplicity and detail. The iconic Judge Uniforms look very rough around the edges, but this is clearly purposeful.

Another thing that jumped out at me was the writing. I was very impressed at the pace the story could move at and still feel natural. I read the animal hillbilly lines in a very bad hillbilly accent, without being told that this was correct.

This may not seem like much, but this is done without the use of any kind of stereotypical phrases. The characters speak, but the sentences are constructed in such a way that I immediately put the pieces together in my head.

Story wise, however, I can predict what is coming next without even trying. This is clearly a comic about action, which is done rather well mind you, but leaves little left to the imagination. 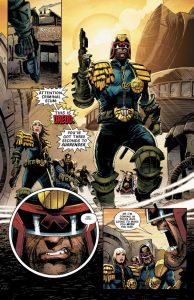 As mentioned above, I was not at all left wondering what was to come. However, the very premise of the comic kind of does away with mystery, doesn’t it?

We immediately know that Predator, Judge Dredd, and a Xenomorph will be there, and presumably will fight. What we are interested in is the winner, and how the fight comes about. While the comic introduces the settings quite nicely, the characters are less so.

I was surprised by how the transition of scenery felt so natural to me, but as soon as Dredd is introduced, the tone immediately shifts in a clunky way. One minute has us following a vulnerable creature attempting to escape the ironic role-reversal it just experienced, and the next we are the biggest bad-ass who ever lived.

I am sure, however, that this can be over looked by the hard core fans.

Leaving off, I remain uninterested in Judge Dredd as a character. He is like batman, except with less emotion and strife. Dredd is always on top of things, which makes him boring to say the least.

I was, however, interested in the genetically altered hunters in the opening scenes. And there will always be a soft spot in my heart for Predators and Aliens, which definitely increased my interest.

I can only really recommend this to fans of either Alien, Predator, or Judge Dredd. From an outsider’s standpoint however, I feel like I am missing an integral part of Dredd’s character. You know, the part that makes him interesting.

Interest vs Art & Writing vs Explosiveness

While the artwork and writing were definitely good, and the story puts you in the heat of the action, there was no real hook keeping me here. Probably because I started the series here...

Young, talented, funny, hard working, duck-like, consistently punning, the center of a collapsing star, older than time and weird. He is two of these things. Beyond that, I'll never tell...
Previous FIFA 16 – optimism Vs. reality
Next BioShock: The Collection is finally official