Nintendo Treehouse Live showed off the new Paper Mario: Color Splash game at E3, showing for the first time an extended look at moment to moment gameplay.  Previous details announced that we would be working with sentient paint bucket and floating pun Huey to bring color back to the world of Prism Island, but now we get to see just how that’ll translate to gameplay.

The previous trailer no doubt already dashed hopes of Paper Mario’s return to form, but for those of you still clinging to hope, allow me to tell you honestly:

This is not the successor that many of us have dreamed of.  This is Sticker Star 2. 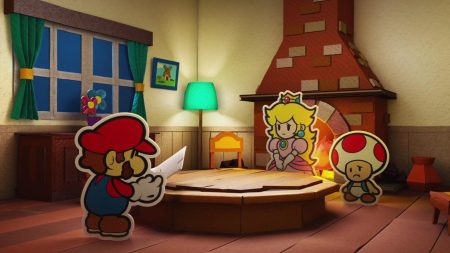 Paper Mario: Color Splash is not a story-driven RPG.  As the game’s E3 page suggests, it is an Action-Adventure title.  The game is broken up into stages on a world map a la a traditional Mario platformer.  To beat a stage, you must find the paint star at its end, and to unlock new areas (or worlds), you’ll have to beat an entire series of similarly themed stages and beat a boss to uncover more of the map. 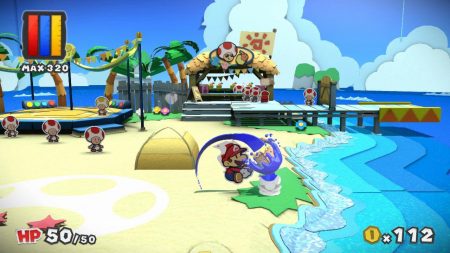 The courses of Paper Mario: Color Splash may not be set up in the same way as the earlier titles in the franchise, but they’re stilled filled with the series’ trademark humor and wacky scenarios.  The paper-craft aesthetic is pushed more than it ever has been before: it’s the first time in the series that everything is paper-craft, and, like Kirby and the Rainbow Curse or Yoshi’s Woolly World before it, the Wii U’s extra hardware helps the theme to be carried out through every corner of the world.  You can practically see the fiber in the paper, the make of every card board piece of driftwood.  Every fold in the paper is believable, and you feel like you’ve been dropped in a diorama in the making.

Combat in Paper Mario: Color Splash won’t feel unfamiliar to those who played Sticker Star.  Cards you collect will stand in as your every attack, meaning you can’t just swing your hammer or stomp on enemies’ heads with abandon.  Not only are the cards limited, but your paint resource is limited as well.  In battle, the paint is used to color your cards- the more you color a card before you use it, the more effective it’ll be in battle.  On your turn, you’ll line up a couple of these cards in a row, color them, and send the Goombas and Paratroopas packing.  Once your cards are flung at the screen, battle progresses as you’ll be familiar with: press A at the right time to deal more damage, and do the same when defending to take less.  Characters’ health is shown by how much color remains in their bodies, so you’ll always have a feel for how close you are. 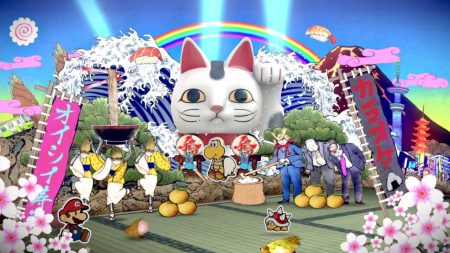 The Treehouse footage showed off a battle against a Koopaling (who are featured in the series for the first time), which showed boss battles will be similar to Sticker Star- use the right item at the right time, and you’ll be waltzing to the prize.  Fail to do so, and you’ll be met with a swift end.  It’s not the ideal wrinkle for an RPG battle system, but you have to stop thinking of Paper Mario: Color Splash as an RPG.

Because if you do, you’ll be reminded of The Thousand Year Door and the original.

Paper Mario: Color Splash retains its charm in its gorgeous visuals and delightful humor, but it seems the length you’ll get out of the title come October 7th will depend on how much you enjoyed Sticker Star’s combat, and how much you can set aside your hopes for the franchise.

For more on the humorous, mini-game like scenarios that set the courses apart, the combat that evolves Sticker Star’s base, and for a peek into the visuals that make Paper Mario: Color Splash still a title to look forward to, check out Nintendo Treehouse’s extended footage.  In the meantime, check out Super Paper Mario, which just launched on the Wii U’s Virtual Console this week.

Brutal Gamer's Nintendo Editor began his gaming life a little late- at five years old. But he's made up for it in the two decades since, gaming and writing about gaming with the same passion, fervor, and unrelenting love as his five-year old self.
Previous South Park : The Fractured But Whole Due Dec 6th
Next E3: 2016 Spec Ops the Line Writer to Write Resident Evil 7