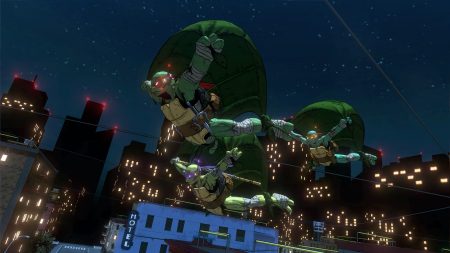 Had you going there for a second, didn’t I? Well, unfortunately Activision and PlatinumGames’ Teenage Mutant Ninja Turtles: Mutants of Manhattan is just another sub-par brawler to add to the pile. Does this mean it’s all bad? Heavens no, but isn’t good either, and here is why.

First off, I want to mention the character designs. Essentially, everything you know about TMNT is still here, Leonardo still leads, Donatello still does machines, Raphael is still cool but rude, and Michaelangelo is still a party dude, however the whole ordeal takes place in some strange, turtle-themed uncanny valley.

The turtles, in my opinion, have never looked this ugly, and yes I am acknowledging the Michael Bay monstrosities… actually no, the Michael Bay turtles are still undoubtedly uglier. On the cover art they look fine, but in-game they just make me… uncomfortable. 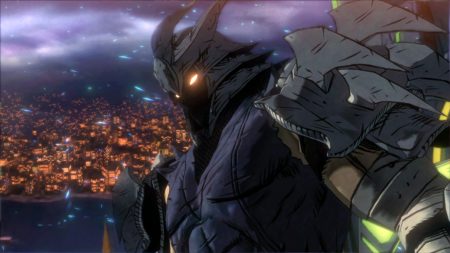 Turtles aside, the comic book art style of the game makes New York City and all of the things which inhabit it (besides the turtles, of course), look pretty cool. Boss designs look amazing as well. Some of the bosses you will encounter in the painfully short campaign are Bebop and Rocksteady (of course), Kraang, Wingnut, and Slash.

Now, let’s move on to the meat of the review. The gameplay is frustratingly repetitive, I wish I could find another way to put that, but unfortunately that’s really what we’re stuck with. Even switching between the turtles, the gameplay doesn’t feel any different. All you do is mash the same two buttons, and then once in a while you can activate a special move (sounds like NES-era controls -ed). Though the controls are painfully simple, each character does have a special move specific to them. For instance, Leonardo can slow down time (because why not), and Michaelangelo can cheer everybody on, which resets their skill cooldowns.

“But Jake,” I hear you cry, “what about multiplayer? It’s a brawler, surely it’s better in a group with friends?” Well I’m sure it would be, however -and this is the biggest arrow into the chest- I invited some friends over to try out the game with me, because of course the four player co-op TMNT brawler would include some kind of split-screen multiplayer, but nope.

If you want to play this game, clearly designed for more than one person, you have to play online. So you have to make sure all of the friends you want to play the game with own an Xbox One (or PS4), and this crappy game, before you can even play together. Otherwise, you’re left playing with complete strangers. 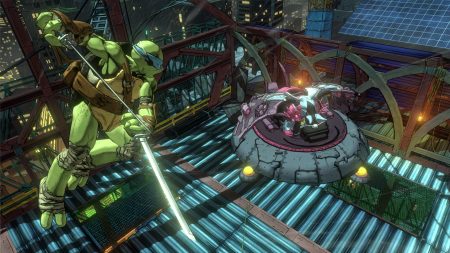 The game isn’t impossible to play single-player by any means though, it just isn’t fun. So the only thing keeping you company are the turtles and their consistently repetitive (there’s that word again) one liners.

As I said, the game isn’t unplayable, and once or twice I even found myself accidentally having fun, but without friends it’s just another beat-em-up. I mentioned this earlier, but the campaign is only about 4-6 hours long on the first playthrough, and I’m not sure whether that is a good thing or a bad thing. Teenage Mutant Ninja Turtles: Mutants of Manhattan functions, but it feels like a slog, and on top of that, it feels too short to justify a 40 dollar price tag. But then again, with the game being the way it is, would you want it to be any longer?

It’s always sad to see a great idea come to life as something bland or mediocre, especially from a developer like PlatinumGames; and reviews like this one are always hard to write. When something technically works, looks and sounds good (well, ‘cept for the Turtles themselves), but isn’t enjoyable, can you really say the game is bad? I have nothing hateful to say toward Teenage Mutant Ninja Turtles: Mutants of Manhattan, but just the same, I have nothing good that I wish to really express either.

A sad clump of standardized brawling combat, repetitive in every way, with no local multiplayer, and simultaneously too long and too short