Arena-battler game Smite is coming to the printed-page with a Dark Horse Comics-published collected edition that’ll see god vs god in The Pantheon Wars. 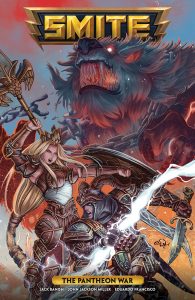 It is an age where gods live among the mortals over which they rule. The worship of mortals is needed by the gods to maintain their divinity—but the number of gods has swelled, and there are fewer mortal faithful for the individual gods in each pantheon. Only the gods who maintain worshipers will survive, and so tensions are rising among the pantheons. There is an uneasy peace…but peace is not desired by all!

To be fair, if peace was desired by all, then there’d be no need for a video game… or a comic book for that matter. Thankfully, that’s not a worry here as Dark Horse’s latest video game adaptation is all set to get to rumbling with this new graphic novel. The book will collect the three-part digital series that’s already available, bringing it all together in one physical volume.

And it’s a talent-laden volume too, with Star Wars and Mass Effect alum John Jackson Miller handling the writing for Smite, along with Jack Banish (who might have the coolest name ever). As for the pencils, you can expect to see the work of the very talented Eduardo Francisco there, so Smite: The Pantheon Wars is quite the package overall.

Look for Smite: The Pantheon Wars to be on shelves just after Christmas, on December 28th, 2016. You can pre-order a copy for yourself today at Amazon or Barnes and Noble.

Jason's been knee deep in videogames since he was but a lad. Cutting his teeth on the pixely glory that was the Atari 2600, he's been hack'n'slashing and shoot'em'uping ever since. Mainly an FPS and action guy, Jason enjoys the occasional well crafted title from every genre.
@jason_tas
Previous New Sherlock Holmes trailer investigates game’s opening
Next Team Japan takes to the ring in King of Fighters XIV