One of the best-loved characters in Street Fighter history, Cammy is getting her own 5 issue limited-run series from Udon. 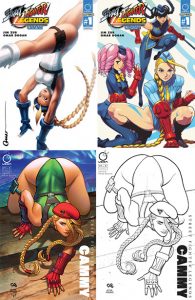 “It’s Cammy White, the stinging bee of Street Fighter, in her own action-packed comic series! Cammy now leads the all-new special ops team “Delta Blue”, as they keep England and the world safe from destructive forces. Whether its art thieves, cyber assaults, or would-be world conquerors, Cammy and Delta Blue are ready to face the enemies of freedom and justice everywhere! Plus, Chun-li faces a mysterious opponent in a special bonus story.”

So it’s two stories for the price of one in the 162-page Street Fighter Legends: Cammy, which will star two different creative teams as well. Writer Jim Zub and artist Omar Dogan will be the creative force behind the bulk of the new book (the Cammy story arc), while Street Fighter Unlimited’s Ken Siu-Chong and Edwin Huang will be picking up the story and art on the backup Chun-Li tale.

As usual too with Udon’s books, you can expect a bunch of alt-covers with Cammy’s new book. For issue #1, Omar Dogan and Rob Porter will handle covers A and B respectively. And by the end of the run, the four B covers will link together to form a larger image – Shadaloo’s “Doll Squadron”.

Cover C meanwhile, will be a blank ‘sketch’ version, while Cover D and E (I said there were a bunch) will feature the art of Frank Cho, in a throwback to… uh… that cover. You know the one, the one that wasn’t used thanks to fan outrage. The one from that big, monster publisher? Yeah, that one.

All of these variants will be on the racks at the same time, hitting this coming September.

Jason's been knee deep in videogames since he was but a lad. Cutting his teeth on the pixely glory that was the Atari 2600, he's been hack'n'slashing and shoot'em'uping ever since. Mainly an FPS and action guy, Jason enjoys the occasional well crafted title from every genre.
@jason_tas
Previous First Assassin’s Creed movie trailer released
Next Gronk hits the cover of Madden 17