Rocket League’s Hoops hit one day early tonight, bringing with it some new life for the rocket-based sports hit.

I spent some time with the new “Hoops” mode at its launch to see how it feels as an avid fan of vanilla Rocket League.

The main difference between vanilla Rocket League and Hoops is the means by which you score. Instead of aiming for a standard soccer goal, you are aiming for an enlarged basketball net. 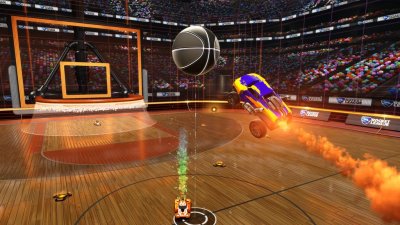 The net hangs down to the court, and players can drive through it. The balls, however, will ramp up off of the net in an arc.

The court is shrunken from the standard field that Rocket League takes place on. The smaller size fits the “hoops” game mode well, though. The shininess of the floor also feels like a real basketball court.

The other big change in the mode is the mandated four player maximum player count. In the normal modes, players can have three people on a team. This change fits the mode well, though. The smaller courts make me glad there are only four people playing at any time.

The changed objective forced players to change the way they approach the game. Air play takes on a new importance, while defense is wholly overhauled to accommodate late-net saves. It feels as though gravity has been lowered slightly, but I don’t have any actual evidence, so this is only based on how the game feels to play.

The last major change to the game play comes in the form of a tip off in the beginning of the match. Players have the opportunity to jump for the ball and get a goal right off the bat. These plays are rare, but are extremely satisfying when they come together.

This new mode offers a nice change in pace. I am an avid fan of Rocket League, but I can guarantee that Hoops won’t be the first mode I boot up when I want to play some Rocket League. To me, Rocket League is about the pitch, not the court. Hoops is a great distraction for people who want to break from the traditional formula while still enjoying rocket sports.

A new mode will never be unwelcome in Rocket League, although, Psyonix will definitely be hard pressed to find something to surpass the original game modes.

Erich was introduced to gaming by his grandfather before he could walk. Since then, he has grown up loving Nintendo and most games in general. He couples his love of videogames with journalism to cover news, provide reviews and tell it how it is in the gaming world.
Previous Rocket League Hoops, a basketball update, is now live
Next Lionsgate films available via Steam