Hands on with Battleborn’s Open Beta 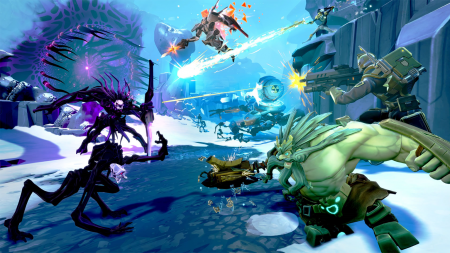 In a season of Character-driven action and FPS titles, which includes the likes of Blizzard’s much-awaited Overwatch, it wouldn’t be hard to forget a few here or there. Of course, you’d be hard-pressed to forget about Battleborn, when it comes from Gearbox, the studio behind Co-op party franchise Borderlands.

But just in case you did, in the long wait from announcement to game, here’s the basic rundown:

Battleborn features (at launch) 25 heroes, which span the likes of a penguin riding a mech to a mushroom ninja, who vie for dominance in several competitive modes, or work together to save the universe from the end of all times in co-operative, story driven missions. Each match, whether competitive or co-operative, features minor MOBA elements- you start from level one every time and unlock new skills as you go; you spend gold earned in-match to buy stat upgrades; characters fill different roles, whether assassin, support, or tank. The beta’s two competitive multiplayer modes even feature waves of creeps pivotal to completing the objectives.

But in practice, the game feels much less like the traditional MOBA experience, and much more like the fast-paced, kill-focused FPS experience. Even if some characters carry swords. 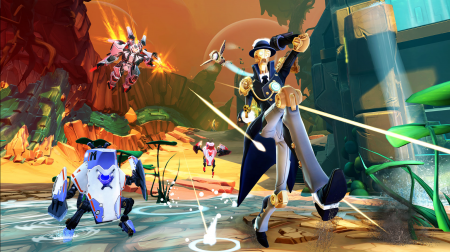 The Open Beta has two maps and two modes available for competitive multiplayer, and two missions for co-operative play, as well as a wealth of unlocks that give a strong indicator to how the gameplay loop will feed into progression come release (progress is not carried over from the beta, but there will be in-game rewards for those who did jump in).

The co-operative mode feels familiar to Borderlands in its shooting mechanics (supposing you’re someone with a gun, that is), and its colorful, cel-shaded aesthetic. Minus loot-drops and levels, the general action is the same as well: you blow through hordes of enemies (especially robotic) while characters, like first boss ISIC, chastise you over the loudspeaker. Players start from level one each time, and work towards unlocks in a system that carries over between each mode: leveling a character’s profile means unlocking skins, taunts, and more options for in-match leveling.

The co-op seems like it’ll be great fun to play with friends, especially on harder difficulties, as the bosses are involved and the general firefights are entertaining.

But the real pull of the Open Beta for me has been the competitive multiplayer- a surprise, since I was originally picking it up exclusively for the Co-op.

The 25 playable characters (all of which are unlockable in the Open beta) each play uniquely from each other, and run the gamut from gunt-toting marine Oscar Mike, who will feel familiar and easy to FPS aficionados, to sword-wielding Rath, who shares more in common with MOBA champions like Garren, with his melee attacks, crowd control (abilities which take away control over a player character), and spinning ultimate. They each feature different basic attacks and cooldown driven abilities. Some have guns. Others shoot magic beams from their staves. The sniper lays flying owl-mines that can be leveled in match to be invisible or pass through terrain, depending on your taste, or the match’s requirements. Skills will sound familiar to MOBA players. Most melee characters have dashes. Casters have area of effect damage. Supports have heals and shields and everything in between.

But the pace of the match is where Battleborn leaves MOBA inspirations behind- and, ideally, picks up those disinterested in the genre.

Incursion, the game’s first (and best) competitive game mode, stars a map (Overgrowth) that features a single lane that brings all players directly down the middle with wave after wave of creeps. Unlike most MOBAs, however, the ever dominating defensive pressure of towers is less apparent, as towers are easily destroyed (and rebuilt with gold earned in-match, either over time or by finding them in abundance along the ground-in fact, a quick run of the map yields more than enough money for a turret or two), and while their damage is certainly noticeable, it won’t drop low-level champions in a matter of seconds.

Two imposing sentry robots stand between you and defeat- or victory, depending on which team they belong to. Their huge shields drop more quickly when minions are around, but pushing waves is less required for victory than in most MOBAs- and farming even less so. Matches and fights break out and happen too fast to spend too much time away. The quicker start feels much more like an FPS than a MOBA, in that the only thing really keeping you from the action is the distance you have to cross to find the middle of the map.

Once both sentries have been destroyed, the match ends- or, if the timer is reached, in which case whichever team closest to victory takes it. The timer is a boon to those who know the often unbelievably long MOBA match-times that reach into the hour and a half mark and ensure every time you sit to play requires an unforeseeable time commitment.

It’s hard not to compare Battleborn to the MOBAs I’ve played in the past, including the recent Paragon, because the mode I primarily enjoy is so obviously inspired by them. But truthfully, even with towers, minions, in-match leveling and item purchases (and even something akin to jungle camps), the moment-to-moment action feels nothing like the genre staples. It’s an action game. Often, an FPS. It has their pacing, their feel, their adrenaline. Team-fights don’t feel like team-fights, even if every member of the game participates often in bouts of combat. It’s more like when squads meet up in Battlefield, or when teams in Call of Duty contest over terrain with particularly noticeable advantages.

Incursion is a fantastic game mode, and startlingly intense and player-focused, and every character feels like they bring something valuable to the map. 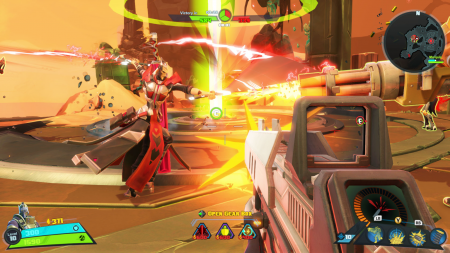 Unfortunately, I’m not as fond for the second Multiplayer mode, Meltdown. The mode, which takes place on a completely different map called “Paradise,” involves escorting minions to machines that grind them into paste- and points. The larger the minion, the more points on offer, and the first to 500 wins. The Paradise map offers a two-lane structure, splitting up the constant team-fight orientation of Incursion for skirmishes that often feel like a waste of time whenever they take you away from the creeps. The map feels larger than necessary- large swaths have gone unused in the matches I played, save those rare moments where a player needlessly chases down an escaping foe. Compared to Overgrowth, in which every corner felt like a valuable fighting space.

Unlike Incursion, where you’re a part of the objective at all times, where all the action is local and constant, Meltdown ensures points are happening elsewhere by design. While this requires constant communication and team play, it lacks the centralized objective of traditional MOBAs, making it feel like you need to be in two places at once, but can’t be (though the map is not so large you can’t try your best).

To help alleviate lobby wait times, Battleborn currently puts players in the same queue for competitive multiplayer, meaning you’ll be voting against the other 9 players for the mode of your dreams. Hopefully this won’t remain in the full game upon launch, as it’s been the difference for me so far between having fun- and wishing I was. (Editor’s Note: The lobbies have once again been separated)

Unfortunately, the game (including both competitive modes) retains the MOBA genre’s infuriating death timers: go down in the late game, and you’ll be sitting out for sometimes over a minute at a time. When matches can be as short as 10 (sometimes less) or as long as 30, that time adds up.

Handsome Jack fans will be glad to know Gearbox’s signature humor has transitioned into competitive and co-operative multiplayer intact. From character designs (like the afore-mentioned Penguin in a mech suit) to taunts (which include luchadores El Dragon counting to three in colorful numbers), the game doesn’t lack inherent charm. Even the start-up sequence, in which players choose their first augment as the game mode is explained to them, is light-hearted. When the countdown begins, the pleasant computer voice delivers several different lines (“My favorite numbers are 3, 2, 1” or “Fight to the death in 3, 2, 1”- among others).

Of course, nowhere is humor more evident than in those co-operative missions, where a boss robot’s fate is decided by his strict adherence to his spider roleplay.

Battleborn’s Open Beta will be available on PC and Xbox One on April 13th, and is available on PS4 now. The beta runs until April 18th, when it ends at 7AM PST. PS4 players who participate in the Open Beta will get the first DLC Pack for free, including instant access to new character Alani upon release. If you also order the Season Pass, you’ll be given a key that lets you instantly unlock any hero in the game. Toby, the penguin with a mech, is only available on PS4 during the beta.

PS Plus is not required to participate in the Open Beta.

Battleborn launches May 3rd this year.

Brutal Gamer's Nintendo Editor began his gaming life a little late- at five years old. But he's made up for it in the two decades since, gaming and writing about gaming with the same passion, fervor, and unrelenting love as his five-year old self.
Previous Godzilla has a case of atomic breath in latest Funko Pop! exclusive
Next King of Fighters returns from SNK and Atlus