Finally revealed, Deathmate is a Bloodshot even hitting this Summer called Bloodshot Island… and a new villain that’s set to take down every super-soldier to ever have emerged from Project Rising Spirit. 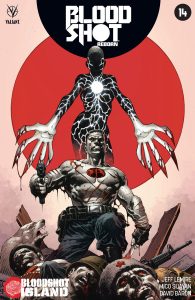 Stranded on a mysterious desert island with no recollection of how he got there, Bloodshot is running for his life! But as he tries to make sense of his surroundings, he’s quickly discovering that this is no ordinary tropical paradise… Surrounded by decommissioned relics of the same bloodstained project that created him – World War II Bloodshot, Cold War Bloodshot, Vietnam Bloodshot, and other antiquated experiments – Bloodshot is about to find out where Project Rising Spirit sends it old soldiers to die…and then rejuvenate and die again! Can this seasoned band of killers trust each other long enough to survive the threats that lie in the jungle around them…and unlock the secret at the heart of the island’s existence before they’re each permanently retired? And just what is the sinister force called DEATHMATE that now hunts them at every turn…and what is its untold connection to the life Ray Garrison left behind?

That’s different -very different- from the event that bore the Deathmate name before. If you have no idea what I’m talking about, then the long and the short of it is that Deathmate was a Valiant/Image crossover event that took place in the 90s.

But Deathmate 2016 has seemingly nothing to do with that inter-company crossover. Focusing on Bloodshot and the brand new threat known as Deathmate, what starts off in the pages of Bloodshot Reborn, and on the locale of Bloodshot Island, is all-together different.

“DEATHMATE isn’t an event or a crossover – she’s much, much more. This is an all-new character, created by Jeff Lemire for BLOODSHOT ISLAND and brought to life with a brilliant design by Jeff, Mico Suayan, and David Baron,” said Valiant Editor-in-Chief Warren Simons. “The secret of her creation and purpose is a central mystery  to BLOODSHOT ISLAND – and, in the very first issue alone, she cements herself as Valiant’s newest A-level threat. Moreso than anything that’s come before, BLOODSHOT ISLAND is Jeff and Mico firing on all cylinders for what is sure to be BLOODSHOT REBORN’s biggest, most action-packed storyline to date. But it’s not just bullets and Bloodshots… By the time the smoke clears, the mythology behind one of Valiant’s most popular and enduring heroes – and his importance to the broader Valiant Universe – will be forever changed by the revelations that lurk within the jungle of BLOODSHOT ISLAND.”

Bloodshot has pretty quickly assumed one of the top positions in the Valiant U, with both the publisher itself and fans, so it shouldn’t come as any surprise that he’s the center point of Deathmate. Bloodshot Island is promised to be the culmination of writer Jeff Lemire’s Analog Man arc in Bloodshot Reborn too, which should make you instantly take note if you’ve been following the excellently-told tale up to now. As usual, Mico Suayan will be picking up the art chores here as well, which is even more good news.

And for those of you who can’t get enough of kick-ass variant covers, you’ll be happy to know that there’ll be a bunch. And from talent like Tomas Giorello, Ben Oliver, Kano, Stephen Segovia, Clayton Henry, Ryan Bodenheim, Darick Robertson, Tomas Giorello, and Jeff Lemire (yes, all those artists are representative of individual cover art), you just might not want to miss one of ’em.

Bloodshot Reborn #14 ushers in Bloodshot Island part 1 this coming June. Check out our lengthy preview below for more.

Jason's been knee deep in videogames since he was but a lad. Cutting his teeth on the pixely glory that was the Atari 2600, he's been hack'n'slashing and shoot'em'uping ever since. Mainly an FPS and action guy, Jason enjoys the occasional well crafted title from every genre.
@jason_tas
Previous LEGO Dimensions expands with new characters and Midway level pack
Next Hitman (PS4) Impressions