Marvel’s mutant populace is about to go head to head with the Inhumans and their new prophetic member, and Magneto is ready to lead the charge. 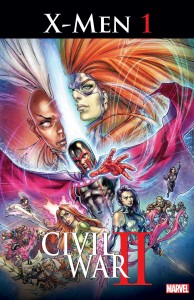 As the heroes of the Marvel Universe stand against one another, the Mutants will face their own war. This June, the X-Men prepare for war in CIVIL WAR II: X-MEN #1 – a new Civil War II series from writer Cullen Bunn  (Uncanny X-Men) and artist Andrea Broccardo (Kanan: The Last Padawan)!

Terrigen Mists encircle the globe, igniting the Inhuman race while simultaneously crippling mutantkind. As conflict between the two nations simmers below the surface, a new Inhuman with the ability to profile the future has emerged. As heroes of the Marvel Universe battle over whether to use this Inhuman’s ability or not – one mutant will take matters into his own hands. Fearing this untapped power may tip the scales in the Inhumans’ favor – Magneto is willing to wage war with the Inhumans and even his own kind to prevent that from coming to pass!

“I certainly hope this story divides the fans in terms of who is ‘right’,” says writer Cullen Bunn in an upcoming interview with Marvel.com. “One of the things I’m excited about with Civil War II is that there are so many questions, debates, and positions that are going to rise from it. In Civil War II: X-Men we’ll focus on the mutants and the specific positions they are taking.”

No longer sitting on the sidelines, Magneto will use his terrifying and awesome power to take mutantkind’s fate into his own hands! Though he may be surprised who stands with him…and who stands against him! The battle lines are drawn this June in CIVIL WAR II: X-MEN #1!

For more information, visit Marvel.com later today for a full interview with the creators!

So there’s two big events in Marvel this Spring/Summer, and both of them star mutants in some way. You’ve got to be happy about that if you’re a big time Marvel fan. It’s not like the X-Men have been completely AWOL over the last few years, but there’s been this constant rumor that Marvel is ‘doing away’ with the line and its characters. That’s spun out of the fact that Disney doesn’t own the X-Men characters as goes feature films, as they belong to Fox, but it certainly seems like that’s less and less the case.

Coming off of several co-starring roles in Marvel’s most recent event books, the X-Men are getting the crossover treatment in both Apocalypse Wars (which seems oddly in-sync with this Summer’s X-Men film) and Civil War II.

I wasn’t super clear on what CWII was all about, but the more I hear, the more I like it. Mutants aren’t doing well after the Inhuman’s Terrigen Mists encircled the globe, and now it looks like they’re prepped to strike back en masse, thanks in no small part to Magneto. As a monster X-Fan myself, I couldn’t be happier.

Now all Marvel has to do is make Magneto a clear cut and proper villain again and I’ll be in mutant heaven. And I’m starting to think that’s not too much to hope for.

Jason's been knee deep in videogames since he was but a lad. Cutting his teeth on the pixely glory that was the Atari 2600, he's been hack'n'slashing and shoot'em'uping ever since. Mainly an FPS and action guy, Jason enjoys the occasional well crafted title from every genre.
@jason_tas
Previous Microsoft To Close Lionhead & Press Play
Next Project Guard landing on Wii U next month with a Star Fox makeover