Some of the first Suicide Squad merch hitting stores to coincide with this Summer’s big screen debut for the team, this new series of statues casts all the big names in three-dimensions. 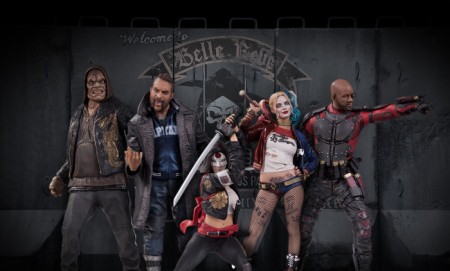 Designed to mirror the movie designs of these characters, some of the biggest baddies in the DCU, this new series from DC Direct sports some excellent likenesses. Will Smith, Margot Robbie, Jai Courtney and all the rest look terrific- right down to Jared Leto’s Joker.

Sculpted in the 12″ scale, the first wave of these bad boys is scheduled to land at retail in July, to be followed up with wave 2 in August. And that second wave is timed to arrive just in time to finish off the set for the launch of the movie itself, which opens up on August 5th.

Each statue will run you $150.00 USD, so completing that collection wouldn’t be cheap. They’d look pretty damn good on the old shelf though. Here’s how the waves break down:

Jason's been knee deep in videogames since he was but a lad. Cutting his teeth on the pixely glory that was the Atari 2600, he's been hack'n'slashing and shoot'em'uping ever since. Mainly an FPS and action guy, Jason enjoys the occasional well crafted title from every genre.
@jason_tas
Previous X-O Manowar #44 (Comics) Review
Next Bloodshot Reborn #12 goes deep into the wasteland